The World YWCA has one of the loudest collective voices in speaking out against violence against women around the world. Annually, the YWCA observes the Week without Violence which involves a week-long series of community events promoting diverse approaches to creating a world free of violence. This year, we continue our global initiative with the NoXcuses campaign. There is no excuse for violence against women and there is no excuse for ignoring it.

Member Associations in over 120 countries offer intergenerational, age-appropriate responses that ensure women, young women and girls, understand and can exercise their rights while simultaneously advocating for increased legal and policy protection.

Indeed, violence against women (VAW) is the most pervasive human rights violation today and a major global concern. While it has always existed - due to gender inequality, imbalance of power, and women's lack of access to and control over resources - we are now seeing new forms such as cyber bullying and sexual exploitation, fictional violence through social media, and female to female violence.

Significant global commitments to combat gender based violence already exist through the Beijing Platform for Action and the Convention on the Elimination of all forms of Discrimination Against Women, and yet violence continues to affect at least one in three women worldwide.
YWCAs around the world are working hard to address this widespread problem by challenging harmful social and cultural norms and practices in order to advance women's rights and promote zero tolerance of violence; ensuring access to justice and legal protection for women survivors of violence and an end to impunity for perpetrators; creating safe spaces for women and girls experiencing violence and discrimination to access support and empowerment; accelerating efforts to prevent early and forced marriage and support services to girls who have already been married at an early age; and promoting respectful relationships among men and women, boys and girls that transform negative gender stereotypes and promote gender equality.

As the world begins the process of implementing the UN Sustainable Development Goals, the World YWCA is significantly involved in putting women's rights at the heart of decision making and implementation including an end to violence against women. Ensuring that the voices of young women are heard and that their opinions and the challenges they face is a key focus for the World YWCA. From defining the "Future Young Women Want" to participating in various consultations of the UN High Level Panel on the Post 2015 agenda, the World YWCA has advocated for the elimination of violence against women to be a central priority.

The violent realities faced by women and girls provides a compelling argument and an echo to the global call for stronger and clearer commitments to ending violence against women in the new sustainable development goals. The lack of economic empowerment of women and the violation of their basic right to education, health and a life free of poverty contribute and perpetuate VAW, Abuse, rape, victimisation and femicide speak to the importance of protecting the fundamental rights of citizens and the importance of a strong legal system within democratic institutions that promote peace and human dignity. 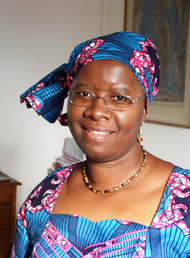 Nyaradzayi Gumbonzvanda is the World YWCA General Secretary. She is a trained human rights lawyer with extensive experience in conflict resolution and mediation. For some twenty years, she has been working on issues of women and children's human rights, with a special focus on crisis countries. Among other accolades, in May 2014 she was named Goodwill Ambassador of the African Union Campaign to End Child Marriage, further consolidating the World YWCA's important work on ending child, early and forced marriage in a single generation. Follow Nyaradazayi and World YWCA on Twitter: @vanyaradzayi, @worldYWCA.