Samuel Johnson, author of the first English dictionary, wrote "Claret is the drink for boys, port for men, but he who aspires to be a hero must drink brandy." By that definition, Scandinavian glögg will make us saintly.

Glögg, pronounced more or less like gloooog, is a sweet, high-octane, mulled wine, which is to say it is made with a potpourri of spices and all three of the above: Claret (red wine), port, and brandy. Because it is served warm it is especially popular around Christmas. It is the perfect cold-weather drink for après ski or après shoveling, warming the body and soul from the inside out. My wife and I have been making this recipe since 1974 and we are certain that we get party invitations more for our glögg than for our wit and charm.

How does it work? The warm liquid raises the temperature of the mouth and stomach slightly, and because alcohol is a vasodilator, it forces blood to the skin, making us feel warm and blushing on the outside.

The Greeks and Romans were known to "mull" wine by adding spices to enhance its flavor and because it was thought to have health benefits. Probably because it was thought to be healthful, in a stroke of early marketing genius, English wine merchants in the 1500s named a spiced wine Hippocras after Hippocrates, the famous Greek physician who lived about 400 years BCE and is often referred to "the father of medicine." 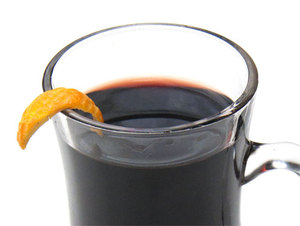 According to the Wine & Spirits Museum in Stockholm, King Gustav I Vasa of Sweden was fond of a drink made from German wine, sugar, honey, cinnamon, ginger, cardamom and cloves. It was later named "glödgad vin" in 1609, which meant "glowing-hot wine." The word "glögg" is a shortened form that first appeared in print in 1870.

Its popularity spread throughout the European nations and in the 1890s it became a Christmas tradition. It was often used as a health potion, and I prescribe it often for a wide variety of ailments, especially muscle strains induced by shoveling snow.

Here is a recipe from 1898 taken from the blending manual of an unidentified wine merchant.

Originally glögg was a bit less hearty, but a recipe from 1898 shows it was made with sediment from port wine barrels, full bodied red wine, Cognac, sherry, sugar, cinnamon, cardamom, almond, raisins, and vanilla pods, not dissimilar from today's recipes.

There are as many recipes for this old traditional winter beverage as there are for martinis. Instead of brandy, most Swedish recipes calls for aquavit, a distilled spirit frequently flavored with caraway seeds. Finnish gluggi often has vodka. Outside of Scandinavia, the Germans make a variation called glühwein (glow wine), often with a white wine base, and in Ireland it is made with (what else?) Irish whisky. In the US, I've tasted it made with bourbon. But I prefer the taste of glögg made with brandy.

The spices and flavorings change just as freely, with most recipes calling for cardamom, cloves, cinnamon, orange peel, raisins, almonds, and sugar. Some people use dried cherries. Some swear by dried orange peel, others use fresh. Sugar content can be varied according to taste, and I have tasted it made with honey and maple syrup. Some brew it and drink it on the spot, and others age it. I usually do both. My wife and I like to make some for after dinner on Thanksgiving, and then we age some for Christmas and the rest of the winter. We have been making glögg since 1974 and refining the recipe since then. In 1979 I published my recipe in my column in the Chicago Tribune and that triggered many letters with new recipes, some aspects of which I have incorporated into the recipe below.

The aroma of mulling glögg is heavenly, and when it is served steaming hot in a mug after a hard day of skiing or shoveling the sidewalk, the body offers thanks. Glögg also makes a good marinade for beef or venison. Here is my tried and true recipe.

About the wine, port, and brandy. There is no need to invest in expensive wine, port, or brandy because the spices are going to pre-empt any innate complexity of a fine wine, but don't use anything cheap. Remember, the sum will be no better than its parts. If you want to play, instead of brandy try using Swedish aquavit, a caraway flavored vodka popular in Scandinavia.

About the raisins. Golden raisins will work, but dark raisins are better.

About the cardamom. Cardamom comes in three forms: Pods, seeds, and powder. The pods look like orange seeds. Cardamom seed pods may be hard to find, so you may need to order them from a spice specialist like Penzeys.com, but don't leave out the cardamom. Cardamom is the secret ingredient. The seeds within the pods are either black or tan, about 1/3 the size of peppercorns. If you can't find pods and can only find seeds, use about 1 teaspoon of them. Do not use powder.

About the almonds. It is important to get naked cream-colored almonds that have had the shells and brown skins removed. The skins are bitter and full of brown coloring that can give the glögg a dusty texture. Do not use salted or smoked almonds. If you can only find almonds with skins, you can remove them by blanching them. Here's how: Boil a pot of water, dump in the almonds, wait for the water to boil again, let them boil for about a minute, pour off the water, and rinse with cold water, and drain. The skins will slip right off if you pinch them.

About the cloves. Do not use powdered cloves.

Warning. I had a reader once complain that the recipe was way too sweet. This is a sweet drink to begin with, but upon further investigation I learned that he let is steep in a slow cooker for 12 hours. Water and alcohol can evaporate from a slow cooker (notice the grooves under the lid). This is to help keep the top of the meat cool during braising, a subject for another discussion.

Do this
1) Crack the cardamom seed pods open by placing a pod on the counter and laying a butter knife on top of it. With the palm of your hand, press on the knife. It will crack it open so the flavors of the seeds can escape. You can leave the seeds in the pods once they are cracked.

2) Pour the red wine and port into a stainless-steel or porcelain kettle. Do not use an aluminum or copper pot since these metals interact with the wine and brandy to impart a metallic taste. Add the cinnamon, cardamom, cloves, orange peel, raisins, and almonds. Cover and simmer. 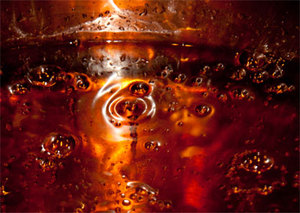 3) Put the sugar in a pan and soak it with half the brandy. Warm over a medium-low flame and stir occasionally until it becomes a clear, golden syrup and all the sugar is dissolved (shown at right). Let it simmer for about 15 minutes until the tiny bubbles become large burbles. This starts caramelizing of the sugar and adds a layer of flavor.

4) Add the sugar syrup to the spiced wine mix. Cover and let it simmer over a low heat for an hour.

5) Taste. If you wish, add more sugar or brandy. If you do, go easy, 1/4 cup at the most. As my barber says, "I can always cut more off but I can't put it back on". You can always add more brandy, but if you go over the top, you can't get back under.

6) Strain to remove the spices, almonds, and raisins. You can serve your glögg immediately or bottle it in clean used wine or whiskey bottles. A month or two of aging really enhances the flavors and marries them beautifully. A year is even better. If you are going to age glögg for more than a month or two, fill the bottles as high as possible and seal them tight. You don't have to lie them down to age, and if you use used corks, they might leak where the corkscrew entered if you lie them down. A good glögg will throw a thick purple sediment as it ages, but that doesn't become a problem for months. It's just normal settling of particulate matter held in suspension as well as compounds in the wine coming out of solution as they combine with oxygen in the aging process. Just pour gently and don't shake the bottle and discard the sediment when you get to the bottom of the bottle. Tastes like mud. 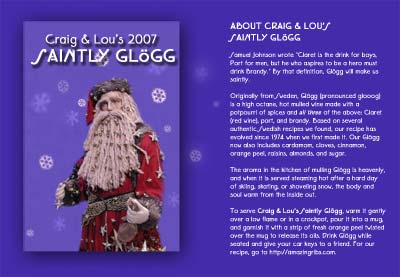 7) Fringe benefits. Do not discard the raisins and almonds when you are done, they are impregnated with flavor! I put the raisins in a jar in the refrigerator, and my wife bakes them into panettone, an Italian raisin bread (after I snack down a few handsful). I roast the almonds in a 225°F oven for about 90 minutes and munch them as snacks during a football game.

8) Serving. To serve glögg, warm it gently in a saucepan over a low flame or, better still, in a slow cooker. Serve it in a mug and, don't skip this, garnish it with a strip of fresh orange peel, twisted over the mug to release the oils. Drink while seated and give your car keys to a friend.

9) Bottle some in a clean tight bottle with your own label. It makes a super gift.

What is your favorite après ski or après shoveling drink?