The year was maybe 1971. My two daughters, eight and ten, greeted daddy as he walked into the hotel room. We were attending his convention in Puerto Rico and had just come back from the beach.

"Daddy, guess who the speaker is going to be for the ladies! Mommy is really excited about it because it's going to be Glorious!"

"I told you. Glorious! That's her name!"

"Teinem!" said the older one. "And Mommy says she is changing the world."

My husband looked at me, laughing, and said, "Who's on First?"

"Just Glorious!" said the younger one. "She's the only one on the program."

We looked at each other, my husband and I, and nodded. We'd introduce them to Abbot and Costello later on.

"I left a note in Glorious' box at the front desk," I said. "I asked for an interview with her."

"Now what makes you think she's interested in talking to a columnist from Salt Lake City?" he asked, taking off his tie and shirt and getting out his swim trunks.

I think I threw a towel at him.

Just then the phone rang. "Is Terrell there?"

"This is Gloria. I would love to talk to you. Why don't we meet for breakfast?"

"Oh, Gloria, I am thrilled. My husband says you are too famous to want to talk to a local journalist."

She laughed. "Well, that's the difference, see. I'm not famous."

Right, I thought. "He asked why you'd be interested in a columnist from Salt Lake City."

"Because I want to know more about Mormon women."

Well, of course. The Equal Rights Amendment was being debated county-wide, and Mormon women were being told by their husbands and bishops to oppose it. I didn't care why she wanted to meet me. I was just thrilled that she did. And my wonderful, supportive husband was in shock. He asked if he could come too. I said not a chance in hell. 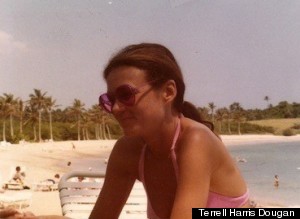 So the next morning, as I was getting over being dazzled by sitting across from this gorgeous woman in rose-colored sunglasses, she asked, "What is it about the ERA that frightens them so much?"

"The leaders of the LDS Church really don't want women to be the wage earners. To them it means mothers abandoning their children to day care or nannies. They think it will be damaging to children to have absentee moms."

"What if the dads stay home and be the nurturers and the housekeepers?"

"This has either not occurred to them, or none of them can imagine a man being able to do such a difficult and relentless unpaid job."

"And that," she said, "is why I am not going to have children. I know exactly who would have the whole responsibility, twenty-four seven."

Why had this not occurred to me until way too late? We married young, as Mormons do, and had children without even thinking about it. In the ten years since we'd had our first child, my husband's and my envy of each other had escalated. I envied his power (he had the checkbook, and the credit cards). He got to get dressed up and go out of the house every day and be in the world. He envied my time. In his mind, I was the free one, who could wear pajamas all day if I wanted to, or go where I wanted during the day and he just worked and paid for everything. We both felt overwhelmed with our roles, and neither one of us felt that we had any free time at all.

I told Gloria how much I admired her and the message she was spreading, again to standing ovations. I told her if it weren't for her, I could never get a credit card in my own name. And someday, I was sure, women would understand that stiletto heels that hurt your feet should be outlawed. All our emphasis on makeup was stupid. She laughed. "I am not sure about that one. I'm always dieting, I worry about looking good, I hate my jawline. That's why I have this hair style: to hide my jaw. We women are so nuts about beauty, and I'm one of the worst." 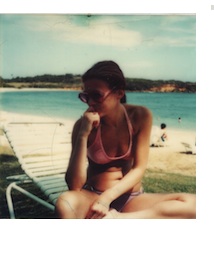 "Glorious" gave a speech at the convention that addressed all that and more. It suggested to the many men standing around the perimeter of the room at the Ladies' Lunch that the future would hold some hope for all couples. She drew verbal pictures of stay-at-home dads, and happy executive moms, and how much better off children would be if they could get to know their fathers. While some of the men just shook their heads, the women in the room gave her a standing ovation.

Oh, how I admired her! That afternoon we went to the beach again, and there she was, in a pink bikini, gorgeous enough to be a model. But that career was the furthest thing from her mind, I am sure. She let me take her picture as women gathered around her to tell her their stories. See above and below.

When I got home, my newspaper, owned by the Mormons, would not print my article. They did not want to acknowledge her existence. But the Women's Resource Center at the University of Utah grabbed it and ran with it.

Thanks to those women at the University of Utah, she came to speak in Salt Lake City. I got to drive her to the airport, and we talked (and laughed a little) about our life choices, the trade-offs we make, and how we choose our chains.

A decade and a half later, she was back again, speaking at a local bookstore to promote her book. It was such a huge crowd that her speech had been moved to the center of the mall. People were on the second floor balcony by the escalators, because the first floor was jam-packed.

I couldn't go to hear her because in my arms was a little redhead baby girl, eight months old. We had grocery shopping to do. I so wanted Gloria to have a look at her, but hundreds of women of all ages, and men, too, stood between us. So I went into the grocery store, put my granddaughter in the grocery cart, and realized I had chosen this very life, and if I had chosen differently, I wouldn't have this wondrous child in front of me. She listened intently to me and repeated as best she could the names of vegetables I handed her. I was so filled with joy I couldn't even envy the women who got to hear Glorious. My car was near enough to the door that I could hear one of her lines that brought applause: "Well, maybe this is the time you tell your husband, 'Pick it up yourself.'" And I knew I was now on another planet.

That red-headed grand-baby is now a journalist herself. A few weeks ago she was going through some polaroids I had in a shoebox, she said, "Who is this babe in the bikini?"

She stopped sorting and stared at me. "You met Gloria Steinem? You MET her?"

"Yeah. So did your mom. And later on, so did you, sort of. But you were only eight months old at the time."

"... Did anything but go to the grocery store and make dinner and do the laundry?" I bent down and kissed the head of my red-headed journalist, who looks fantastic in her bikini, by the way.

I didn't have a career -- instead I had little jobettes. They were nothing huge, but they were enough. I'm not sure any woman has it all, no matter what work she does -- not even "Glorious." But what we do have is often damn good.

3 Cleaning Products For Anyone Who's Frankly Insulted By Messes