Researchers have found the remnants of a medieval castle hidden beneath a men's prison in Gloucester, England, shedding new light on the regal architecture once present in the city.

While recently examining the area for proposed plans to redevelop the prison, Cotswold Archaeology researchers unearthed a wall of the 12th-century castle's tower and nearly 900 artifacts, including well-preserved pottery shards and bone dice, the archaeological services company announced on Monday.

"We are surprised by what we found; we knew there was a castle but had expected more of it to have been destroyed," Neil Holbrook, an archaeologist and chief executive of the company, told The Huffington Post. "We are still uncovering our history in Gloucester, and this is another reminder of the rich heritage that the city has."

Gloucester has been home to two medieval castles. The first was built east of the prison site, according to the researchers, and then replaced by a new stone castle around the year 1110. The recent discovery is believed to have been the latter, which would have been comparable in size to the White Tower at the Tower of London, Holbrook said.

The researcher told BBC News that the castle was demolished in 1787 and the walls had "never been seen in the last 200 years" until now.

See what medieval remains have been found beneath the former Gloucester prison by @CotswoldArch pic.twitter.com/FG13FyOjGv

In 1791, the Gloucester prison received its first prisoners ,and remnants of the castle were buried beneath the jail's exercise yard. The archaeologists noted that the new findings will be analyzed and protected until the redevelopment of the prison site takes place. 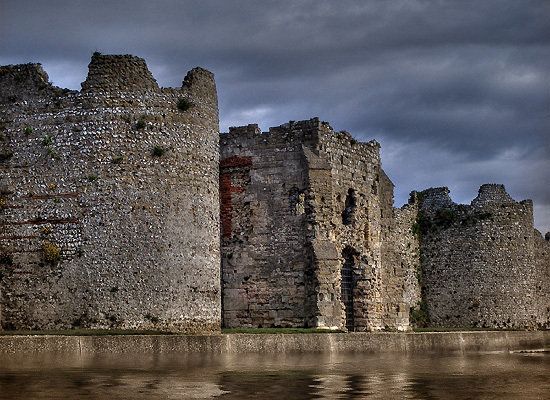 1 / 14
Portchester Castle
With its vital strategic position in what is now Portsmouth Harbour, it’s unsurprising to find that the site of <a href="http://www.historvius.com/portchester-castle-968/" target="_hplink">Portchester Castle</a> has posed a draw for numerous military thinkers over the centuries, including the Romans, the Normans and the Plantagenets. In fact, the Roman walls still seen at Portchester rise up to a height of six metres - the highest such walls to be seen intact in Britain. Still vast and undeniably imposing, Portchester Castle’s presence and beauty is impossible to ignore. <em>Flickr: scalespeeder</em>