One of the most common childhood phobias is fear of the dark. A pair of U.K.-based entrepreneurs are hoping their "magical" duvet cover will eradicate that fear once and for all.

Davide Russo and Charlotte Cramer are the creators of Glow Away, a duvet cover and bedtime storybook that "harness the power of children's imaginations" to help them overcome their fear of the dark, their Kickstarter page states. The book tells the story of a little boy name Sam who is afraid of the dark -- until he meets "the yellow fellow" Boo. After Boo teaches Sam a magical spell to protect him from monsters at night, the little boy is no longer afraid. The Glow Away duvet features a picture of Boo, and when you turn off the lights, the words of Boo's spell illuminate on the bed. 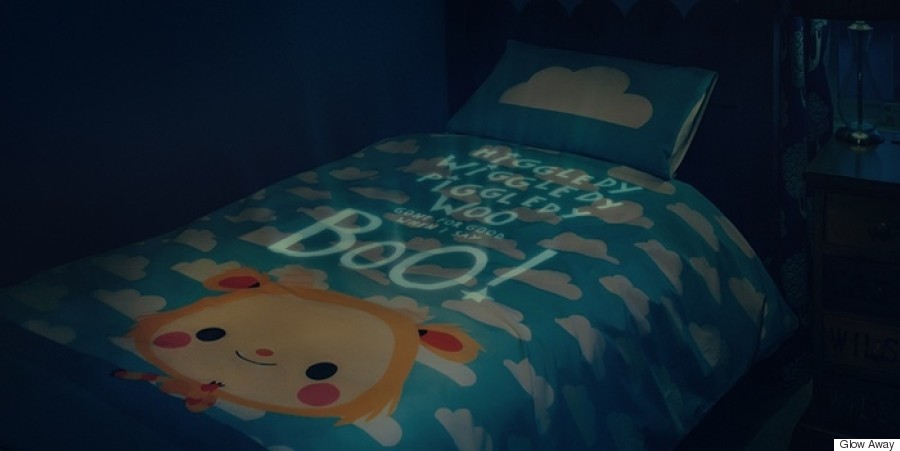 Russo and Cramer came up with the idea for Glow Away while on vacation, they told The Huffington Post. In the middle of the night, Russo received a frantic phone call from his sister, who was crying because her young son had been unable to sleep through the night for weeks due to his fear of "monsters under his bed." The phone call reminded Russo of his own childhood fear of the dark. “Every night my Mum had to tuck in my covers tightly under my feet and around my shoulders or I was convinced that some scary monster would come and grab me!” he recalled.

Looking into the issue, Russo and Cramer spoke to a number of psychologists and pediatricians to learn more about why so many children are afraid of the dark. "They taught us that the reason kids are so scared of the dark is because of their incredible imaginations combined with an inability to rationalize their fears," Cramer said. The pair decided to redirect children's vivid imaginations toward a solution. 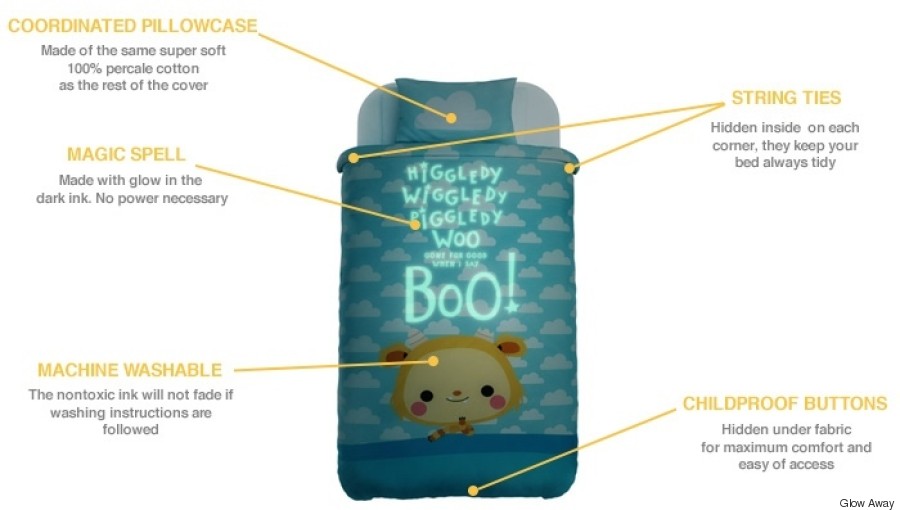 Pairing this idea with their finding that "most children feel the only thing that can protect them at night is their blanket," Russo and Cramer developed their magical duvet. After pitching the product and receiving funding from Virgin Startups, they fleshed out the design and production model, but they've since run out of money and turned to Kickstarter to raise the additional funds they need.

"Our $20k funding goal on Kickstarter will enable us to finance the down payment for our first large volume order so that we can bring Glow Away to the general public and help kids all around the world overcome their fears," the pair explained. To date, they've raised almost $9,000 and are working tirelessly to raise awareness of Glow Away's message about the importance of sleep, especially in children and their parents.

The founders of Glow Away describe the response to the product so far as "humbling." Cramer told The Huffington Post that they received a handwritten letter from a woman whose son slept soundly through the night for the first time in months after he received Glow Away.

"The humbling impact that sales of the product have had on children's and families’ lives has made us confident that our novel approach to problem-solving will eventually help thousands of families around the world," Russo added.

To learn more about Glow Away or donate to the company, visit the Kickstarter campaign page.

What's Stressing Moms Out?
More:
Parentsafraid of the darkWhat's Working