Hiking the Kumano Kodo Trail in Southeastern Japan is no walk in the park.

The Kumano Kodo Trail is actually a network of trails in the remote, mountainous Kii Peninsula, southeast of Osaka and Kyoto. The trails, which were established as Buddhist pilgrimage routes in the 10th Century, connect several sacred sites, collectively designated a UNESCO World Heritage Site.

Physical hardship is key to the spiritual experience of hiking the trail. It only took a few minutes on the trail to grasp what that meant. I figure that these trails were established before the switchback was invented. Instead of walking gradually uphill on a series of gently sloping switchbacks, we were either trudging up or carefully picking our way down long, steep staircases of high, uneven steps. All I could think about as I panted up the trail was that I should have spent more time on the glute machine in the gym. 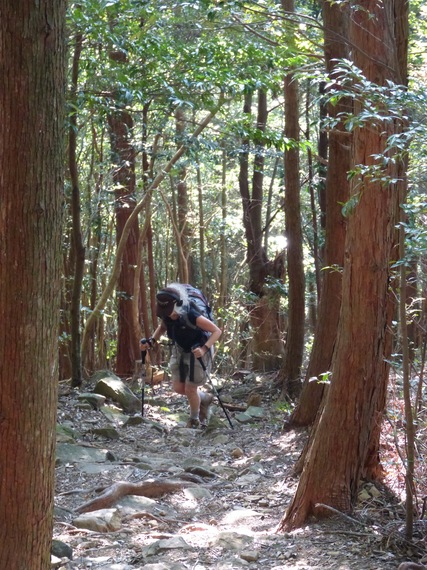 The reward? Silence, serenity and seclusion. We walked through green, sun-dappled tunnels formed by tall ancient cedars, broken up by occasional peek-a-boo views of distant ridges, valleys, and quaint villages. 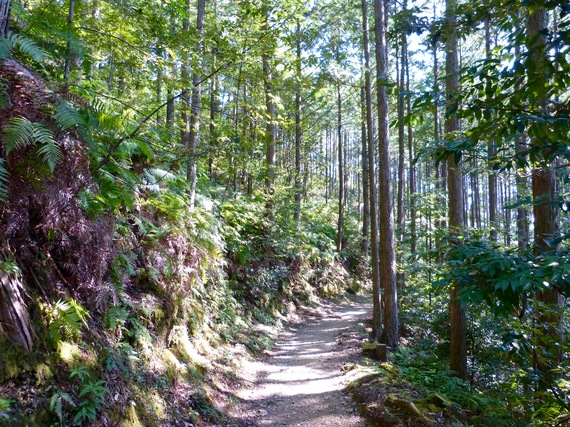 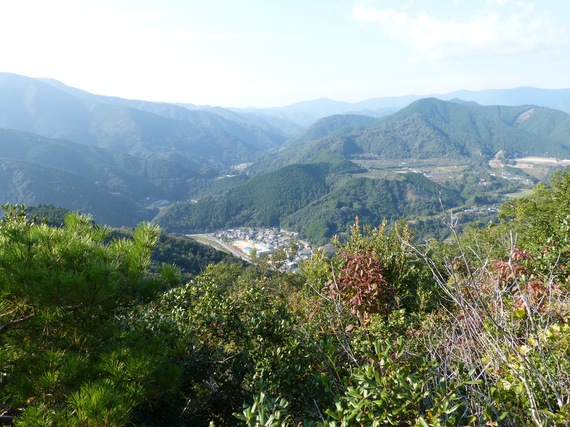 The trail was relatively easy to follow, especially with the detailed trail notes provided by the tour operator that hosted us on this self-guided trip.

At the end of the day we slid into baths at the Japanese-style inns where we stayed each night. The baths soothed my aching muscles and joints and the elaborate dinners served in the inns -- featuring sashimi, pickled vegetables, tofu and God knows what else - replenished my depleted reserves of energy just enough to get my body off the floor each morning (literally - we slept in futons on tatami mat floors most nights) and trudge uphill once again into the mountains.

Our days on the trail were bookended by visits to two of the most important shrines in Japan. Mount Koya is a special place in the spiritual history of Japan. Since the 9th Century when the monk Kobo Daishi founded the first temple on the mountain and established the Shingon sect of Buddhism, devout Japanese have started their religious pilgrimages with visits to Mount Koya. The setting of steep hills covered with majestic cedars added to the spiritual sense of place.

We spent our one night in Koya at the Saizenin Monastery, a complex of simple, serene, and elegant buildings and gardens, an exemplar of Zen design. 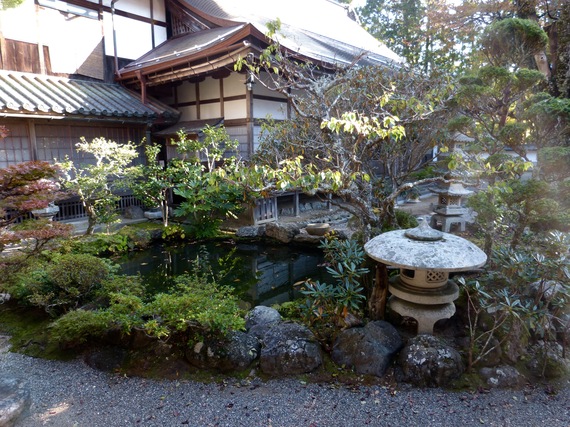 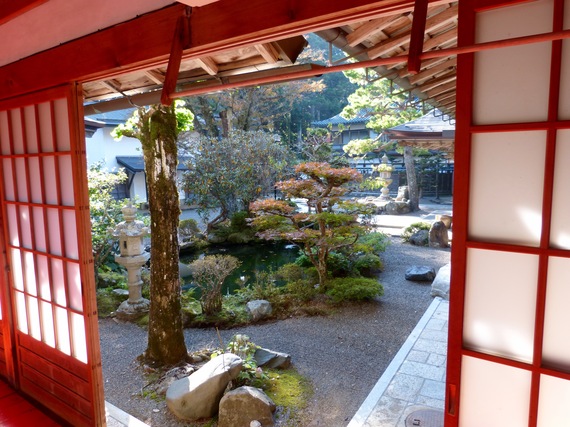 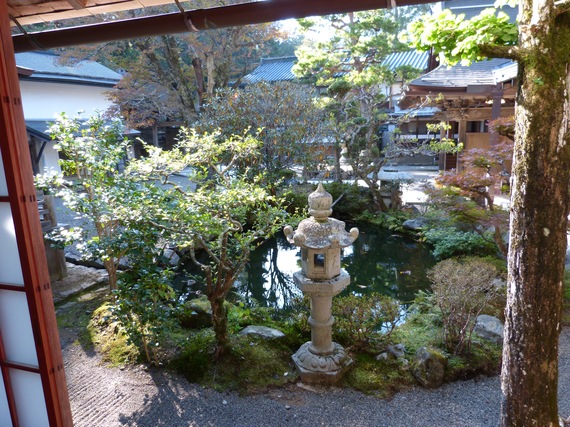 As soon as we arrived at the monastery, I sat back and relaxed....sort of. First, there is no sitting back in a Japanese monastery. The thin cushions on the floor have no back rests making it impossible for me to slouch and lounge, my default position for kicking back and relaxing.

Second, I just didn't know how to act. I am large and loud and can be a bit of a bull in a china shop. And we were the only gaijin in the place. So, behaving in a way that wouldn't attract too much attention was a real challenge for me. The simplest acts, ones I never think about when I'm home, required a Zen-like focus to get right, like using the right slippers and aligning them up properly outside the dining room and shared baths. At some point I figured what the hell and just tried to be as unobstrusive as possible. Since they didn't throw us out, or even glare at us, I guess we did all right. Next time, though, I'll know how to line up the slippers.

The hike ended in Nachi-san, the site of Nachi-Taisha, the most important shrine on the Kumano Kodo trail, and Nachi no Taki, a spectacular waterfall over 400 feet high. For hours we explored the magnificent complex of temples spread up the side of a mountain. We climbed real stairs -- instead of the rocks, roots, and timber steps on the trail - that weaved in and out among the temples. The stairs were pretty steep and long so we got plenty of exercise, but we stopped whenever we wanted to soak up the atmosphere of the place and linger over the views. 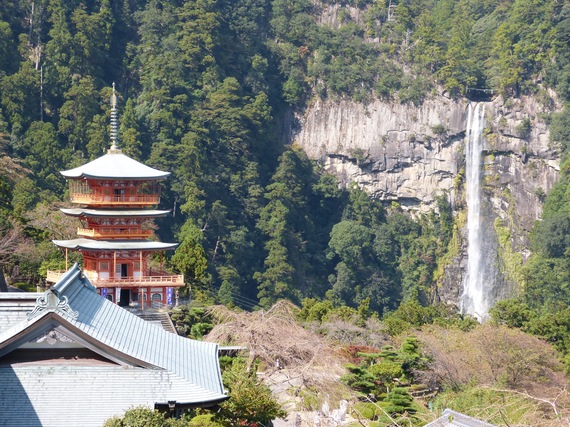 The next morning we took a local bus to the nearby port town of Kii-Katsuura to catch the train to Tokyo (actually two trains, including the legendary "bullet train"). We had time to explore the dock, eat fresh sashimi, and make friends with a bunch of local guys about our age. They understood just a few words of English, and we understood even less Japanese, but we managed to share a few laughs and a large plate of sushi, their treat. 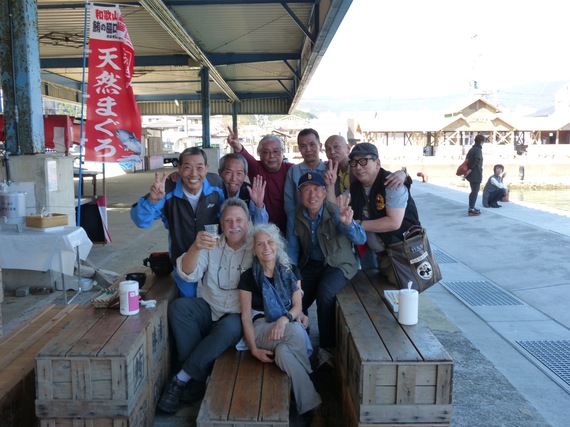 They were typical of the people we met throughout our visit to Japan - friendly, good-natured, helpful and generous - and nothing at all like the reserved, distant stereotypes we expected. We went to Japan for the sites, the history, and the food, but it was ultimately the people that really made the trip.

(For more information and photos, including from Don's stops in Kyoto and Tokyo before and after the Kumano Kodo Trail, see the blog on his website.)