If you've followed the often acrimonious debate over GMOs in foods, you've probably seen pictures of farmers walking through corn and soy fields bedecked in hazardous material suits and respirators. Why do they wear protective gear? According to anti-GMO activists, they are protecting themselves from glyphosate, a chemical often paired with GMOs that they claim is a cancer-causing herbicide.

These people wearing hazmat suits are actually Greenpeace activists ripping up genetically engineered plants in the Philippines in 2011. 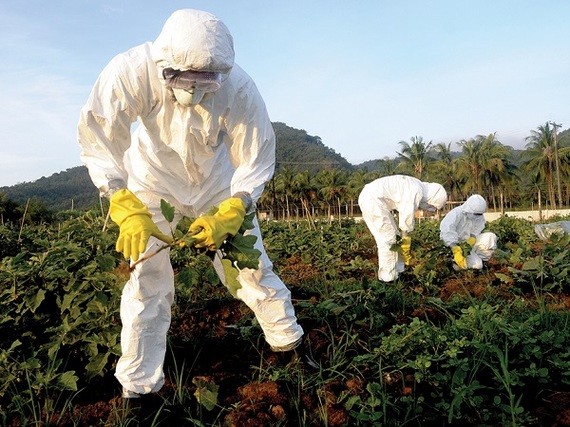 That's ironic in a tragic way as the plants being uprooted are engineered with the natural soil-dwelling bacterium Bacillus thuringiensis (Bt) to protect crops against pests. Farmers who grow Bt use about 95% less insecticides, according to the USDA. Organic farmers use the same Bt pesticide on their crops in a sprayable form.

Here is another of literally hundreds of similar scare pictures on the Internet. Note the accompanying line: "If it's not safe to breathe...is it safe to eat?" 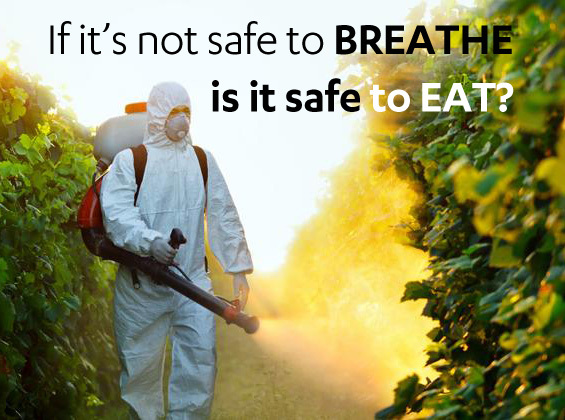 It's a fabricated image and tag; glyphosate has a toxic profile akin to table salt. Farmers use such a diluted form (and such a small amount) of glyphosate on their fields that it does not require the use of protective gear.

Farmers do sometimes use hazmat suits and respirators. Take a look at this picture taken from this video produced in 2011. You can see the farmer decked out in a full protection gear with chemicals spewing from the back of his tractor. Looks pretty ominous, yes? 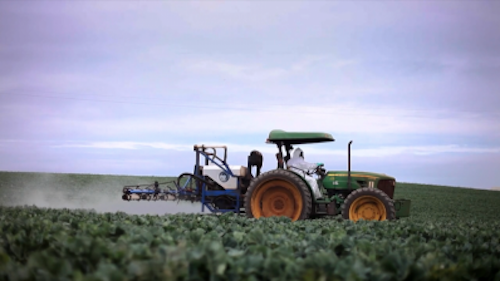 Well, it turns out these are organic cauliflower fields at one of California's largest family-owned California farms, Lakeside Organic Gardens in Watsonville. They know that spraying their fields with some natural chemicals, like the soapy insecticide being used here, can endanger their health--so they protect themselves.

Travesty unfolding in the organic heart of California

Which brings us to the situation unfolding in towns and cities across America, most recently in Petaluma, California. Petaluma is foodie country. It's in uber-liberal Sonoma County, a hotbed of anti-GMO sentiment. In November, Sonoma will vote on a highly contentious initiative that would ban GM crops and seeds. (A similar ban proposal failed in 2005.)

Although the herbicide glyphosate is still legal for use in the Petaluma region, anti-GMO activists have complained about it in public forums with the hope of getting it banned. Anticipating a ban, public officials have begun introducing alternative weed control methods.

"We're not under a moratorium, but we're doing this internally so we can have some data to bring to people to consider," said Ron DeNicola, parks and landscape manager for the city of Petaluma.

Both the city and the area's largest school district have stopped using glyphosate, instead trying out various organic solutions. It's been a disaster so far. The first issue has been price. Glyphosate costs $62 for a 140-gallon mix; the organic products they have tried cost more than a $1000 to cover the same area--a 1700 percent increase. That may be nothing to the residents of one of the richest counties in the United States, but it's enough to bankrupt the weed management budgets in less affluent places if Petaluma's "experiment" should become a model.

But the real threats may be ecological, and to the health and safety of farmers and others who apply the herbicide, according to officials in Petaluma.

The treatments are also said to be extremely pungent during application, with several workers complaining of eye irritation and one experiencing respiratory problems," [Joe] DeCarlo[, the district's director of maintenance,] said. Those attributes have required the use of new protective equipment, something that was not required with Roundup. "It's frustrating being out there using something labeled as organic, but you have to be out there in a bodysuit and a respirator," he said.

For those motivated by science and a balanced view of health and environmental risks and benefits, here's the bottom line: Glyphosate, which is the generic name for Roundup, carries a "caution" label that suggests farmers wear regular clothing that covers their skin. Organic chemical soap concentrates come with a "warning" label: they are often toxic to bees (and other harmless ecologically crucial insects) and "require eyewear, coveralls, and chemical resistant footwear, gloves, headgear and an apron." Prudent farmers, like those at Lakeside Organic, and the workers in Petaluma, wear respirators.

To cap off the unanticipated problems brought on by panic decision-making, the hazardous organic soapy chemicals do not kill the weeds as effectively as glyphosate, Petaluma officials said.

Having used the alternative herbicides over the past two months, DeCarlo said crews have needed to apply the treatments more often to achieve similar results. The plants are also likely to regrow, since the root remains alive underground.

How did anti-GMO campaigners drive Sonoma County, and indeed many other well-meaning cities and regions around the world, into in this bizarre Alice in Wonderland anti-science pickle?

Chemicals scare people. Even worse in many people's minds are pesticides, which are used in growing crops, and which inevitably end up in our food in miniscule amounts. Scientists assure us that the infinitesimally small amounts of food chemical residues that we ingest are harmless, but that doesn't reassure many people who have been caught up in a wave of chemophobia--the irrational fear of all chemicals that dominates mainstream environmentalism. Anti-chemical activism is a huge business, driving the organic and 'natural products' movements, and it's one of the dominant memes in cyberspace. Chemophobia has even trickled into the stories of journalists who are unschooled in risk assessment.

Three years ago, the central mission of anti-biotechnology activists was to convince people that GMOs could cause health problems. Those concerns have largely faded, as one independent global science agency after another--now numbering more than 275--have reviewed thousands of studies and issued public statements affirming that foods grown from genetically modified seeds are as safe or safer than their conventional or organic counterparts. The GMOs-are-safe consensus was underscored in May when the National Academies--the premier independent science organization in the United States--issued a comprehensive review, declaring that no unusual health problems have been linked to GMOs.

As the ability to scare people about the alleged dangers of GMOs has receded, campaigners gradually shifted their focus away from GM foods themselves, instead targeting the synthetic chemicals often paired with them. Their chief bogeyman: glyphosate, which scientists have long established was of milquetoast toxicity, less hazardous than common table salt. [Read Genetic Literacy Project's GMO FAQ backgrounder on glyphosate]

Glyphosate has emerged as the proxy for anti-biotech campaigners to attack GMOs. GMO critics claim glyphosate is linked to autism, cancer, gluten allergies, 'leaky gut' syndrome and other disorders. Concerns about glyphosate's possible health impacts increased in 2015 after the International Agency for Research on Cancer (IARC), a research arm of the World Health Organization, classified glyphosate as "probably carcinogenic," using what is called a hazard evaluation.

But regulatory oversight agencies in the US, Europe and elsewhere reviewed and rejected IARC's cancer designation, noting it was based on the questionable quality of the studies evaluated to make its conclusions and that it focused on whether glyphosate might cause cancer in workers exposed to extreme doses over extended periods of times, not whether traces of it in our food pose a danger.

The US Environmental Protection Agency's Carcinogenicity Peer Review Committee issued a report in October 2015 (stamped 'final," it was posted on the web by the EPA in April 2016, then removed for unexplained reasons) questioning IARC's use of incomplete data, reaffirming its past conclusions that the herbicide is safe as used: "based on the weight-of- evidence, glyphosate is classified as "Not Likely to be Carcinogenic to Humans". The EPA specifically rejected IARC's claims that epidemiological studies raise questions of a likely cancer link.

In what was widely seen as a rebuke of the findings by the WHO sub-agency IARC, a joint panel from the World Health Organization and the Food and Agriculture Organization of the United Nations issued a review of glyphosate in May 2016, concluding it poses no cancer risks as encountered in food and does not impact our genes.

Simply said, the global science consensus remains that glyphosate is a comparatively mild herbicidal toxicant that does not cause cancer or pose serious health threats.

So what happens now? Petaluma and other communities in the US appear poised to ban glyphosate and substitute more hazardous, ineffective and costly alternatives. Nearby Richmond has taken an even more radical approach; after a closely watched, year-long review of herbicide use, the county banned glyphosate outright and now uses completely manual weed removal methods at great cost to taxpayers--and no promise of increased safety. The situation is even worse in Europe, where anti-glyphosate frenzy has frozen the European Commission, which has until June 30th to reauthorize its use or a de facto European-wide ban will go into effect.

Jon Entine, Executive Director of the Genetic Literacy Project, Senior Fellow at the Institute for Food and Agricultural Literacy, University of California-Davis. Follow @JonEntine on Twitter