Genetically modified organisms (GMOs) have been controversial since they were first introduced into the food supply in the mid-'90s. For those who are not aware of what exactly a GMO is, think Frankenstein's monster. Apply the same technique used to create that monster to real-life organisms, and you have GMOs. Companies like Monsanto are doing this to our everyday food. Want a sweeter tomato? They can create it. Want a bigger berry? They can create that as well. 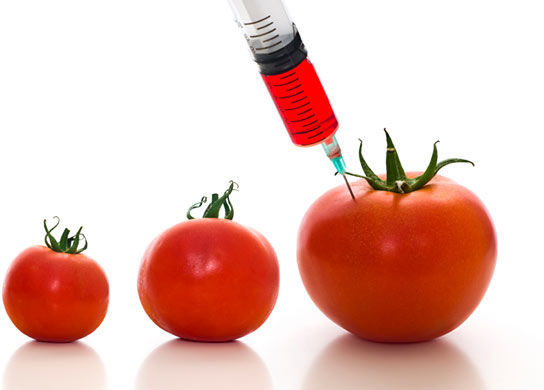 Here is where some of the dilemma lies: As it stands right now, there is no independent safety testing or labeling required of genetically engineered (GE) food and crops, so it is not known exactly how unhealthy and environmentally destructive these products may be. Monsanto, the leader in genetic engineering, believes that GMOs just expand on natural breeding, and that the risks aren't any different from the risks associated with crops that are bred naturally. They say the only difference is the foreign gene (transgene) that is inserted into its protein product. Oh, Monsanto, is that all?

In order for breeding to be "natural," it can only take place between forms of life that are closely related (e.g., dogs with dogs, not dogs with cats, and corn with corn, not corn with tomatoes or fish). In this way, the genes that carry information for all parts of the organism are passed down through the generations in an orderly way. The engineering and manipulating of these genes involves dangers that are completely different from those associated with natural breeding.

With GMOs, tissue from the living organism is processed through what is known as a tissue or cell culture. The genetically modified (GM) gene is inserted into the DNA of millions of the tissue-cultured plant cells. The inserted gene is intended to reprogram the cells' genetic blueprint, creating completely new properties in the cells. This process is carried out either by using a device known as a gene gun, which shoots the GM gene into the plant cells, or by linking the GM gene to a special piece of DNA present in the soil bacterium.

At this point in the process, the genetic engineers have a tissue culture consisting of hundreds of thousands to millions of plant cells. Some have picked up the transgene, while others have not. The next step is to treat the culture with chemicals to eliminate all except those cells that have successfully incorporated the GM gene into their own DNA. Yeah, sounds completely natural.

Finally, the few cells that survive the chemical treatment are treated with plant hormones. The hormones empower these genetically modified cells to mushroom and separate into little GM plants that can than be transferred to soil and developed. Once the GM plants are growing, the genetic engineer examines them and eliminates any that do not seem to be growing well. He or she then does tests on the remaining plants to identify one or more that express the GM genes at high levels. These are selected as candidates for commercialization.

The resulting population of GM plants all carry and express the GM genes of interest. But they have not been assessed for health and environmental safety or nutritional value. Now, let me play the devil's advocate by saying that just because the GM transformation process is artificial does not automatically make it undesirable or dangerous. It is the consequences of the procedure that give cause for concern.

The process by which they culture the genes and associated tissue are uncertain and extremely mutagenic. This can cause unpredictable changes in the proteins, DNA, and biochemical composition of the final result, which can then lead to unexpected nutritional aggravations along with allergenic and toxic effects. This doesn't seem all that natural to me. After all, how can one trust the creator of products like Agent Orange to alter the genes of our food? I am not buying it, and neither should you.

Download
Calling all HuffPost superfans!
Sign up for membership to become a founding member and help shape HuffPost's next chapter
Join HuffPost
Follow Lesley Daunt on Twitter: www.twitter.com/theLesleyDaunt
Voting Made Easy
Register to vote and apply for an absentee ballot today
Register now