One morning recently, you and several other thousand people who use Gmail may have woken up to a message with the subject line: "Tame The Data Explosion," or something else unsolicited. That email was not a promotion from a long-forgotten website or a chain letter from a loopy aunt. It was an ad straight from Google, appearing alongside your legitimate email.

Depending where Google placed you on its rollout schedule, Gmailers have noticed or will soon notice a drastic change in their inboxes. Where once your email came in one big feed, now it's segmented under tabs labeled "Primary," "Social," "Promotions" and other categories.

Google says that it made the change because it "puts you back in control using simple, easy organization." That's true, but there's also a craftier reason behind the update. That "Promotion" tab is the new destination for targeted ads that appear like email, as first discovered by Geek.com.

"Like" is the operative word; the ads technically aren't emails. When you click on one, you're either sent to another website or shown a pop-up ad. It's an important distinction for those worried that Google is handing out email addresses to advertisers (which it isn't doing). That reassurance is still unlikely to stop millions from clicking the ads as if they were email.

"Instead of ads always appearing at the top of your inbox, they’ve been relegated to a more appropriate place in your Promotions category," Google told VentureBeat. In theory, you won't mind ads being emailed to you as long as they appear in a designated place.

How do you purge these "emails" from your inbox? We have your back:

Perhaps you don't mind the extra emails (you're probably in a minority) but want to stop ads from specific companies. The solution is straightforward, if time-consuming: Just click the "X" in each ad to make it go away. Google is better than practically any other company at learning people's behavior and slowly, you'll teach it which ads you find relevant.

If You Want To Get Rid Of All The Ads..

Maybe that's not enough, and you never want to see an ad pretending to be an email. Again, the solution is simple: Click on the gear in the top-right on the main Gmail page and under the menu, click on "Configure inbox." This screen will pop up; just uncheck the box next to "Promotions," and like magic, you'll never see Google spam again. If you want to get rid of Gmail's new tabs altogether, go ahead and uncheck all of the boxes except "Primary." 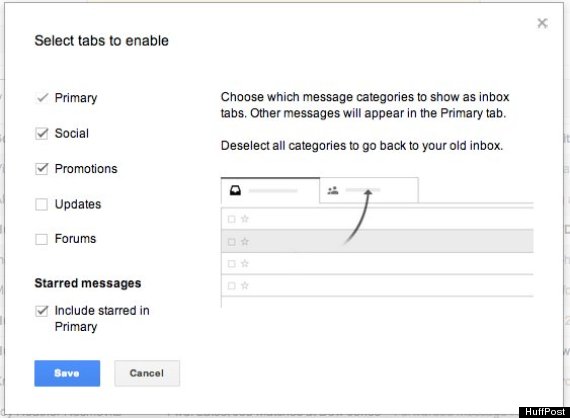 There's a tradeoff, though. Do you notice the difference between the two inboxes below? One has the Promotions tag turned off and the other doesn't. With the Promotions tag visible, that American Express ad goes away. But when the Promotions tag is disabled, there's the ad again. It's a game of Whac-A-Mole: Google will shove an ad in front of your eyeballs, one way or another.

Why Is Google Doing Any Of This?

Google is a for-profit enterprise (and, being worth nearly $300 billion, a quite successful one), so... duh.

Specifically in this case, the amount of money Google makes each time someone clicks on an ad -- so-called average "cost per click" -- has been falling for nearly two years, in part because ads on smaller smartphone screens fetch lower prices, and people are spending more time on mobile devices.

Those little text ads that appear in every Google search and Gmail inbox are the core way Google makes money, so the decline has put pressure on Google to eke as much money out of its desktop ads as possible. So if you're looking for the ultimate culprit behind new Gmail ads, look no further than the phone in your pocket.