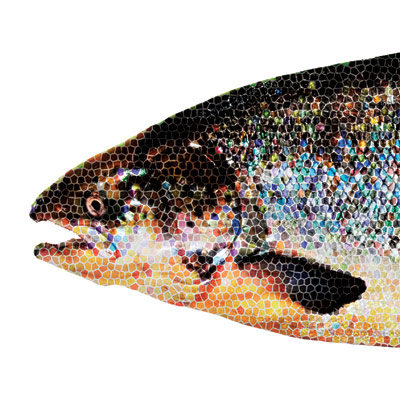 It’s hard not to: 70 percent of our corn farmland and 93 percent of soy farmland are planted with crops genetically engineered to resist pests and herbicides and increase crop yields. And in the next few years new science may provide genetically modified apples that don’t turn brown, rice that helps build up vitamin A, even an “Enviropig” which produces less phosphorus in its manure. Find out more about the latest news on these and more common genetically modified foods including tomatoes, canola and sugar beets.

And as early as 2012, you may be able to buy a GE super salmon that grows to maturity in just two years. As John McQuaid writes in his special report, “The Future of Food,” in the March/April issue of EatingWell Magazine, “As science. this is pretty cool.”

What do you think: Are genetically modified foods good or bad for our planet? Join the discussion here.

The science geek in me is intrigued by these new foods and wants to believe they will improve the world. Theoretically, genetically modified crops will allow us to feed more people more nutritious food, using less land and fewer pesticides or herbicides.

The health freak in me is encouraged by the fact that to date there has been no widely accepted scientific link between genetically modified foods and human health problems.

And the nature lover in me is cautiously optimistic: I’d like to think that genetically modified salmon, farmed in inland pens, might alleviate pressure on depleted wild stocks from both overfishing and the diseases currently being spread by salmon farms.

But that’s assuming all goes right. And that the businesses that own the rights to these projects act responsibly, keeping the health of both humans and environment in mind, and that there’s no harm done to organic farms or traditional fishing practices. Unfortunately, that’s not always the case.

Do You Know How Many Genetically Modified Foods You're Eating? 8 to Pay Attention To

I am all for science and believe the mistakes or misconduct of some companies should not damn or disrupt all research, but they should make us pause and consider the potential long-term impacts. They should make us think more carefully about where our food comes from and how it is produced.

And consumers should have the right to know whether what they are eating has been genetically engineered or modified. At present, there are no laws requiring labeling, but there are three ways to know that your food is not genetically modified:

Buy Organic: The “USDA certified organic” label is a guarantee the food you buy was grown or made without any genetic modification to its ingredients.

Look for the Non-GMO Label: This relatively new label is gaining in popularity (it’s now on more than 900 products, including much of Whole Foods’s 365 Everyday Value brand) and comes with a certification that the product is GMO-free, but not necessarily organic.