Some people just can't wait for scientists to be convinced that genetically modified food is harmful.

Adam Eidinger, a marijuana legalization and food-labeling activist, is one of those, and told HuffPost he has tried to avoid genetically modified food "for a long time."

On a recent Friday evening, a handful of people who share his concerns about melding food and technology gathered at Eidinger's Washington apartment for dinner. But science aside, how's the food? 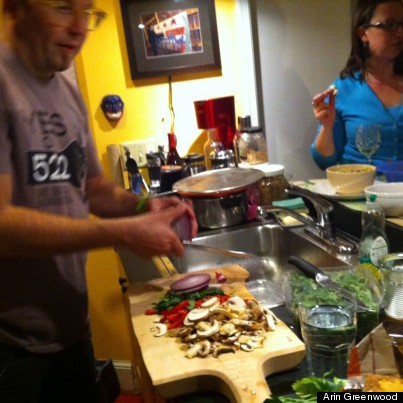 "There is no GMO coconut oil," Eidinger explained.

One dinner guest was enthused about the choice, though not for palate-related reasons. "I put it on my face just to moisturize," said Lauren Stansbury as Eidinger turned off the stove, above which hangs a license plate reading "HEMP DC."

"In Buddhism, you think about where the food comes from," said Sarah Massey, who brought a vegan, GMO-free and quite satisfying guacamole to be scooped up with organic blue corn chips. "It gives you compassion."

"I don't mean to diss God, but the farmer did all the work," said a retired bike messenger named Kevin Keefe, who is working with a group that tries to restrict the growth of genetically modified foods through ballot initiatives.

"And Adam!" said another guest.

"I will bless your food with hemp seeds if you like," Eidinger said, adding a high-protein sprinkling to the plates of spaghetti. 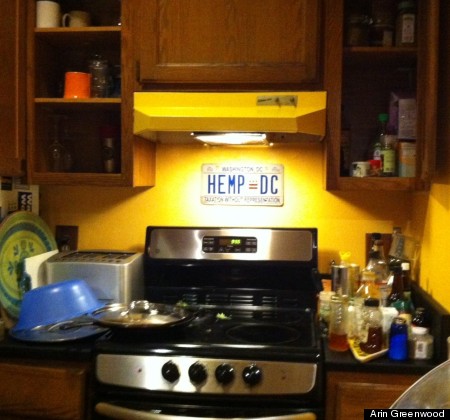 Some in the anti-GMO movement are motivated by what they consider health and environmental risks. Others focus on the idea of mixing the genes of one species with the genes of another, producing something they see as troublingly "unnatural."

Eidinger said he's "not against genetic engineering per se," but chalks up the rise in "chronic intestinal diseases," food allergies and other health problems to the spread of engineered foods.

The biotech company Monsanto, which produces GMOs and is most closely associated with them, also takes a lot of heat. Eidinger bought stock in Monsanto for the purpose of introducing a shareholder resolution that would require the company's board to work with the Food and Drug Administration on food-labeling guidelines.

"Transparency. I think once we have labeling, the demand for the products will dry up," he said. He may be right -- but there are those in the scientific community who think labeling GMOs would, in the words of one Scientific American editorial, "endanger people's health" by giving in to "misinformation and hysteria."

Eidinger said that as the political battle continues, all food labeled organic must be free of genetically modified organisms, under current FDA standards.

"Organic chickens are not fed GMOs. They could be fed grains. That's not an ideal diet. The ideal diet is bugs," he said, while various guests agreed it was generally hard to live up to the standards for ideal food.

"I like to think that about three-fourth of my food comes from" a local organic farm, said Massey. "When I go out it's a different story. And I go out a lot."

"I try to buy my leather used," said another guest. "I just bought chaps and I got them used."

"How about wine? You got wine?" asked Jazmine Rumbaut. Wine is not specifically labeled as being GMO-free, but is not made with genetically modified grapes. At least not yet.

For dessert, the guests ate chunks of organic chocolate (rich and pleasantly bitter) and dipped into a bowl of organic jelly beans that may have been just a touch too sweet. They puzzled through various food scenarios to see which would be more or less acceptable. (Lab-grown meat? Unacceptable, said Stansbury, who was also bearish about parents being able to control the genders or features of their future babies.)

Next to the jelly beans was a bag of a not-yet-legal substance relating to Eidinger's other advocacy work. Is that organic, too?

"I don't know," said Eidinger. "It's from the black market."