The tropical paradise of Hawaii is on the bucket list of many. Peaceful images of white sandy beaches, warm tropical waters and the welcoming spirit of Aloha is what draws tourists from around the globe. In 2012, Hawaiian tourism hit an all-time high. Visitors spent a record of $14.3 billion dollars and more tourists than ever before (close to 8 million people) visited the Hawaiian Islands last year.

Simultaneously, the vibrant ecosystems and biodiversity of the Hawaiian Islands are under serious attack by the unrestrained growth of the biotech industry. The average tourist coming to Hawaii to enjoy a vacation, get married or possibly invest in a time share isn't aware of the chemical contamination taking place due to unregulated GMO experiments and heavy pesticide use on the islands.

My intention with this article is to raise awareness and help shine a light on the environmental crisis that is happening right now, under our noses, in Hawaii. If action isn't taken quickly and soon, I am fearful of what the long term, unrestrained use of pesticides will do to the ecology of Hawaii. What the general public needs to know, is that GMO research in Hawaii requires the use of powerful restricted use pesticides.

A little over a month ago I was shocked to learn from a friend that Kauai and the rest of the Hawaiian Islands have become Ground Zero for open air testing of experimental pesticides and GMOs. After hearing this information I made my first visit to Kauai and researched what was happening on the island, and learned about the grassroots movement fighting back to stop the chemical trespass and assault on the environment.

This video, Molokai Mom, tells the story of one mother taking on Monsanto after her young son got sick from breathing in pesticide drift allegedly from Monsanto's fields near her home.

How did this happen? How the GMO industry snuck onto Kauai... and the rest of Hawaii

In the mid-1990s, the sugarcane industry collapsed and vacated much of the agricultural land on Kauai. That agricultural land is now either owned by the State of Hawaii or several private landholders. All of which lease the land out to the biotech industry. Specifically, the Big Six; Monsanto, Dow, Syngenta, BASF, Pioneer and Bayer.

What is taking place generally in GMO testing activities is research that involves the transferring of DNA from one species to another. This may include human genes introduced to crops such as corn, soy, rice and sugarcane and genetically engineered crops for use in the pharmaceutical industry. The end result is an organism (plant or animal) that would never occur in nature. For the farmers on Kauai that practice organic and sustainable agricultural practices, their crops are at risk for contamination. For the ecosystem(s) of the Hawaiian Islands, biodiversity is being threatened. For the people that live and work in the communities close to the GMO fields; their health and the health of their children is at risk from long term pesticide exposure.

The Garden Island of Kauai

On the west side of Kauai, in the town of Waimea, GMO test fields border on several communities and a school. In this small town, Atrazine has been detected in the water. Astonishingly, pesticide spraying is done without any buffer zones to public areas, schools or waterways. The spraying of undisclosed pesticides, often in combination with each other, can be done early in the morning, late afternoon or sometimes in the middle of the night. This practice of combining toxic pesticides, a process known as "Stacking," carries an enormous risk since the impact on the environment and human health is completely untested and unknown. Individually, some of the confirmed pesticides used; Atrazine, 2,4-D (a derivative of Agent Orange) Lorsban and Chlorpyrifos have proven to have serious impacts on health and the environment. One can only imagine the toxic pesticide cocktail that is created by this practice of "pesticide stacking" and other experiments.

Records obtained from the State of Hawaii Department of Agriculture indicate that 22 different restricted use pesticides, totaling 3.5 tons, have been imported onto Kauai by five commercial agriculture entities and constitute approximately 99% of the restricted use pesticides utilized by agricultural operations on Kauai. The chemical companies on the Island of Kauai have refused to disclose this information to the public or to the co-sponsor of the pesticide ordinance mentioned later in this article, Kauai County Councilmember, Gary Hooser.

In my four years of serving on Marin County's Integrated Pest Management (IPM) Commission, I have become familiar with reviewing lists of pesticides for approval and participating in open, public discussions about potential risks to people and the environment. I have grown accustomed to transparency with respect to pesticide use by my local government. It has been an honor to be part of a county wide citizen committee that passed an IPM Ordinance that incorporated pesticide buffer zones around schools and playgrounds, and listened to the demands of the public with respect to public disclosure about what pesticides are allowed to be used by the county. All in the interest of protecting public health, wildlife and the environment. (I do need to state that my comments in this blog post reflect my own as a private citizen, and are not meant to represent Marin County's IPM Commission in any way.)

After researching and learning about the GMO issue on Kauai, I am still trying to wrap my head around the fact that these companies can get away with nondisclosure and clandestine use of pesticides.

How on earth is this possible?

One day I took a drive to what I was told is one of most beautiful beaches in the state, Polihale State Park, on the western tip of Kauai. As I drove a little over 4 miles down a remote dirt road, past the Pacific Missile Range Facility, I came upon several GMO test fields. All of the fields had "No Trespassing Notices" like the one below. I never ventured onto private property, and took my photos from the road. The smaller signs (well out of my reach) within the fields contain information for the workers about recent spraying 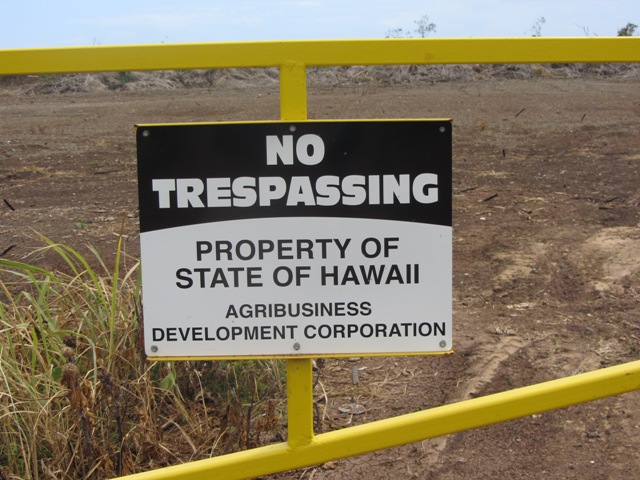 Driving slowly down the bumpy, red dirt road I couldn't help but notice the polarities around me. I stopped my car to get out and stand in awe of an ancient mountain range on the oldest island in Hawaii. I took in the majestic, sovereign hills that provided the backdrop to a valley that contains field after field of experimental GMO crops. 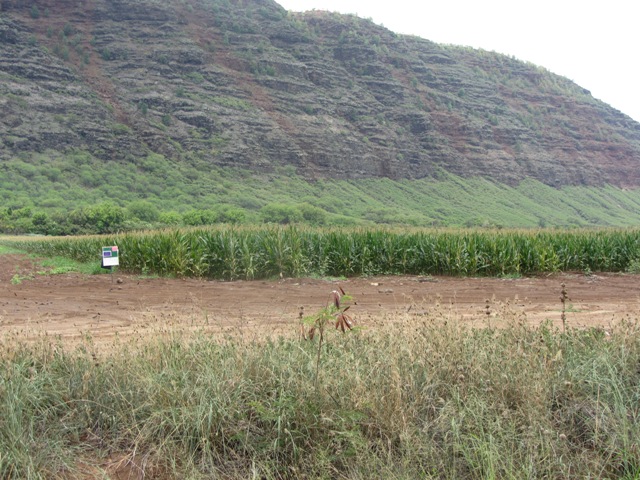 I thought about the surrounding land, air, and the ocean just a short distance away. I then thought about these fields being saturated with experimental pesticides, and my heart broke wide open.

On the west side of Kauai, people are getting sick, and two separate lawsuits have been filed by residents of the town of Waimea. One lawsuit that represents 150 people alleges that Pioneer, in its cultivation practices, has allowed pesticides and pesticide laden dust to escape and infiltrate into people's homes for the last 10 years.

The spraying of pesticides by Syngenta near Waimea Canyon Middle school has been suspected in causing children and teachers to become sick on several occasions between 2006 and 2008. In one incident at least 10 children collapsed and were sent to the hospital. An investigation was launched to find out why. Syngenta has denied that their spraying of pesticides was the culprit. Instead they claim that the plant "Stinkweed" was to blame for people becoming sick, not their GMO fields or use of pesticides that borders right up to the school. In speaking with some of the locals in Waimea, no one recalls stinkweed ever being an issue in the community.

In February 2012, between Waimea and Hanapepe on Kauai, a local dive company discovered a massive, sudden die off of heart sea urchins. It was estimated that approximately 52,000 sea urchins were dead on the ocean floor along the south side of island. Considering that the GMO fields are in abundance along the west and southwestern shores of Kauai, it is reasonable to look at GMO and pesticide run off as one possibility for the sudden die-off. An investigation was conducted by the State Department of Land and Natural Resources and USGS. However, testing the sea urchins for exposure to pesticides or GMOs was never done, and the results of the investigation were inconclusive for the sudden die-off.

An Ordinance is Introduced

On June 26 of this year, Kauai County Council Members Gary Hooser and Tim Bynum introduced Draft Bill 2491 If passed, this bill would give the County of Kauai the authority to regulate the commercial use of pesticides and GMOs. At the first public reading of this pesticide ordinance, it was estimated that 1000 people were in attendance. As I watched some of the public comments on a live streaming feed, I was aghast to listen to some of the testimony from Syngenta and Pioneer, when pressed by members of Kauai County Council to disclose what pesticides are being used, or for copies of experimental pesticide use permits issued by the EPA. To say these companies were dancing around the issue would be an understatement.

After reading the proposed ordinance it feels like an attempt at sanity. This ordinance requires that each of the GMO companies discloses what pesticides are being applied, and asks for public notifications from the companies. It requires that when spraying pesticides, buffer zones around schools, hospitals and other public places be put in place. It also calls for a temporary moratorium on the experimental use and commercial production of GMOs until the county has conducted an Environmental Impact Statement (EIS) on the health and environmental impact of the GMO industry. This is a necessary step in the right direction, and public comments are being accepted now by Kauai County Council.

What You Can Do for Kauai

If you are concerned about the alleged poisoning of paradise please share this article on social media sites, with the tourism industry and anyone you know that loves Hawaii and the spirit of Aloha. The world needs to know that Hawaii is ground zero for open air pesticide and GMO experiments.

On July 31, 2013 there will be a second public hearing on this issue, and possibly a vote. The Pesticide Action Network has been following this issue closely and has created the following website, Stop Poisoning Paradise.

You can also learn more by visiting Hawaii Seed.
Mahalo!