I've written a new book on human genetic modification and designer babies. This is my second book as the first one was Stem Cells: An Insider's Guide, which is currently the top stem cell book on Amazon. 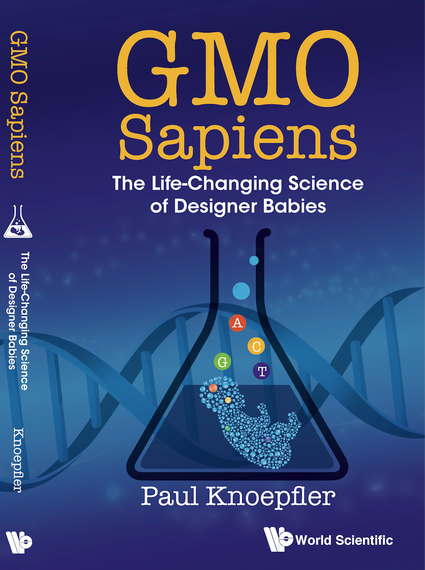 The new book is called GMO Sapiens: The Life-Changing Science of Designer Babies.

You can get a copy here at Amazon or over here at my publisher's site. The cover is shown at right.

The title was chosen as a portmanteau (or mashup) of GMO and Homo sapiens.

Why write a book on human genetic modification?

Unlike in past decades, today the possibility of heritable human genetic modification is very real. Based on all that we now know it is reasonable to predict that someone will attempt to create genetically modified people including designer babies in coming years. The results could be great or disastrous, but in either case (or probably more likely some mixture of the two) the outcomes are going to be revolutionary.

Are we ready for what may come next?

How will this affect individuals and society as a whole?

More thinking, discussion, and transparency are urgently needed. The goal of this book is to move in a constructive direction by educating and stimulating debate as well as dialogue.

At the same time in the book, I am not afraid to tackle the real, but tough issues that are integral to this topic. For instance, it seems that up until now in science it has been somewhat taboo to talk about the possibility of designer babies. However, we don't have time to close our eyes to the reasonable probability that someone will try to make designer babies in the near future nor to pretend that nothing could go wrong for individuals or society.

Some influential scientists and thinkers such as George Church and Steven Pinker are publicly expressing enthusiasm for the idea of making people who would be GMOs. I have proposed my own plan for how we should carefully chart a path forward, but others want to step on the gas full speed ahead on human modification.

Already just last year we saw the creation of the first genetically-modified human embryos in the lab using the amazing gene editing toolbox that is CRISPR. That is just one step, but may have opened the door to much more.

The US National Academy of Sciences has held two meetings on human genetic modification in just the last couple months and in the UK, a regulatory body just gave a researcher there approval to make genetically modified human embryos using a new powerful technology called CRISPR.

It addition to being a resource for learning, my new book is written to be an enjoyable read that is approachable to both an educated lay audience and scientists alike.

You also might find my recent TED talk on CRISPR and designer babies to be of interest.