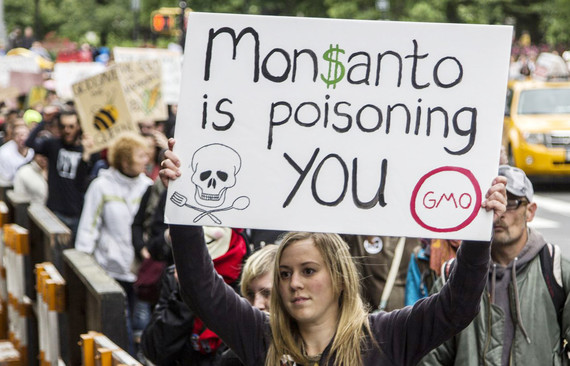 Organic, Local, and Responsible Agriculture are all words that have been passed around the food industry in recent years. One word that is less understood by the masses, but is beginning to hit the agricultural mainstream is GMO (genetically modified organism). Little is known of the long term effects of GMOs, but it is an issue circulating far pasts its agricultural roots, and into mainstream media through the campaigns of politicians like Bernie Sanders and the creative processes of entertainers like Gwyneth Paltrow, Neil Young, and Astronauts of Antiquity.

With the recent surge of GMO and anti-GMO arguments within the media, it is important to understand the background of GMOs and their most famous association, Monsanto.

Although in theory, the idea appears practical, when these genetically engineered crops are harvested, they contain high levels of glyphosate, which is then consumed by humans or fed to animals. 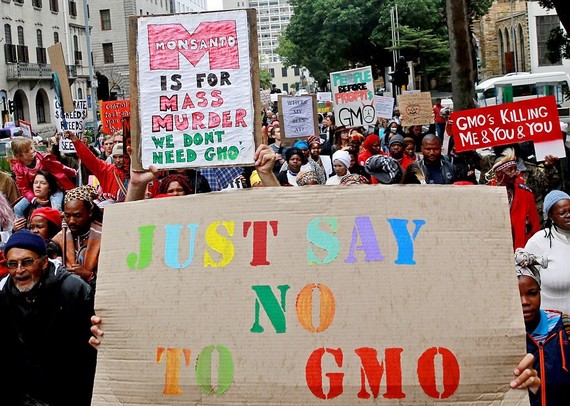 Photographed by Caleb T. Maupin in NYC at the March Against Monsanto, May 21, 2016

While the company is based out of the United States, Monsanto's effects have reached a global scale. Monsanto's global expansion has expanded the issue of GMOs to Africa, Asia, the Middle East, Europe, and South America. Monsanto states that by doing so it is "focused on empowering farmers" by "delivering products that support farmers all around the world."

However, in response to Monsanto and Monsanto's global expansion, numerous anti-GMO groups have rallied together to end Monsanto's use of genetic modification in the food and pharmaceutical industry.

Resulting from the arguments against GMO, Monsanto has experienced significant declines in business. Monsanto's core business is at risk of collapsing due to changing trends in the technical and scientific markets, and the company is becoming vulnerable to a takeover by German competitor, Bayer.
While many are relieved to see this negative downfall of Monsanto, a takeover merely shifts the issue from one company to another. As a result, the core fight for many anti-GMO groups is eliminating GMOs, starting with regulations to label GMO products.

One of the anti-GMO groups dedicated to eliminating GMOs is March Against Monsanto. March Against Monsanto's mission is to unite activists around the world to support the global fight for agriculture to be free of GMOs. March Against Monsanto advocates for the cause by promoting the purchasing of organic food and boycotting Monsanto owned companies. In addition, the group rallies for the labeling of GMO products, in order to give consumers the ability to make informed decisions about what they choose to consume. 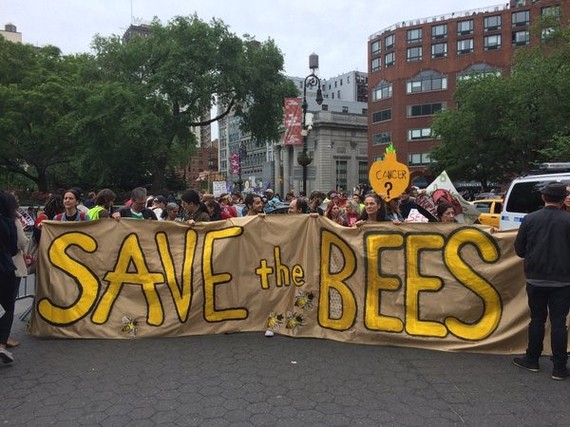 In response to Monsanto's GMO activities, March Against Monsanto's main peaceful protest of GMOs in the global agricultural industry is an annual march, held in multiple cities globally. This year's march was scheduled for May 21, and taking place in 382 different cities across 6 continents.

One of the largest attended marches is the group's New York City march held in Union Square Park, Manhattan. This year, March Against Monsanto has invested in large-scale advertising campaigns to coincide with the yearly march. The group has revealed an anti-GMO add on a billboard in Times Square to help spread the message alongside marchers in Union Square Park.

Initiatives such as March Against Monsanto's annual march are crucial to fight against GMOs as these events unite supporters in a global setting against a greater cause.

The global rally against Monsanto has expanded past the agricultural industry, making its way to the mass through the entertainment industry. Artists such as Gwyneth Paltrow, Neil Young, and Astronauts of Antiquity having expressed both their support against Monsanto, working this support into their creative processes.

Paltrow has publicly expressed her backing off the anti-GMO campaign. The Academy Award winning actress has joined the congressional fight to start labeling GMO products and promotes GMO free on her lifestyle blog GOOP.

Neil Young's latest release was, titled The Monsanto Years; an album dedicated against GMOs and corporations. In a recently released documentary by Neil Young, Young explores the struggles of farmers fighting against Monsanto, expanding past his music catalog to bring light to the corruption of Monsanto.

Similarly, LA original band with roots in NYC, Astronauts of Antiquity's latest single Paradise was written in support of the major anti-Monsanto group March Against Monsanto. The Paradise single and accompanying music video feature themes of understanding the effects of GMO chemicals in food and pharmaceuticals. Astronauts of Antiquity, in full support of promoting anti-GMO and organic living, both walked the March Against Monsanto and released Paradise on May 21.

Being discussed in books, politics, and entertainment, GMO and the accompanying role of Monsanto is no longer an issue solely attributed to the agricultural industry. As awareness and understanding spread of the possible dangers of GMOs and Monsanto, influencers from many industries are using their crafts to speak out against Monsanto's role in GMO chemicals in food and pharmaceuticals.