Teen movie connoisseurs had a pretty good time of it in the spring of 1999: "Cruel Intentions," "10 Things I Hate About You," "Never Been Kissed" and "Go" were all out in theaters that April, and each would become a future staple of the genre.

Released on April 9, 1999, it's Doug Liman's "Go" that stands out most: not a traditional teen movie, but still a portrait of youth culture, the comedy was a genre-bender that told same story from three different vantage points. On Christmas eve, Ronna, a young grocery store clerk (Sarah Polley), tries to make make her January rent by scoring some ecstasy for two soap-opera stars (Jay Mohr and Scott Wolf). Things go awry, as they so often do when drugs are involved, and everyone from a small-time dealer (Timothy Olyphant) to Ronna's chaste friend (Katie Holmes) to a quartet of bros (among them, Taye Diggs and Breckin Meyer) get involved. There are car chases, shootouts, a threesome and even a reference to "The Breakfast Club." The dialogue crackles, with Holmes and Olyphant, in particular, given some great monologues.

"You know what I like about Christmas? The surprises," Holmes' Claire says to Olyphant's Gaines at the beginning of the film (but the end of the story). "You get this box and you're sure of what's inside. You shake it, weigh it. You're convinced you have it pegged. No doubt in your mind. But then you open it and it's different. You know. Wow! Bang! Surprise! I mean, it's kind of like you and me here, you know? I'm not saying it's anything it's not. Come on, this time yesterday, who would've thunk it?"

John August, for one. The screenwriter was in his 20s when he wrote what would become "Go," basing the story on the employees who worked at his local Ralph's supermarket and stories he had heard from friends.

"It's fundamentally a story about what it's like to be 20 years old. A bunch of wild stuff happens, but then at the end of the day, you pick yourself up, dust yourself off and go back to work," August told HuffPost Entertainment during a recent interview. "It's very much of the age. All the things that happened in there, they aren't things that happened to me, but they are carefully curated stories of things that happened to friends of mine. I don't know any hit men in real life, but I know all these people in this movie."

To celebrate the film's 15th anniversary, HuffPost Entertainment spoke to August about some of the key events that went into the making of "Go." 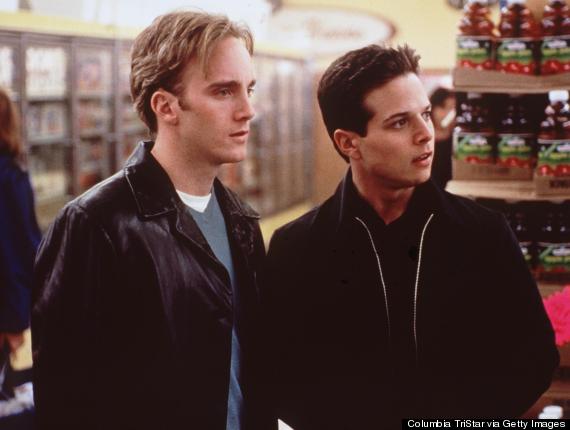 What do you remember about writing "Go"?The first section of "Go," the section with Ronna, I wrote that as a short film. It had all the same characters -- even Adam and Zack [the soap stars] were all there. I wrote the short film and my friend was going to direct it, but they never got around to directing it. It sat there. My friends would read the short and they would say, "You should do a whole movie version." I held off doing it for a long time, because I knew if I tried to wedge more stuff in there, it would just all fall apart. It relies on the tension of that moment. Then I thought I could restart the movie from that moment. Fortunately, "Pulp Fiction" had come out, and it had worked. Suddenly, it didn't seem like an impossible thing. I could do that, because there was an example of a whole movie doing that. That was how I was able to restart the timeline twice in the same night.

You were a producer on "Go," what went into the casting process?Sarah Polley was one of the few people who was just a flat-out offer. She was in Canada and the only way we could get her was to offer her the role. For everyone else, they just came in. People would come in for certain roles and then we'd move them around. Timothy Olyphant came in to read for Adam or Zack. He did it, and then we were like, "You're not really an Adam or Zack," and he was like, "No, no, I'm totally a Gaines." He had already prepared Gaines and was amazing as Gaines.

Katie Holmes had shot the pilot for "Dawson's Creek," but it hadn't aired yet. She came in and she auditioned and she was just great. She was sort of my placeholder in the film. She's the voice of reason and fantastic at it.

Melissa McCarthy came in and auditioned, and she was incredible. She nailed that one tiny little part, which completely served as a lynchpin to the Adam and Zack storyline. I loved her so much. I bumped into her at Starbucks while we were editing and said, "You probably don't remember me, but I wrote 'Go' and I wrote a short film for you and we're going to make a bunch of stuff together.' She said 'Yes!' We've been friends for 15 years now.

"Go" had a reported $5.5 million budget in 1999, a number that now seems unheard of for a smaller movie with few stars.We were a strange movie, because we were an indie film, and then right before we started filming, Columbia bought us out. We were in pre-production and about to start shooting and our foreign financing fell out because we didn't have a bankable white male star. At that point, though, we had a cast that was already really exciting. Katie Holmes wasn't a star, but everyone thought she might become a star. Scott Wolf was a star. People were excited about Sarah Polley. We had a really electric young cast, and Columbia -- God bless them -- came in and said, "Sure. Let's make this movie." They gave us the bank, but still treated us like an indie film, which was the best situation for it. If you stopped and actually tried to make this a bigger film or a more conventional film, it would have fallen apart.

What was the production like? What's funny about the movie is that the final product looks great. You remember all the great things about it. The actual process of making it was horrible. That's a crucial lesson here. It's one thing to write a script that takes place entirely at night. When you go to shoot a movie that takes place entirely at night, it's awful. We were outside in the dark from 8 p.m. until 8 a.m. for 25 days. You just become this weird nocturnal creature. It was cold, you were tried and cranky, you don't have nearly enough money or time.

What do you remember about seeing the movie for the first time?The first cut of the movie, I remember watching it and feeling like it was so bad that it would hugely hurt my career. The lesson was that the first cut of every movie is awful. When I saw the first cut, the only section that was really working was Vegas, and the "Magic Carpet Ride" sequence. That worked great. The start wasn't working at all. It was really hard to get the movie started and figure out that you were on these different plots and introduce the characters. Some of it was just the nature of the cut. The experiment of how we'll get from place to place. It didn't work and bringing it back to the script was important. We had to show the early cut to the studio. The studio said, "Okay, the Vegas thing doesn't work at all, so maybe we can cut all of it." Which is impossible to think of now. It wasn't until we had a cut that we were happy with that we could show to an audience and get a remarkable response that everyone took a deep breath and realized there was a good movie there. Whether it was going to be a giant movie or a good little tiny movie remains to be seen, but at least we're happy with the movie.

One of the most enduring parts of "Go" is its final line, uttered by Nathan Bexton's Manny, who had just nearly overdosed on ecstasy and spent a night sleeping behind a dumpster: "So, what are we doing for New Year's?" When did you come up with that kicker?That was part of reshoots, if I remember correctly. Partly because we had so many challenges of filming at night. The night we were shooting that last scene, a lot of things went wrong. Actors got hurt, we lost our location, it started raining. Then you look at the whole movie and making sure that you're getting the right point: no one learned a lesson. It was not the night that everything changed. So often movies about young people are all about the theme of "we went through all this stuff and now we're different." No, that's not really true. Here's a kid who almost died, and he's like, "Okay, what's next?"