Conventional relationship wisdom says couples should settle their disagreements before bed and never go to sleep still mad at each other. And while this advice is well-intentioned, in some cases, it can actually worsen the problem at hand.

We asked relationship experts to tell us the types of arguments that call for hitting the hay and revisiting the discussion at a later time. Below, seven times to sleep on it, according to therapists and psychologists:

“Lack of sleep can greatly exacerbate conflict. When couples are exhausted, they are more irritable and snippy. Going to bed mad can often mean that you wake up feeling okay, especially if the conflict was exacerbated or even entirely caused by two irritable, fatigued people sniping at one another.

Also, the idea that going to bed angry is ‘bad’ leads to many couples staying up later than they should, trying to resolve fights and often failing, as they get more and more entrenched in their positions. When you have a good night’s sleep, you can much more easily see your partner’s position and empathize, which means that making up is finally possible.” ― Samantha Rodman, psychologist and dating coach

2. When you’ve been drinking.

“The heated conversations of the overserved can travel to strange places, and the more drunk, the less constructive they tend to be. It might be best to call a time out, have a glass of water, and revisit the squabble in the morning, if you still remember it.” ― Ryan Howes, psychologist

3. When you’re really worked up.

“When in conflict, the body often goes into fight-or-flight mode. ‘Fight’ usually results in an elevated heart rate, an increase in stress hormones and an inability to think rationally. You cannot have a meaningful conversation, much less attempt problem solving, when your body is in this state. If you recognize it, you need to find a way to self-soothe. Some people go for a walk, some take a shower, some meditate and some sleep. If your anger has gotten the best of you, sleep may in fact be your best strategy for repair, especially if it’s late.” ― Zach Brittle, therapist and founder of the online couples therapy series forBetter

4. When you need more time to process your feelings.

“We are not in a good place to hash things out when we are angry and triggered and need time to process what’s happening. Anger provides useful information to us and is a signal that something needs to change. Specifically, you want to do this in a constructive way (journaling, reflecting, physical activity, sleep) and not destructively (lengthy discussions, yelling, violence). It is up to you to determine what you need, and not your partner’s job to predict this after simply telling them you’re upset. Sleep also provides a mental filing of things experienced or learned throughout the day, so it’s an even better time to allow for processing of these strong emotions.” ― Kari Carroll, couples therapist

5. When the conflict requires a mediator.

“Some conflicts are ongoing and require intervention, like therapy. Trying to resolve these in one evening just so you don’t go to sleep angry would be impossible, and would leave both partners feeling hopeless and like they must be doing something wrong if they can’t resolve things.” ― Samantha Rodman

6. When you have a big day the next day.

“You may have a bone to pick, but it’s 11 p.m. and your partner has a job interview first thing in the morning. Or a final exam. Or major surgery. If it’s possible to hold onto your moderate grudge until their major event has passed, that may be the most loving, considerate thing to do. But once their event is over, do talk about it, because buried resentments wreak havoc over time.” ― Ryan Howes

7. When you’ve lost sight of what you were even arguing about in the first place.

“Most arguments are about nothing at all. How many times have you said, ‘I can’t even remember what we were fighting about?’ That’s because we are usually arguing about how we are arguing. It’s safe to say that people are rarely in their best brains after 10 p.m. And there are usually a handful of complicating factors, whether alcohol, or work stress, or the fact that all you want to do is finish watching your TV show. It really is OK ― in fact, sometimes it’s better ― to go to bed angry. Picking your battles is an art form. See if you remember what you were angry about in the morning.” ― Zach Brittle 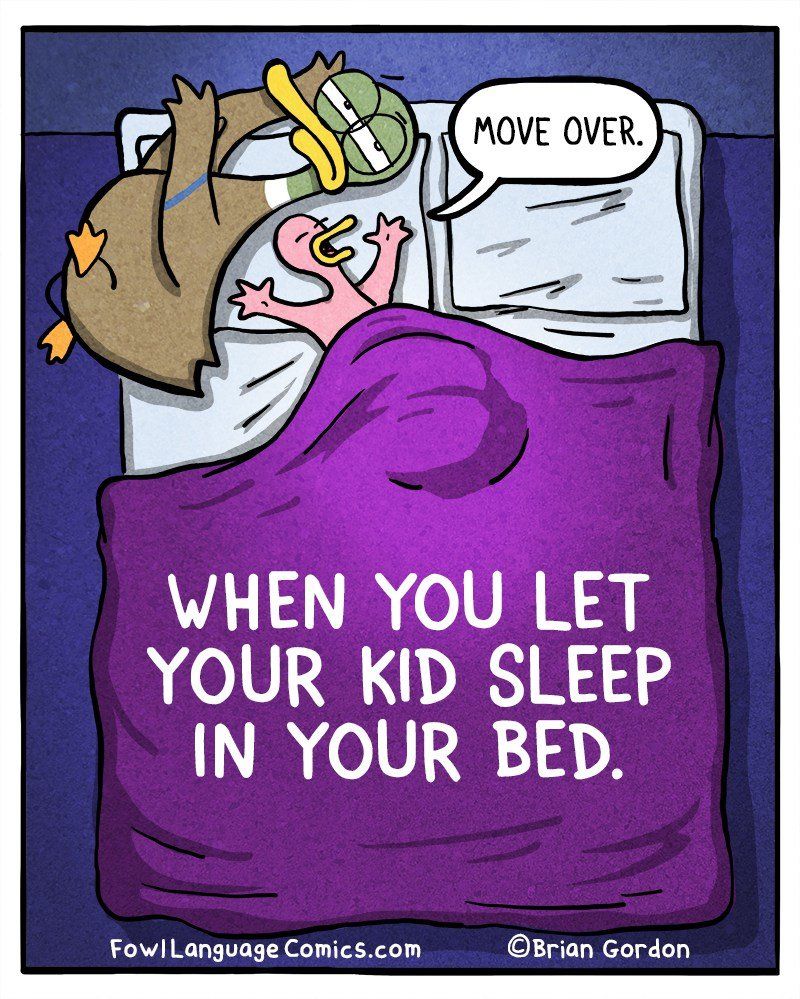 Comics That Sum Up Bedtime For Parents
More:
Arts and EntertainmentpsychologySleephealthcarealternative medicine