This election is coming down to the wire. Pundits are predicting a tightening race with Donald Trump now having a better than one-in-three shot at becoming the next president of the United States.

Plainly stated, this election is a choice between freedom and fascism. And I do not use those words lightly. 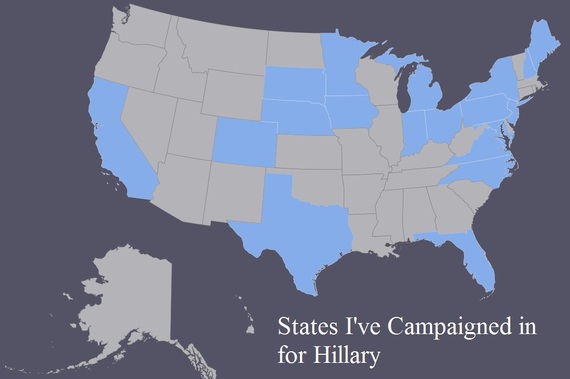 Donald Trump -- from the first day of his campaign to this day -- has sought to turn us against one another. He preys on economic fears and old hates. Tells us ethnic and religious minority groups are trying to steal our greatness. Questions the legitimacy of our elections. Encourages his supporters to resort to violence. Promises to jail his opponent if he wins. Fans the coals of a militant white nationalism. Promises to use our military to torture and commit other war crimes in our name. Encourages Russian cyber thieves to break into the Democratic National Committee's email system.

As president, Hillary Clinton will work to address climate change, to pass comprehensive immigration reform, to reform our criminal justice system, to protect LGBT rights, to make college affordable for all. She will work to build an economy that works for all of us again.

As president, Donald Trump would lock up millions of our neighbors in for-profit immigrant internment camps, and issue religious ID cards to our Muslim American neighbors. He would make income inequality worse with tax cuts for the super-wealthy at the expense of our children's stronger country. He would make a complex world more dangerous and more unstable.

That is why I am working to elect Hillary Clinton - the only responsible choice. And that is why I've gone all in to help elect her as our next president. Before Election Day, I will have spoken at more than 80 events in 19 states and the District of Columbia. I have keynoted Democratic Party dinners in seven states. And in between campaign stops for Hillary and Democrats up and down the ballot, I have, so far, called into 26 radio shows and appeared on 17 cable TV segments -- eight of which were on Fox News. (That's true commitment!)

If you agree that we must repudiate the hate-filled candidacy of Donald Trump and keep him far away from the White House, then I hope you will join me these last few days in going all out for Hillary Clinton.

If you live in Maryland or another state that already heavily favors Secretary Clinton, take a day trip (or more!) to the nearest battleground state to knock on the doors of your fellow Americans. If you can't travel, join your neighbors at a local Democratic office to make calls on behalf of the campaign to swing states. Most importantly, make sure that each and every one of your friends and family members votes.

It's now or never. The next four years will determine the next forty. Make each day count.

"The country we carry in our hearts is waiting."