This morning while I was getting my daughter ready for preschool we watched one of her favorite television shows, Go Diego Go! I was happy to see that the show had decided to bring up the issue of how animals are threatened by oil spills. But I also thought it was odd how the show made cleaning up a spill seem so easy. Is this the right message to send kids? 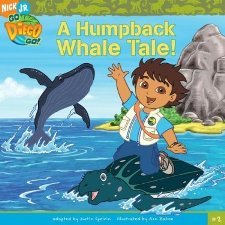 For those readers who are unfamiliar with the show, Diego is an "animal rescuer" who travels throughout the world helping "animals in trouble." He often receives help during his adventures from his sister Alicia, his parents, friends, animals and also his well-known cousin, Dora the Explorer.

In the episode we watched this morning, a bottlenose dolphin and a baby humpback whale team up with Diego. The climax of the episode occurs when the dolphin and humpback whale are trapped along with several other animals in a small area of the ocean as an oil spill rapidly surrounds them. They are saved when Diego's sister Alicia arrives in a boat and then sucks up the oil with a vacuum-like device.

Being the environmental nerd that I am, I was immediately curious when this episode of the show was made. I also pondered whether or not the implied message that you could clean up oil spills with vacuum cleaners was a good one to send to kids.

According to Wikipedia, this episode of Go Diego Go! is titled "Ocean Animal Rescuer" and originally aired on April 22 of this year, only 2 days after the BP oil spill began. This information suggests that the episode had to have been made before the spill. But what spectacular timing, eh?

Next, I decided to see what I could find on the internet about talking to your kids about the oil spill. The best resources I have found so far are the National Wildlife Federation's Ranger Rick question and answer page for kids and an article from Politics Daily that stresses that "children need the straight story."

Ranger Rick is direct in telling kids about the oil spill and its implications for wildlife. I felt relieved to know that you actually can use vacuum-like devices to clean up oil too, using a technique known as skimming. Ranger Rick describes skimming as such: "Boats suck up, or skim, the oil from the water surface and put it into tanks. This works only in calm waters. Plus, using dispersants can make it hard to skim oil."

So it seems that despite my initial doubts, Go Diego Go! has done its job well. If you are interested in watching "Ocean Animal Rescuer," you can check Nick Jr. for scheduled broadcast times.

If you like Levi's articles you can read more at