As Olympic fever has captured our attention and beautifully distracted us from the woes of winter, I got to thinking about what these super athletes eat to stay in shape and store up energy. You may be thinking about carbs like pasta, but there is something better. And as much as I love pasta, I know that whole wheat grains are better for athletes and for us, too.

Right now, whole grains are enjoying a comeback in cereals, breads and even sweets. According to the Whole Grains Council there are 19 whole grains, some better known than others. Of those nineteen, I have five favorites that are readily available in supermarkets and health food stores: brown rice, oats, farro, quinoa (keen-wa) and barley. Adding some or all of these to your diet will be an investment in your overall health.

Whole-wheat grains add fiber, protein, magnesium, iron, copper, phosphorus and other vital nutrients. Some, like oats, have been shown in studies to lower blood pressure and cholesterol levels. You can achieve that from a daily bowl of oatmeal. Brown rice with its outer layer of bran intact instead of being removed and "polished" (like white rice), retains all of its nutritional value and can easily replace white rice in your favorite recipes.

Farro and quinoa are the newest fashionista grains on the culinary scene, but they have been around since ancient times. Farro is a grain commonly grown in Italy and parts of the Middle East, and it's a wild cousin of wheat. It is a protein packed wheat berry. It has a nutty flavor and a chewy texture.

Quinoa is a recently re-discovered ancient grain that is a cousin to leafy greens like spinach and Swiss chard. It is native to South America and was once called, "the gold of the Incas". Quinoa is a complete protein because it includes all nine essential amino acids. It is also low in gluten.

Barley is another ancient cereal grain that resembles wheat berries. It is available as pearl barley, and it is one of the richest sources of insoluble and soluble fiber. Insoluble fiber is necessary for proper elimination of waste products in the body. Soluble fiber binds with fatty substances in the body and eliminates them.

So, go for the grains! They are the Olympians of wholesome, healthful foods. 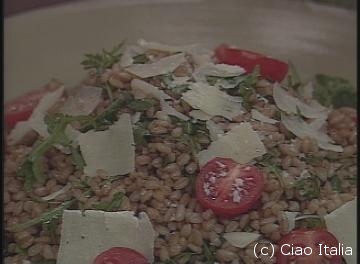 The fast way to cook farro is to cover it with water the night before you plan to cook it; next day drain off the water and put the farro in a 1-quart saucepan. Just cover it with fresh water and cook until it is tender but not mushy. This will take about 15 minutes. Drain and transfer to a bowl.

Pour the olive oil over the farro and mix it well to coat the grains. Stir in the salt and vinegar. Divide the farro among 4 salad plates. Sprinkle the arugola evenly among the plates. Place 4 tomato halves on each plate and sprinkle with the cheese.

Pass more olive oil at the table to drizzle on top.