There will be a lot of boobs protesting in front of the White House on Aug. 26.

It's not what the protesters will be saying that makes them boobs; it's what they will be showing, to say: We're here. We're topless. Get used to it.

Women who want the federal government to advance the rights of women to go topless anywhere that men can -- at a beach, pool, gym, yoga class -- will bare their breasts and celebrate "Go Topless Day," an annual event that takes place the last Sunday in August in cities all over the U.S. and the world.

To celebrate, women -- and the men who support that noble cause -- come together to protest what Nadine Gary, president of the organization behind Go Topless Day, believes is a hypocritical violation of civil rights.

"People say women shouldn't go topless, that it's indecent," Gary told The Huffington Post. "But indecency is not mentioned in the Constitution. Also, it was once considered indecent for women to vote, but that changed."

Go Topless Day is one of the many events organized by a group of UFO believers called the Raelians. They believe that humans were created by advanced scientists known as the Elohim, and that men shouldn't be allowed to go topless without letting women do the same.

Earlier this summer, the group created a furor with "Swastika Rehabilitation Day," which was designed to remove the Nazi stigma from the ancient symbol.

Currently, Go Topless Day protests are scheduled in 30 cities around the world, including 12 in U.S. cities, from Los Angeles to Miami to New York. 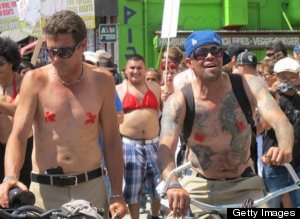 However, the most important may be the ones scheduled in front of the White House and in Tampa, Fla., one day before the GOP convention begins, in hopes of pointing out the hypocrisy to President Barack Obama and presumptive Republican presidential candidate Mitt Romney.

"It should be legal to be topless," Gary said. "In many states it is, but then there are local ordinances that prohibit it. It's very confusing.

"In some cases, women who've had double mastectomies and have no breasts or nipples are prohibited from running with their shirt off."

To make sure the hypocrisy is front and center, Gary said men who attend the rallies will be asked to don red bikini tops.

Being topless isn't just about freedom, it's about health, according to Donna Newman, who is also a Go Topless Day organizer.

"When a woman takes her top off in public, there's a chemical reaction in her brain that is very powerful," Newman told the River Front Times. "It's something men will never understand. We want it written into the Constitution that women should be allowed to go shirt-free in public. We were human beings before we were gendered."

The organization, GoTopless.org, is also trying to get 25,000 signatures on an online petition to the White House by Sept. 13.

"If we get that many, the White House will have to comment on the issue," Gary said.

The American Association of Nude Recreation is lending its support to Go Topless Day, pointing out that men were protesting the right to go topless back in 1935, and only won the right to go shirtless in Atlantic City in 1937.

"It took brave men many summers protesting shirtless to get laws and attitudes changed," AANR spokeswoman Mary Jane Kolassa told The Huffington Post. "Fast forward to 2012, and many, including the American Association for Nude Recreation, now believe it's women's time to win that same right! That indeed women should be able to be shirtless anywhere a man can."

It remains to be seen whether toplessness will replace gay marriage as the civil rights issue of the day, but Norm Pattis, a civil rights attorney based in New Jersey, is skeptical.