Goats will be making a delicious, but temporary, home in D.C.'s historic Congressional Cemetery, which is already host to a private dog park, a spooky book club and other quirky features -- at least for a historic cemetery; the graveyard was founded in 1807 -- like an unusually spirited FAQ page on its website:

Q. Do you have to be a Member of Congress (or any other requirement) to be buried there? 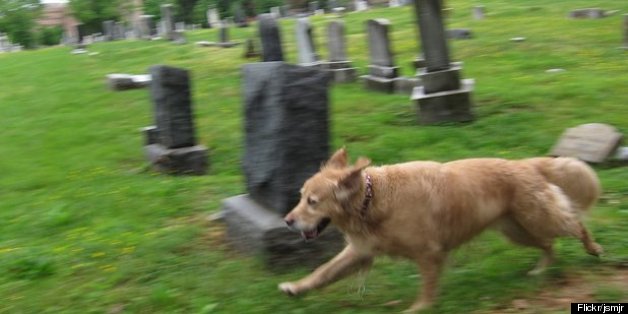 Flickr photo by jsmjr, used under a Creative Commons license.

The goats won't be mere visitors. They'll be on the job (though we'd guess ununionized), working 24 hours a day for about a week to eat away "vines, poison ivy, ground cover and even fallen debris all the while fertilizing the ground," according to a media release:

The revolutionary use of eco-goats eliminates the need for harmful herbicides and prevents the invasive and often foreign species from killing large mature trees in the cemetery's wooded area, which can fall onto the grounds as a result and damage invaluable historic headstones. 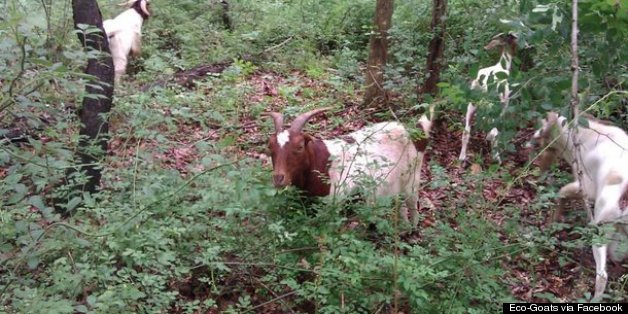 Goats at work on a different job.

The goats were scheduled to begin at the cemetery on Wednesday morning, supplied by Eco-Goats, a Maryland company. But, like so much in Washington, they were reportedly facing delay, according to a story posted to Politico Tuesday early afternoon.

“The [D.C.] Department of Health said ‘OK, you have to have a certificate of health on the herd’ and we’ve been doing this for five years and we’ve never had anybody ask for one so I didn’t have one in my possession,” Brian Knox, the supervising forester of Eco-Goats, told the publication. “So we’re scrambling around trying to get that, require[s] the vet to come out to the farm, make a visit, determine that yes, the animals are healthy, and write the paperwork.”

Later on Tuesday, Knox told The Huffington Post that the goats -- around 60 of them, he said, to clear a little more than an acre and a half -- will, despite the regulatory wrinkles, be at the cemetery as expected, certified and ready to eat.

"We work on goat time," Knox said, which can make schedules a little unpredictable. "Usually it's not bureaucracy that's holding us up. It's the goats."

Check out the Washington City Paper's photos to see just how cute these environmentally friendly greenery-munchers really are (spoiler: they are really cute).

Enjoy this video of baby goats doing a great job of being adorable: