KINGDOM OF HEAVEN, ETERNITY -- At his daily press briefing, Larry "God" Schumway addressed the fact that Senator Ted Cruz has dropped out of the 2016 presidential race. Reporters were curious how someone who was told directly by God himself to run could wind-up not only without the nomination, but dropping out well before the convention in Cleveland this summer. 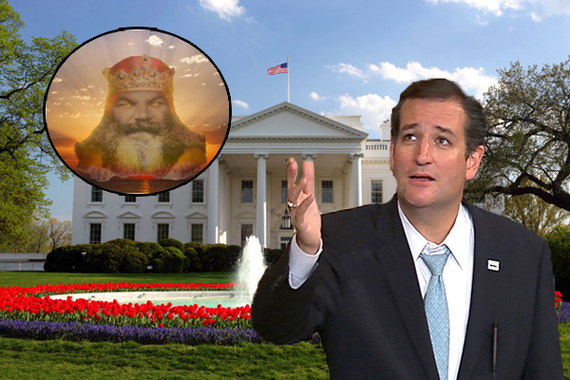 The heavenly press asked God if he really did tell Senator Cruz to run, as the Texas Republican claimed early on in the primary process. Mr. Schumway explained that he did in fact tell Heidi Cruz, wife of Ted, that he should run, but that it was "at the end of a very late night filled with a lot of heavenly sacramental wine," and that he was "fighting back the giggles the whole time."

"I was crank calling the silly fuck," God told reporters of his directive to Cruz to run, "And this crazy demagogue thinks I was serious? It was just a practical joke."

God said that initially his prank was only supposed to last a couple weeks. He said that in his mind no one would really take a guy like Cruz -- who Schumway described as "a loose bag of farts with mean talking points" -- seriously and vote for him for a powerful office such as the presidency. But when Donald Trump entered the race, God says he couldn't resist watching the two "titans of inanity duke it out."

"Why would I want someone who claims to be a Christian, but is the most judgmental man in the race, to be president?" God told reporters when asked if he was worried that a man who proclaims his Christian faith so strongly has been rejected by voters so badly. He insisted that his "son literally died for everyone's sins" only so that "everyone would stop being so judgmental of each other," and Cruz clearly does not understand what "that whole 'we've all sinned and fall short of the glory of me' thing" is about.

Before turning the press conference away from American politics to more important affairs, God made sure to reiterate his position on Cruz.

"Anyway, no, I never wanted Cruz to be president," God said, "I was fucking with him."

Only John Kasich remains as Trump's sole challenge to the Republican nomination. When asked for comment on the GOP in general, God laughed a hearty, heavenly laugh.

"What you're seeing there right now," God explained, "is what happens when you pretend that you don't have to play in the same reality others do, create your very own special news network, and hide, skew and obfuscate the truth from your audience for almost 20 years, and all the while you pump them full of distrust for everyone. They turn on you. The party of Lincoln is now the party of stinkin'. And it couldn't have happened to a more deserving bunch of pricks."

Republished from The Political Garbage Chute.