As many celebrate the Christmas season and the coming of a New Year, maybe there's a way we can, indeed, bring atheists and theists and the disparate factions and religions together on our little planet. And, instead of focusing on the old definitions of "God", that many reject, or on how differently we see and honor "God" across the many religions, maybe there is even a way to use this once divisive term to bring us all together. I think it may be with this image, right here. 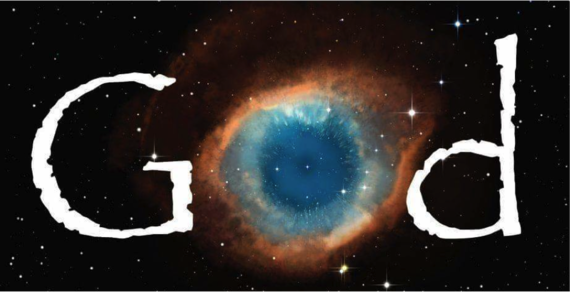 This is The Helix Nebula. It is also called "The Eye of God". As beautiful as it is, it is equally fascinating. It is a vast expanse of gases from an exploded star, 700 light years away in the constellation Aquarius. And it is enormous! It's radius, the distance from the center to the outer boundary, is 2.87 light years which is more than 16 Trillion miles. More importantly, though, "The Eye of God", like other nebulae, actually creates life. Yes, this, these massive aggregations of gases, create life... as well as stars and planets and virtually everything else in the physical Universe. These nebulae are the nurseries of galaxies and solar systems and also contain the elements for plants and animals and humans to develop and thrive. In other words, the atoms and molecules in our bones and heart and skin and brain... and everything around us... are created inside of these astronomical phenomena. So, in a way of speaking, nebulae continue the work of what many regard as "The Almighty" in creating, and re-creating the Universe. One way of thinking about this is that God created the physical universe 13.8 billion years ago with a flash of light called "The Big Bang." Since the stars that God created generally only live 10 million - 10 billion years, the entire universe as we know it would have gone dark and died about four billion years ago... except for this AMAZING universal recycling system. And what an extraordinary recycling system it is! As the biggest stars in the universe run out of their nuclear fuel they actually explode -- a sort of secondary (or tertiary, etc.) "Big Bang" and spew their guts billions of miles into the cosmos. Over the next thousands and millions of years the elements from the insides of these exploded stars come together and form new elements and, eventually, form new stars and new planets. So, God lives, and continues to create -- endlessly -- through nebulae. Here are some other spectacularly beautiful ones. 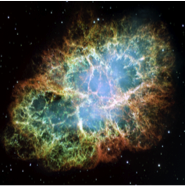 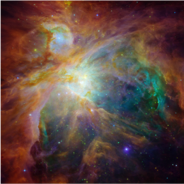 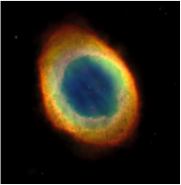 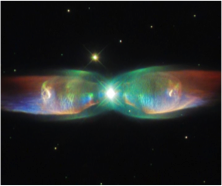 Now that we are done with the science, how about utilizing these magnificent things that brought us together, literally and physically, to bring us together in other ways? What if we added this scientific understanding to how we depict the "Creator"? What if we evolved and updated our definition of "GOD" by bowing to science (which if there is a "GOD", he, she or it would have most certainly also created) and depicting "GOD" in a way that we now know is related to the actual, proven physical creation of stars, planets our own bodies and the universe itself? Some of our ancestors had similar thoughts. They understood that God was too big a concept to try to squeeze into one word and so they put in a dash or an underscore between the G and the D, or left the "O" out entirely. That partially or completely empty space would communicate the unfathomability, the ineffability, the infinite nature of the Almighty.

And that is a beautiful and respectful way to honor God and I considered doing so in my recent book, E=MC2 and The New Definition of God. (http://www.TheNewDefinitionofGod.com

But then I focused on this extraordinary image of The Helix Nebula. In lieu of the "O" I thought there might be an even more artistic AND scientific way to communicate the vastness of God and the Universe, and this 20th and 21st Century understanding about his process of creation and re-creation.

So, starting this Christmas season and with this New Year, I suggest that we begin to write the word in a new way... with a magnificent nebula as an integral part, like the image above.

This image, this way of writing this extraordinarily important and complex three letter word, applies to all of us. Christians, Muslims, Jews, Buddhists, Hindus, Baha'is, all indigenous religions and every other religion on the planet. Every single one of us, no matter our religion or belief in or about God was created by a nebula. Every single atom in our body comes from one. Nebulae bring together the many hot, excited, diverse elements of exploded stars and cosmic dust. Perhaps its imagery can bring its seven billion diverse creations here on Earth together as well.

So, it feels accurate, not to mention beautiful, whether you believe in some sort of Supreme Being, or not, to honor these mini-"Creators" that we can now actually see by putting them front and center in a new, scientific depiction of the word we use to denote "The" Creator as we try, as Albert Einstein said in his extraordinary "My Credo" in 1932, "to attempt humbly to grasp with (our) minds a mere image of the lofty structure of all that there is."

(A fuller exploration of Einstein and a possible scientific definition of "God" can be found in the just released eBook, E=MC2 and The New Definition of God http://www.TheNewDefinitionofGod.com

Communication Strategist, Author of "Words That Shook The World"