Pittsburgh-based comedian Davon Magwood has caught the attention of professional haters Westboro Baptist Church, who say that they will picket his Aug. 10 performance at the Club Café in Pittsburgh.

Magwood, a straight ally and self-professed "fan" of the LGBTQ community, loathes the WBC for their treatment of his friends, so when an opportunity to poke fun at them arose, he didn't miss a beat:

I was watching TV and I saw that there was another freaking tornado hitting the midwest area. So I tweeted -- I posted it because, well the humor for me was the irony of the tweet. The WBC loves to blame natural disasters on the gays and I wondered how they would like it if someone turned the tables on them... Clearly they didn't enjoy it.

I bet if you burned down the westboro baptist church the tornados in the midwest would stop... I just have a feeling they will.

@GodH8sTheWorld LOL. Pittsburgh is the city of Evil Wraths, have you been in #Pittsburgh when the Steelers aren't in the playoffs.

After some back and forth, they decided to accept Magwood's invitation to his Aug. 10 performance, only as picketers rather than as his guests.

Magwood's friends at Pittsburgh-based Commonwealth Press picked up on the challenge and created a T-shirt with the phrase "God Loves Jags," which are now for sale: 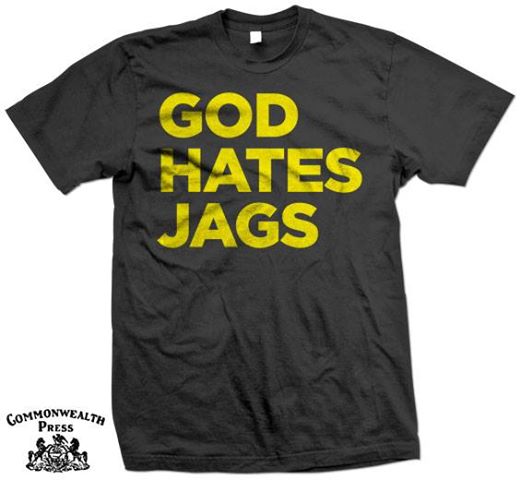 "Jags" is shorthand for the Pittsburghese term "jagoff" which, loosely interpreted, means "jerk." John Chamberlin, founder of Ya Jagoff, a website devoted to calling out jagoffs, explains why this is an ultimate putdown:

The word Jagoff can be used in a few different ways.

1) Expressing appreciation to someone, with a smile on your face and a hug, you say, "Ya Jagoff!"

2) Expressing being startled, half chuckling you say, "You scared the CRAP outta me, Ya Jagoff!"

3) And then there's the version, that's posted on our blog every day... venting about someone that has been a jerk, with a scowl on your face, "Ya Jagoff!"

I love the notion of reversing the WBC's own language on them in a parody combined with the Pittsburghese flavor, "God H8s Jags!" What "church" says that God hates anything, Ya Jagoffs?

There's something poetic about Pittsburgh folks using such a "down-home" slur to stand up to bigots. Frequently mistaken for a sexual reference, the term most likely originated with settlers from Northern England, who introduced the term "jaggerbush." "Jag" or "jagoff" quickly devolved into a way to describe an annoyance. In 2012, the Pittsburgh Post-Gazette banned the word from its print and Web editions. In response, Pittsburgh City Paper editor Chris Potter shared, "For a long time I thought that, like a lot of things Pittsburgh, it had a nice way of flattening pretension."

So why did Magwood take a well-placed shot at the WBC?

As a comedian it's kind of our thing to make light of evil things. But what the WBC does is pretty sickening. To not only abuse their right of free speech, but to spread hate and to capitalize off someones pain is lower than low.

The WBC is no stranger to Pittsburgh. In 2003, they sent emissaries to picket the memorial service for Mr. Rogers of Mr. Rogers' Neighborhood. The LGBTQ community responded by creating a human chain of more than 150 people walking between the protestors and the mourners, carryings signs and singing softly. I was at the counter-protest, and my most vivid memory is of a WBC child, maybe 4 years old, staring with wonder at the large images of characters from the "Neighborhood of Make Believe" on the signs we carried. I felt such sadness for her for the fact that she is not able to experience the joy and love of Mr. Rogers.

WBC also threatened to picket the funeral of three fallen City of Pittsburgh police officers who were killed in 2009 while responding to a domestic call, as well as protest the funerals of local members of the military. In most cases, WBC never showed up.

I think it is a very home grown Pittsburgh way to raise awareness and combat the hate the Westboro Baptist Church spreads.

If the shirts are popular, Commonwealth Press owner Dan Rugh plans to donate a portion of the future proceeds to the Gay & Lesbian Community Center of Pittsburgh, an organization whose work resonates with Magwood. For over 30 years, the GLCC has been serving LGBTQ youth, elders and families with everything from after=school programming to OUTrageous Bingo. Magwood explains:

Actually marching band was the first place where I felt like I belonged in high school and I hung out with a lot of LGBTQ teens then, and it was really cool because they were accepting and fun and regular people really. I hate that this country keeps trying to define people based off who they love. I was bullied a ton as a kid. So making light of stuff helped because making jokes can be an outlet. It is for me. But if you come at hate and mean people with a light heart they can't really get to you, because they feed off negativity.

In his performances, Magwood includes a bit spoofing the "no homo" phenomenon, and he plans to work with the GLCC youth programs.

When asked how he'll respond if WBC does actually picket the Aug. 10 performance, Magwood says he has thought that through:

Well I was hoping to perform my hour and film it. But the show, will be me telling jokes and telling stories. I will probably make fun of them on stage, but people paying to see the show don't really care about [them.] But I will confront them. I think it's been my dream to let them know about themselves and do it in a way were i'm not cussing and yelling at them.

You can learn more about Davon Magwood's comedy at his website, or follow him on Twitter @DavonMagwood to see what happens next. For more information on the "God Hates Jags" T-shirt, visit the Commonwealth Press.