Perhaps it's osmosis, but Ric Viers has noticed that his son seems to have his dad's ear. In the middle of The Hobbit: The Battle of the Five Armies, there is a Foley mistake--a sword that didn't clash to the ground. "And I saw it and I just kind of smiled, but before I could even say anything, my kid leans over and says, 'Dad, they forgot one of the sound effects.'"

After years of on-the-job training, sound effects expert Viers has learned valuable lessons for not just audio but life, not the least includes keeping one's car keys in the refrigerator. 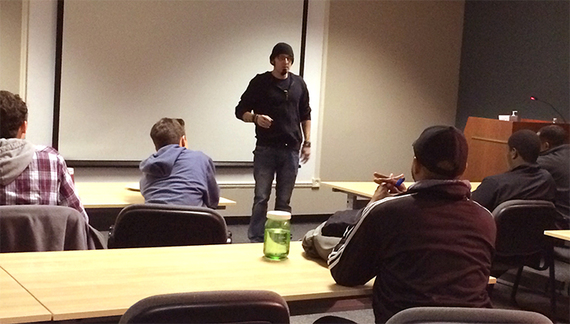 Ric Viers presents to Detroit-area young filmmakers as part of a Digital Arts Film and Television workshop at the Motion Picture Institute in Troy, Michigan in November 2014.

Owner of the world's largest collection of sound effects, The Detroit Chop Shop, Ric Viers was a guest speaker in November for Detroit area student filmmakers. The author of the best-selling books The Sound Effects Bible (2008) and The Location Sound Bible (2012), he shared his war-stories and provided tips included in his easy-to-read and valuable guides for all levels of Spielbergs -- on little or no budget. 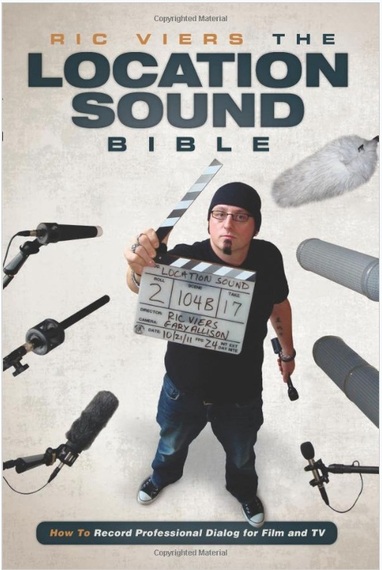 If You're Noticed, You Did Something Wrong...

"It truly is a thankless job...If someone says to you, 'Man, you did a great job on the sound,' that usually means you went over the top," Viers explains. Like the lighting guys and an efficient butler in Downton Abbey, the sound department's role is to make itself natural and invisible--as if we all have microphones traveling just over our heads at all times. But in reality, as anyone trying to hold a conversation with someone walking into the kitchen, life doesn't really work that way. "It's when they notice the sound that you perhaps did something wrong." 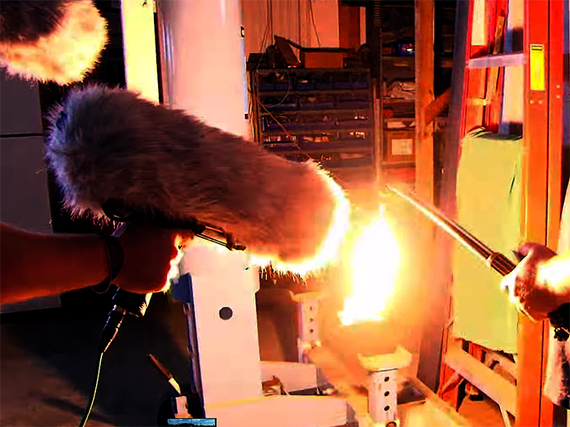 Viers shared his 10 Commandments for location sound recording, with Cold War-like tactics of hiding microphones in plants, dashboards, and Pepsi cans. But the expert who loves making mistakes and figuring out how to avoid them honestly points out that every single one of his commandments is based on lessons learned the hard-way--and his sense of fun, daring and self-effacement is clear in his promo video:

"God, I love my job!"--something that every person wants to say but rarely does. But as the philosophers, CEOs and baseball players tell us, if you work hard enough at what you love, someone may eventually pay you for it.

Viers approached Michael Wiese Productions (link) when he was unable to find a book that would teach him what he needed to know about sound. "There were books that had a chapter on sound effects or a few paragraphs on sound effects but there was nothing cover-to-cover 'this is sound effects.'"

The reaction to his first book praises Viers for his technical know-how as well as its clear prose and intent to be thrown in a gear bag. "This is a book to carry with you in the field, have next to your computer, in your editing suite and taped to your cereal box so you can read it while you have breakfast." Most of the reviews on Amazon are extremely positive, with the occasional detractor who discounts Viers' hard-knocks method of trial-and-error--perhaps not going deep enough into the academic universe of sound recording. 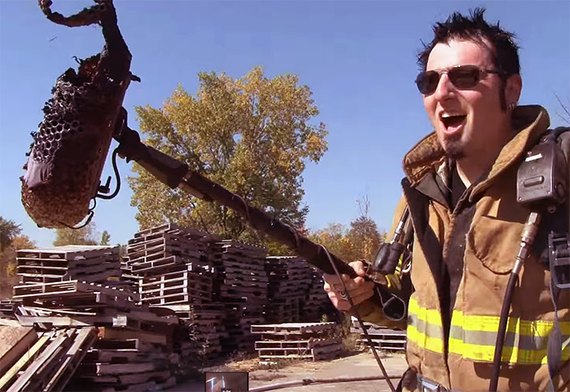 But his humility and willingness to admit mistakes--as evidenced by the flaming mic "blimp" and his burned hand illustrate that if you can't have fun while you learn, what's the point?

Pause right now and make a quick list of what you're hearing.

Maybe it's your computer fan, your stomach gurgling or the traffic noise at the red light (where you shouldn't be reading this post). It's impossible for Viers to walk into a room and not notice every noise. On the set of a film, as the lighting guys sweep in and set up their gear and the DP discusses the shot with the director and actors, the sound team has already identified every distraction that might move the audience from the "reality" of the film--often the normal sounds of a furnace or refrigerator. In the flurry of moving between locations and having to rush in and out of sets, one of the casualties can easily become hundreds of dollars in spoiled food. During one shoot, director and cinematographer Wes Heath advised Viers to put his car keys in the refrigerator, "That way when we're done, you'll remember to turn the refrigerator back on."

This Commandment #6, Eliminate Background Noise, provided humorous life-lessons for the students. Viers is obviously an expert, but his humility in knowing himself enough to know he'd forget the fridge made the students laugh and relax--and therefore learn. 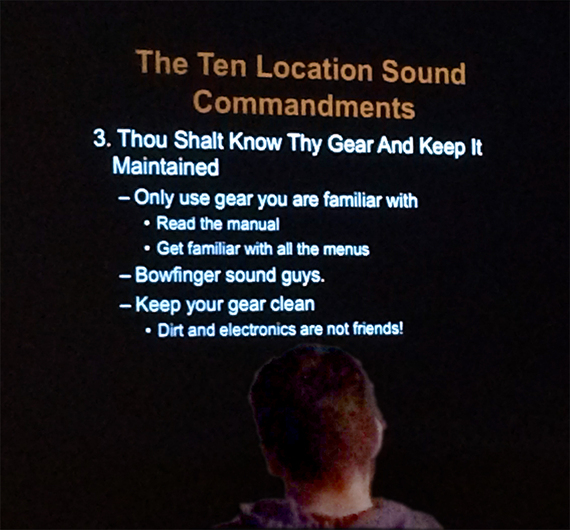 Notable commandments, that not only apply to sound but to life, include:

#2: Thou Shalt Be Prepared for Anything

Bring two of everything; Murphy's Law is fully enforced on a film-set, but if you have a spare cable, camera, microphone in the trunk you'll never need it. Viers explains the importance of his "Oh Crap Kit"--a tackle box full of miscellaneous $2 connectors that will cause an expensive production to come to a screeching halt. "If I'm ever out recording and I'm missing something that I need and I hear myself say, "Oh Crap!," more than likely the solution to that Oh Crap moment is going to found somewhere in that tackle box."

#8: Thou Shalt Keep Thy Gear Organized

A trip to the dollar store can keep you employed. On a film set, as the various departments and their gear are moving all over the place, it's vital to have what you need at-hand--often in the middle of extreme stress or in the dark. Better to have little boxes in big boxes that let you know by the missing compartment that something is missing than a duffel bag full of wires. Hurry up and wait is the mantra of the film industry; but when you hurry up, you'd better fly.

#9: Thou Shalt Play an Active Role in the Production

Hollywood is full of stories of legends in the right place at the right time--with the right attitude. If you compartmentalize your job and refuse to help your neighbor, you may not be asked back. But, Viers cautions, there's a fine line in the role of the "helper." He recalled one instance when he noticed some fan noise in the background but "sometimes it's just that look you get from the producer, that little scowl that says, 'Dude, we don't care, it's just audio...and I have to back-off how proactive I am in the production." But overall, the team-players with the right attitude of pitching-in stay working. 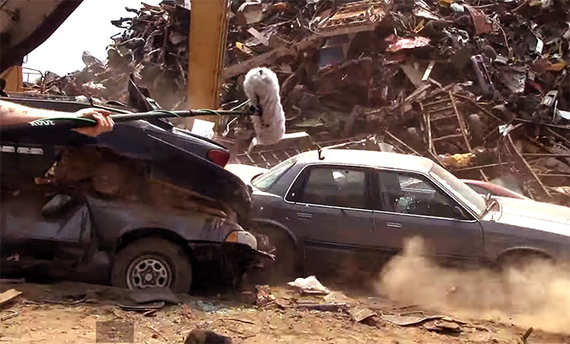 The soft skills that keep you employed are what Viers stresses the most--the same embracing of mistakes and learning from them exhibited in his successful books. "They'll call someone who has a much better personality and is easier to get along with and maybe doesn't know as much and isn't as skilled as the know-it-all or arrogant jerk."

Viers now has two more books in the works and is a sought-after speaker--but he finds the energy to donate his time, advice and autographed books to students who love the art of sound--and learning--as much as he does.

You can listen to Kevin's podcast with Ric Viers by clicking here.

For more information on Ric Viers go to www.RicViers.com.