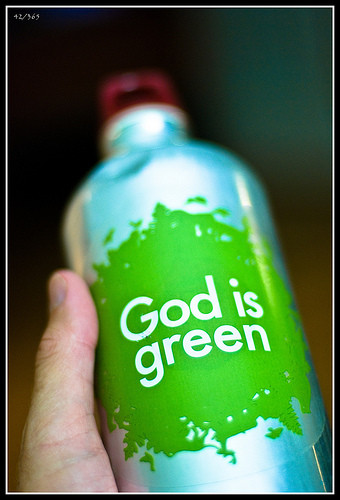 While I'm no militant environmentalist by any stretch of the imagination (I recycle; I don't compost), I do considered myself something of a tree-hugger.

There's even a sticker on my car that says, "God is Green." It's a statement of faith.

Still, when talk turns toward carbon footprints and global warming, lately a certain melancholy -- almost a vague acedia -- has begun to shadow my heart.

It all seems so ... Sisyphean.

We've abused Mother Earth and she's not happy about it and it may be too late to fix the fakakta mess we've made of our ecology.

Sure, in recent years a light bulb has gone on over the heads of religious leaders: "Aha! We should probably do something about this whole Earth-is-going-to-hell-in-a-handbasket-and-we-don't-mean-spiritually thing."

Such attention from people of faith -- Christians, Jews, Muslims, Buddhists, Hindus, and a host of other religious traditions -- is a good thing. Nevertheless, none of the spiritually leaning environmental message I've listened to has grabbed my soul and given it a good shake.

That is, until a few weeks ago when I heard a humble prophet named Bill McDonough speak in Laguna Beach, Calif., my new hometown.

I didn't know much about McDonough other than the fact that he did something in the business world, and I expected little from the evening apart from supporting a friend's effort to bring world-class speakers to our sleepy surf town and sipping a glass of free Chardonnay.

I certainly didn't expect to have an epiphany. 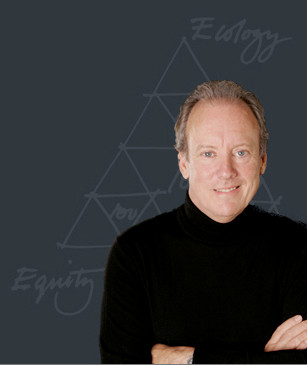 McDonough is an internationally renowned architect and chief proponent of what some have christened the "Next Industrial Revolution." For 25-plus years he has led the development of cutting-edge sustainable (i.e., "green") architecture and, moreover, a philosophy of design that turns dominant design, business and environmental paradigms on their heads.

"Our goal is a delightfully diverse, safe, healthy and just world, with clean air, water, soil and power -- economically, equitably, ecologically and elegantly enjoyed," McDonough and his partner, chemist Michael Braungart, say of their "Cradle to Cradle" design philosophy. "How can we support and perpetuate the rights of all living things to share in a world of abundance? How can we love the children of all species -- not just our own -- for all time?"

Cradle to Cradle (or C2C) is McDonough and Braungart's answer to the "cradle to grave" model upon which so much of the world's design, consumption and commerce is based. We have designed products and industry that are made to be disposed.

In landfills. In the ocean. On the scrap heap of outmoded ideas and thinking.

Watch McDonough's explain his C2C philosophy at the 2005 TED convention below:

Here's where McDonough's message gave my soul a good jostling: The Earth is designed -- beautifully, elegantly -- to work and work well. It's meant to be self-renewing. It is intended for abundance, not scarcity.

As a believer, such ideas should have been self-evident to me, I suppose, but they were not or maybe they'd become obscured by years of hearing the message that we had to conserve before everything runs out (next year if not sooner.)

McDonough argues that the idea of, for instance, reducing our carbon footprint is essentially an effort to be "less bad." It's akin to beating your dog three days a week rather than five and praising it as progress.

"To be less bad is to accept things as they are, to believe that poorly designed, dishonorable, destructive systems are the best humans can do," McDonough and Braungart wrote in their book, Cradle to Cradle: Remaking the Way We Make Things. "This is the ultimate failure of the 'be less bad' approach: a failure of the imagination. From our perspective, this is a depressing vision of our species' role in the world."

Instead, McDonough asks, "What would it mean to be 100 percent good?"

Buildings can be designed to act like trees, McDonough explained to us. He has designed and constructed buildings that filter water, harness the sun's power, clean the air, are lit with natural light and with "green" (literally) roofs where native plants, grasses and birds flourish (even in the middle of downtown Chicago.)

In McDonough's buildings, waste becomes food. Materials are recycled and reused. Next to nothing winds up in a landfill. By choosing designs and materials that are not only non-toxic (or the closest to it available at this point) but also healthful we can change the world in tangible, lasting ways.

McDonough's latest effort is creating an organization that will certify products as C2C approved so that consumers will know that what they are buying and using is part of a regenerative system. The C2C certification is "a multi-attribute eco-label that assesses a product's safety to humans and the environment and design for future life cycles. The program provides guidelines to help businesses implement the Cradle to Cradle framework, which focuses on using safe materials that can be disassembled and recycled as technical nutrients or composted as biological nutrients."

If the C2C logo is on the packaging (or lack thereof -- natch!) you can be sure it has been designed with cradle-to-cradle and not cradle-to-grave in mind. By requesting and buying products that do the same, we can move the market to demand clean, healthful, restorative goods and services. By making conscious choices to invest our money in products, designs and commerce that are healthful and positive for our planet, we reward inventors, manufacturers and businesses that produce, transport and sell them.

Baby blankets that give our children nutrition rather than Alzheimers later in life. Doornobs that deposit positive doses of needed minerals on our hands rather than toxic discharges. Factories where the water that comes out is even cleaner than the water that goes in.

"Design is the first signal of human intentions, so what are our intentions?" McDonough says. "Modern culture appears to have adopted a strategy of tragedy. If we come here and say that we didn't intend to close global warming, it's not part of our plan ... well,  it's part of our de facto plan because it's the thing that's happening because we have no other plan. ...

"It took us 5,000 years to put wheels on our luggage. ... So there is no end game. There is an infinite game and we're playing in that game," he says. "The good news is the news of abundance and not the news of limits."

Recently McDonough has agreed to take those ideas and try to implement them at the WalMart corporation -- the nation's largest employer and a behemoth on the world market -- to try to transform it into a global leader in ecological improvement. He's a visionary, one with seemingly unending preserves of energy, ingenuity and chuzpah.

Using our imagination, intelligence and buying power, we can set the Earth on a path to healing and also ensure that future generations of all God's creatures (great and small) rest -- nourished and cared for -- in its loving, ample, natural embrace.

As a person of faith, how do you disagree with that?

Well, perhaps you could if you believe that the Earth is a cosmic rental car to which God has loaned us the keys to drive recklessly, strewn with fast-food wrappers, dent, ding, scratch and then leave by the side of the road when it runs out of gas.

McDonough's vision was refreshingly clear, intelligent and overwhelmingly hopeful. It spoke to our creativity, imagination and (divine) call to be caretakers, rather than dominators, of this garden of ours.

While he never spoke in explicitly religious terms, it was one of the most spiritually powerful messages I've heard in ages.

The Creator designed Earth to work seamlessly, a great cycle of life.

We just need to get out of our own way and start working with that design rather than against it.