Churches have done some elaborate things to attract new worshippers -- and one Pennsylvania congregation is taking a leap of faith with its sexy new billboard. 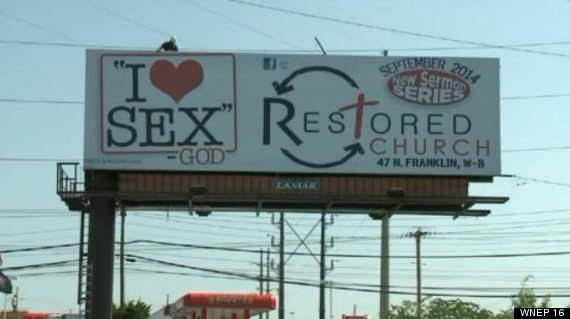 Restored Church of Wilkes-Barre, PA paid for a billboard along Route 309 that reads "'I love sex.' -God" and promotes the church's new sermon series that will focus on the biblical Song of Solomon.

"What we want to do is let people know that the Bible is relevant to everyday life. When it comes to sexuality... God is the the inventor, author and creator of it," Restored Church's Pastor Dan Nichols told HuffPost.

The Song of Solomon is indeed full of some of the sexiest passages in the Bible. The first lines read:

Let him kiss me with the kisses of his mouth—
for your love is more delightful than wine.
Pleasing is the fragrance of your perfumes;
your name is like perfume poured out.
No wonder the young women love you!
Take me away with you—let us hurry!
Let the king bring me into his chambers.

The series will kick off on September 7 with a sermon by Dr. Mark McGinniss of Baptist Bible Seminary who wrote his doctoral dissertation on the Song of Solomon. Pastor Nichols and other Restored Church pastors will lead the subsequent worship services, ending the series with a Q&A panel on the final Sunday.

“If the culture can be so bold, I think the church can be so bold and speak directly on the subject and be up front about it," Nichols told WNEP 16.

Nichols, who is 26 and married, said he hopes the billboard will attract millennials from local colleges to the church. Although he said the church's overarching message emphasizes sex between a husband and wife, one of the sermons will address sex in single life which might be more pertinent to a younger audience. Overall, Nichols told HuffPost he believes the topic will resonate with all.

"We want to reach college kids, but the message is multi-generational," Nichols said.

Restored Church opened its doors on September 8, 2013 and has a congregation of roughly 100, Nichols told HuffPost. The church's first billboard was erected for its grand opening with a message that read "No perfect people allowed", with the intention, Nichols said, of highlighting Jesus' own perfection.

The strategy worked at the time, but the feedback over the recent billboard has been mixed, Nichols said, with particularly harsh criticism coming from other Christians.

"Evangelicals can be pretty divisive amongst themselves," Nichols told HuffPost. "We've gotten a lot of flack from other Christians."

Restored Church tweeted a picture of its shiny new billboard on Wednesday -- two days after the nearby Wilkes University commenced classes:

The billboard is up! pic.twitter.com/ZYkTjsXvLL