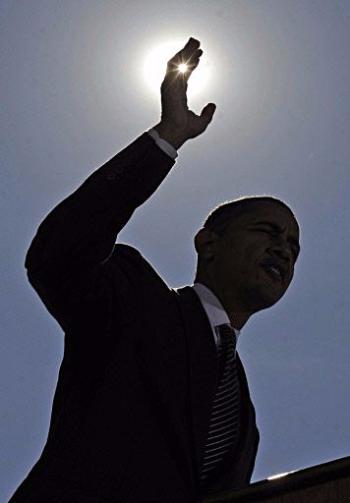 My God that's some shot, right?

Given the likelihood of an Obama administration, it's not too early to target how BHO will be framed through spoken, written and visual language. In particular, each of us should be calling out media images that do little more than perpetuate stereotypes and reinforce fear- and hate-base fantasies of the opposition attack machine.

As Obama closes in on the Oval Office, a theme that has already been absorbed into the media mind is the McCain campaign's "messiah" attack (launched by Team McCain's "The One" ad). While raising anxieties about a President Obama's exercise of power, framing Obama as an aspiring deity also works like a red cape in the face of the Christian right by flaunting the notion Obama somehow sees himself as a God, God himself, or, the son of God.

Look, for example, at this image accompanying Thursday's AFP story about Obama's potential transition plans. In it, we see the sun playing symbolically like the power of the divine. With Obama in silhouette, the theological allusion further suggests him harnessing an orb of divine light in his hand while delivering a gesture reminiscent of Jesus giving a blessing or sign of divine mercy.

Over at BAGnewsNotes, I've pulled a different visual to accompany this same write-up. The shot over there features photographer Jeff Reidel's parting shot in GQ's recent and largely cynical photographic campaign portfolio. In the photo, we see Obama seeming to recognize and receive the heavenly light of a (pro-American) deity. It's the virtue of that connection which seems to bestow on Obama a "chosen" status as standing for the earth-bound flag.

Say hallelujah if Obama scores a victory on Tuesday. But be careful not to say it too loud, because the right, abetted by the media, is already working those halos, rainbows, streaming rays and reflecting beams to suggest that Obama -- this vanity worshiper, this black Jesus -- has bumped his pay grade to the golden realm.

For more politics with the sound off, visit BAGnewsNotes.com (and BAGnewsNotes @Twitter).