New Yiddish Rep's astonishing revival of Sholem Asch's God of Vengeance, performed in its original Yiddish with projected English subtitles, takes the audience to a modest-looking Jewish household in an indeterminable time period. Sarah (Tony nominee Eleanor Reissa, who also directed the play) and her young teenage daughter Rifkele (Shayna Schmidt) are cheerfully preparing for a party. It's a special occasion: Yekel Tchaptchovitch, the family patriarch, is buying a Holy Scroll (also known as a Sefer Torah) for Rifkele to keep in her bedroom. For the audience, it all appears as wholesome as could be. We then meet the austere Yekel (Shane Baker), the protagonist of the play. Yekel is more than happy to speak (some may say "boast") about his wealth, but we quickly detect his ambivalence about the dubious "business" which brought him that wealth-- as well as his anxiety over his family's "reputation" in their town. Both he and Sarah make cryptic references to their pasts, which leads us to believe that there's more to this family's history than meets the eye. Just what kind of business is Tchaptchovitch involved with?

The audience finds out soon enough. The business is a hazyl (brothel), in the cellar of the Tchapchovitch house. Yekel, called "Uncle" by his workers, is the owner of the brothel, and Sarah used to be a prostitute. Despite the questionable goings-on in the cellar, Yekel and Sarah are determined to keep their daughter pure, modest, and virtuous-- and, most importantly, make her a suitable bride for a nice Jewish man. In addition to obtaining the aforementioned Holy Scroll as a dowry for a future husband, keeping Rifkele respectable includes keeping her away from the alluring, wild-eyed prostitute Manke (Melissa Weisz), whom she is fond of. A moral conflict ensues: Tchapchovitch acknowledges his unsavory past and present, but doesn't want his daughter to pay for "the sins of the parents". He hopes that God will be "one of mercy and forgiveness", rather than the "God of retribution and vengeance" which inspired the play's title.

Written in 1906, Asch's God of Vengeance premiered on Broadway in 1923. With its themes of religious hypocrisy, gender roles, and forbidden sexuality, it's no surprise that the play caused quite a scandal. The show's manager, producer, and entire cast was arrested and successfully prosecuted on obscenity charges. This was largely due to the much talked about "lesbian kiss" between Rifkele and Manke-- the first ever on a Broadway stage. Other scenes were considered blasphemous, including a character's "calling out" God for His perceived cruelty, and the desecration of the play's pivotal Sefer Torah. All of those scenes remain in this new version of God of Vengeance, and none of them have lost their potency. The shock value of the infamous same-sex kiss may have diminished as we enter 2017, but the scene of Weisz' untamed Manke seducing Schmidt's naive Rifkele is no less provocative to watch almost a century later. Asch's original script and deft direction by director Reissa combine to make the forbidden encounter between these two widely divergent representations of female beauty and personality very believable.

The entire cast is superb, with passionate portrayals of the characters. In a complex role, Shane Baker is excellent as the gruff (yet superficially charming, when necessary...) Yekel Tchaptchovitch. He meets his dramatic counterpart with the equally intense David Mandelbaum as Reb Eli-- a rabbi with, shall we say, dubious integrity (the kind of holy man who can solve your moral dilemma for "another hundred rubles"). Luzer Twersky, as brothel manager Shloyme, and Caraid O'Brien, as his mistress Hindel, are also engrossing to watch. While hardly provoking sympathy, their characters' seemingly unapologetic lack of internal moral conflict makes for an interesting contrast with Yekel and Sarah. Rachel Botchan and Mira Kessler are endearing as "working girls" Reizl and Basha.

From the first to the final scene, the acting strengths of the cast quickly ease any hesitations that the audience may have about seeing a play performed in Yiddish. The story, timeless themes, and searing sense of drama transcend language. At the shocking conclusion of God of Vengeance, the concept of language will become somewhat irrelevant anyway: The audience will truly be left speechless.

(All photos by Ronald L. Glassman.) 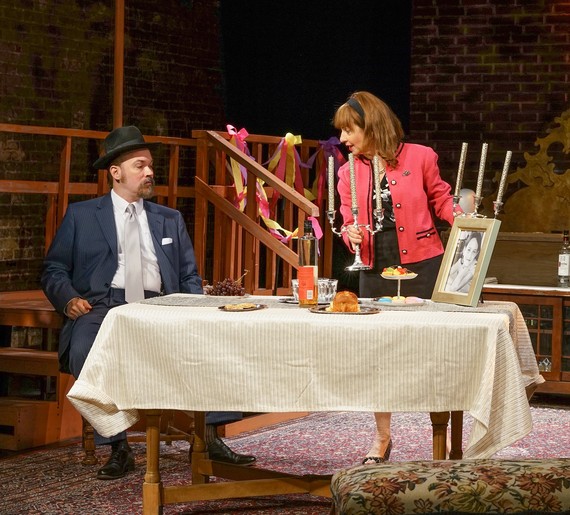 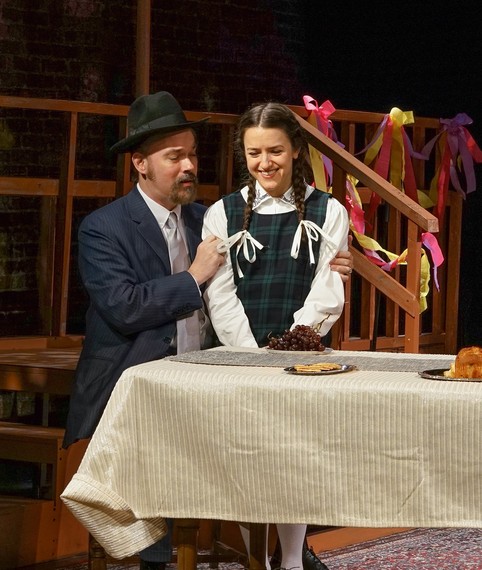 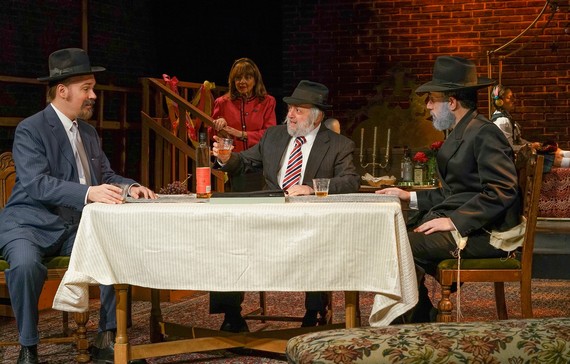 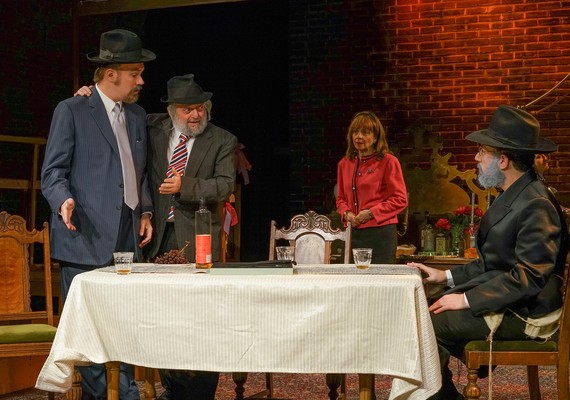 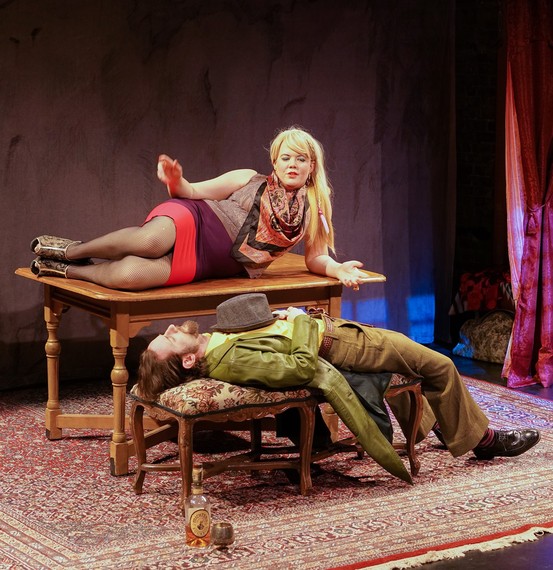 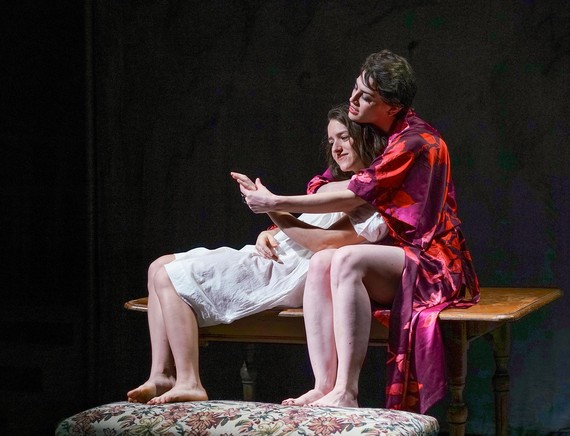 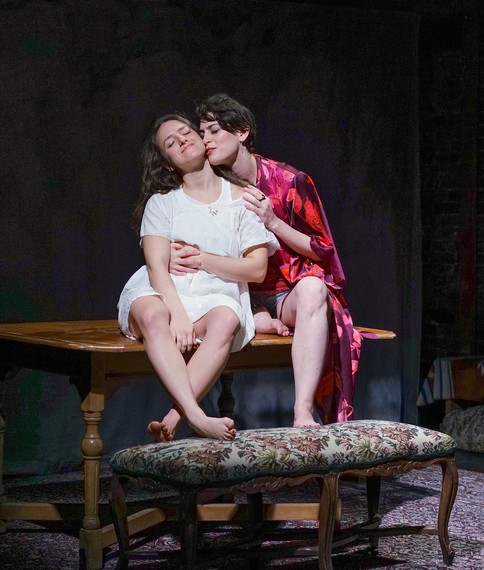 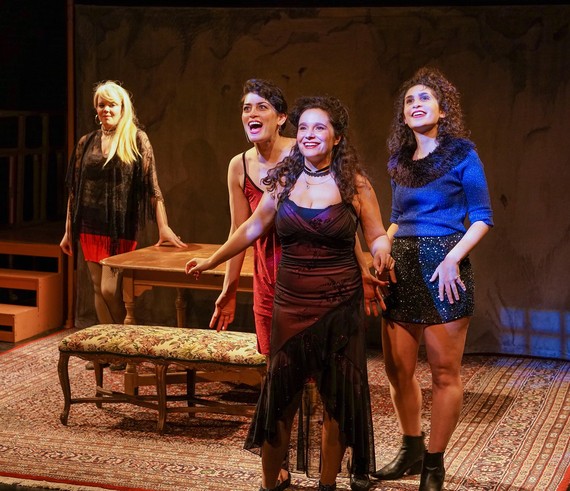