As a resident in the Gulf Region when the uprisings began, I later wrote a children's book to encourage progress in the Middle East. But as close as I was to some of the issues, like most Americans, I continue to marvel at the complexities of the current conflicts.

It proves challenging to answer the most basic questions: Who is the fight between? Why is there a fight? What does a win look like?

It is not clear. Maybe we are not even fighting the same fight, which is why we are not easily winning. Al Qaeda's leadership is fighting a disruptive battle against anyone who would like to control regions for purposes of money and power. It is not a country. It is a club of roaming, powerful leaders who spend a lot of their time raising money to create the perception that they are the answer to the economic hardship people face in that region.

For the moment, do not let that confuse you with the club of powerful, roaming leaders who spend a lot of their time raising money to create the perception that they are the answer to the economic hardship people face in this region.

It has also been pointed out that al Qaeda would like to disrupt our elections, but which candidate would they prefer to have as an enemy? If they have a preferred enemy it is also not clear to many. 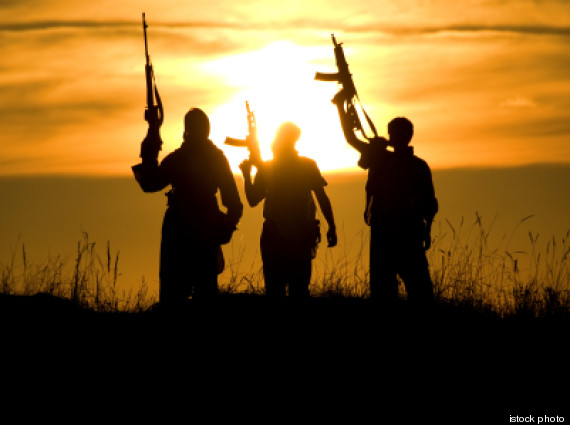 Al Qaeda's soldiers are not fighting the money and power battle, however. The actual foot soldiers and suicide bombers are convinced that they are fighting a religious war to defend against Christian invaders and American imperialism over Islam in general. They are taught to protect the turf of Islam, their Prophet and all things good in this world. Soldiers are being told that to die for this cause is certain to gain them high rewards in heaven. The two Quran verses 'Fight in the cause of God against those who fight you, but aggress not' (Quran 2:190) is twisted to mean that Americans have attacked them first and so they are allowed to fight back; and, 'Whoever fights in the cause of God, then gets killed or attains victory, we will surely grant him a great recompense' (Quran 4:74) is used in achieving the mindset of warriors willing to die for their noble cause.

So far we can count two kinds of battles. One over the privacy and autonomy that al Qaeda leadership would like to have in the world so they can advance their interests, and one against trained armed forces of God mobilized to defend a high and just cause of Islam.

Now enter a third group -- the often young and frustrated public of many of the countries in the Middle East. Not even technically fighting for any al Qaeda cause, are "they" now against "us" too? Did the same social media that helped facilitate democratic and positive change in that region also just become an effective tool for al Qaeda in riling up demonstrators across a large region? You bet.

A battle for control over creating social perceptions is on as well. Did al Qaeda find a way to communicate directly with large groups of Muslims across many countries, infuriating the Muslim masses that America had shamed their Prophet in a film? Oh, yes they did. Battle No. 3 is now social media and the battle of perceptions using media. Reputable news sources are now circumvented by un-vetted tweets. "The media" that used to create and control our perceptions is no longer "the media." Tweets, YouTube videos and Facebook posts by private people or sinister groups with their own agendas can grab a lot of mindshare in a hurry.

Now consider for a moment that the filmmaker is in fact an Egyptian Christian, not an American Christian from one of the traditionally American brands of Chrisitianity.

Let's say that either we Christians or we Americans could get to the bottom of who "they" are and are able to figure out the true enemy or enemies, who exactly do "they" think they are fighting? Since the Continental Congress met in 1778 and decided, among other things, that Christianity is not the official religion of the United States of America, are they fighting a religious war against a non-religious group? Seems like some of them are.

Plenty of Americans are Christians who may not even know that we are not a Christian country, so does it matter that "they" do not know what we ourselves may not know? For the most part, Americans are Christians who will proudly die for God or for country, depending on the situation. Many would die for both without even questioning the situation. Throughout our history as a nation, it has not always been all that clear for us either. I wrote a chapter on the difficulties sorting this out in my upcoming book, "Crisis of Faith."

Why? Disparity. Greed. Fear. Frustration. Illiteracy. Desperation. A recent interview with a Syrian rebel on AC 360 revealed he didn't care where the money came from for his cause. If al Qaeda gave the rebels money he would gladly be loyal to them.

For 40 or so years the U.S. has been a depending on oil from the Middle East. From their perspective, like any addict, we have become demanding, controlling and at times irresponsible.

From our perspective, as a high paying customer, we feel we should be treated with great levels of service excellence because we can buy elsewhere or use our own natural resources. Instead we are hated, we are blamed and sometimes we are killed.

If the U.S. stopped buying oil from OPEC countries would al Qaeda's funding be constrained so much it might disable them from the top down? Clearly we buy from many other places that do not funnel funds to al Qaeda terrorists.

T. Boone Pickens revealed "The Pickens Plan," a plan to rely on our natural resources, to Tony Robbins on Sept. 16. He insists the U.S. has plenty of natural gas reserves to completely stop our dependence on the Middle East for the very reasons that al Qaeda gets some money from the OPEC providers.

Would a straightforward oil business deal flat lining be able to save tens of thousands of lives every year (both "ours" and "theirs") head off a whole lot of domestic hardship and save many billions of taxpayer dollars? Sure sounds like it to a lot of people, but why didn't Washington nibble at the Pickens Plan?

And, why isn't either presidential candidate singing that "time for new oil relationships" tune? Plenty of undecided voters would buy into that strategy. Battle number four is clearly that we are fighting ourselves.

Could we be fighting money on a money front, a religious battle on a religious front, a social media battle on that front and checking Washington into some kind of 12-step program to end our dependency on OPEC oil? Probably.

The good news is that, despite how difficult each battle is, Americans are actually really good at each of these things. We have scores of financial hot shots who could help map out new arrangements with other oil providers. We Americans are proud, veteran addicts who have weaned ourselves off numerous foreign dependencies, starting with English tea. We are social media leaders, and we have tens of thousands of thousands of divinity school graduates who can aptly position us for better footing with the Muslim world. The vast majority of the world's Christians have adopted nonviolence in the modern world and no longer not react violently to the many affronts to their religion. Perhaps with better interfaith dialogue progress could be made on that front.

Even fixing Washington is within our reach, we just need some clear objectives and measurable milestones. It is complicated but not impossible.

As with any large scale, complex problem, we can't just start shooting at it and hope it goes away. There is no quick fix. Think twice about voting for a candidate who thinks he has one in 2012.

Our problems in the Middle East need to be broken down into their various layered parts and worked on systematically over years, not months. If we start on this today, working all the complicated and delicate angles, maybe our kids will not live in the dark about what is going on around them. They may not live in as much fear, as much debt or as much shock at just how hated "we" have become in the world.

That's what a win looks like. It looks like the absence of hardships and more peaceful times ahead: more lives and dollars saved; less controlled and manipulated media; better interreligious cooperation; more of a long-range, flexible business mindset in Washington. The win does not look like one thing, just a bunch of things going in the right direction without bloodshed.

Bringing these complexities out into the light for people is the only way we can win. People do care. People do want to be informed about the truth however complicated. Isn't it getting old to keep playing defense because we're always in the dark?