Take one of cinema's greatest filmmakers, give him one of the most innovative visual tools of the past decade and the result is something truly spectacular. In "Goodbye to Language," the 39th feature-length film from Jean-Luc Godard, the French New Wave master reimagines the use of 3D to create something that goes far beyond mere visual illusion.

"Goodbye to Language," which tied for the Jury Prize at Cannes earlier this year and had its U.S. premiere at the New York Film Festival, tells a simple story: It's about a married woman and a man, a dog wandering through nature and, eventually, a baby. Like most of Godard's work, "Goodbye to Language" is filled to the brim with disjointed fragments of philosophical musings between characters -- one woman repeatedly asks offscreen, "Is it possible to produce a concept about Africa?" The idea behind the film may be straightforward and quite literal as it plays with both images and words to question the current state of cinema and the ways we can perceive it, but the act of watching the film is mentally and intellectually challenging. 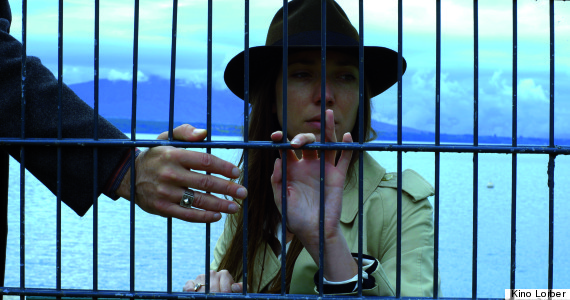 Throughout, Godard juxtaposes, superimposes and disconnects imagery and sound -- he simultaneously uses 2D with 3D, stereo sound with mono sound, and documentary footage and old movie clips with handheld footage. To introduce the multiple sections of the film, Godard superimposes words in title cards: the text "2D" is flat on the screen while the word "3D" is layered on top of it, popping out at you. "Goodbye to Language" constantly scrambles and plays with your brain until, at moments, you're not quite sure what you're viewing or exactly how to look at it.

Take for instance one of two shots in the film that have never been done before in the history of cinema. The moment is so innovative and unusual that Godard and his cinematographer, Fabrice Aragno, didn't even have a name for it (Aragno has referred to the shot as "separation," for lack of a better term).

"I began thinking about making something in 3D that can only be in 3D," Aragno told HuffPost. "3D means two images, one left and one right, and both can be together, but you can also make one image different than the other." That's exactly what the cinematographer did, shooting scenes with two separate cameras, then overlaying the 3D images to create a warped, multi-layered illusion that forces the eyes to readjust. 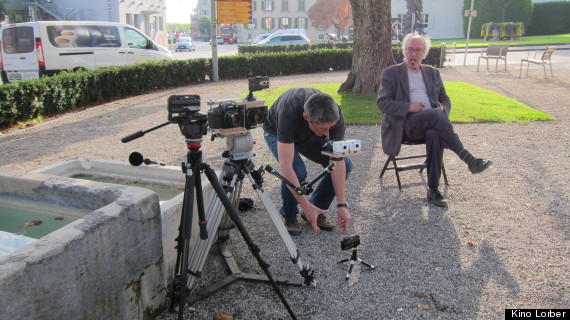 In one scene we see a woman and an older man, her lover, sitting on a bench. A second man, her husband, appears with a gun and pulls the woman out of the shot and to the right. But instead of cutting back and fourth between the action going on in the separate shots, Aragno used two cameras to capture both in 3D. The result is a layered image of the woman and her husband combined with the left-hand-side image of the man on the bench. If you close one eye, you will only see the woman and her husband, if you close the other you will only see the man on the bench, and if both eyes are open your brain will struggle to view them simultaneously. Yet at the end of the wild visual experiment, the separated images join back together in what Aragno has called a "romantic effect."

While the experience of watching the film in 3D is an incredibly unique one, Aragno and Godard also decided to make a 2D version for audiences to enjoy. Below is the clip of the woman, her lover and her husband as it looks in 2D:

When asked if there's an ideal viewing experience for the film -- should we switch back and fourth between eyes or try to endure using both? -- Aragno admitted that he wasn't sure. While he prefers to watch the scenes with both eyes open, he said that audiences at Cannes switched between left and right. Yet his hope is that viewers can approach the film in their own way and arrive at their own interpretations. "You are the editor," he said. "You can associate what you see or hear with your own feelings."

The cinematographer recalled a line from an older Godard film when considering the relationship between imagery and language. In 1967's "2 or 3 Things About Her," a boy asks, "What is language?" A woman responds, "Language is the house man lives in.” A film like "Goodbye to Language," which is nothing short of a fascinating viewing experience, lends itself to multiple interpretations. Perhaps it is Godard's cynical take-down of our technologically-driven age and his way of imploring us to view the world more naturally, in the manner of a wandering dog. Regardless, a film like this lets us build our own individualized house of perception, fashioning it however we want to experience it.

"Goodbye to Language" has a limited release in New York City on Oct. 29, followed by a national release.