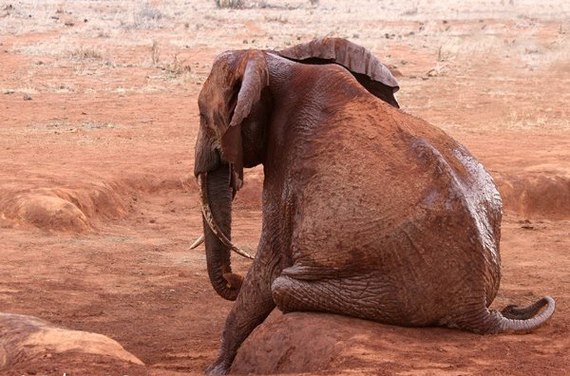 Halfway through my interview with world renowned documentary photographer, Brent Stirton, I lean in and tell him that I think I have a line to the Dalai Lama.

"Jamie, don't go there!" he says, cutting me off. "This is all about diplomacy. The public needs to be winning over China's Buddhist leaders and religious heads of authority."

Stirton's response seals my suspicions; asking the Dalai Lama to make a public stand against ivory will only anger the Chinese Government. Their citizens are by far the biggest consumers of ivory, and so it is China we have to win over.

Brent Stirton has done it harder so that we can walk further. For more than nine months of the year he traverses the continents, investigating critical global issues, and unveiling the interwoven fabric of societies through his profound visual interpretations. Working alongside investigative reporter Bryan Christy, they exposed the booming ivory trade in Buddhist and Catholic religious objects in the 2012 National Geographic cover story, Blood Ivory.

But far too little has been said about the role of religion since this story hit the headlines. Most ivory objects are religious objects, with extraordinary sculptures fetching six figure price tags -- but clearly there is a disconnect between the craft and where the ivory comes from. Every day nearly 100 elephants are brutally killed in Africa, their bodies riddled with bullet holes, and their faces butchered with axes until the tusks are yanked out.

I was raised Catholic, but have followed Buddhism most of my adult life. People buying ivory have a right to know that their purchase is causing incredible trauma. Elephants are highly intelligent beings, and they have long term supportive bonds between family members, so it's not just a species facing extinction, its massive individual suffering.

"Journalism is failing in communicating these issues," says Stirton. "Religion is a major player in the poaching crisis. We've ignored it, we've accorded religion too much respect in this regard, and we've placed devotion above slaughter."

Many people still believe that ivory comes from elephants that die a natural death. Only a very small percentage of Chinese people buy ivory, but with such a large population, that small percentage has devastating effects.

"In China, owning ivory is a status symbol that is considered a good investment," adds Stirton. "But it is also recognition of faith, and a religious totem that acknowledges their success."

Illegal ivory is flooding into China, and using legal pathways as cover. So why does the Chinese government, on one hand support environmental debate, and on the other hand they still refuse to shut down the carving factories?

"China's carving factories aren't going anywhere," says Stirton. "China now has enormous presence in Africa, they need the assets that Africa has, and the vast majority of African governments are happy to have them there. This comes before the environment."

But if China cares so much about business in Africa, then surely the African leaders have the advantage, and they can put pressure on China to shut down the ivory carving factories?

"These are not democracies," Stirton bluntly replies, adding, "There is just too much corruption, and poverty continues to be an exploitable phenomenon. The key to law enforcement is to affect the demand."

Brent Stirton has witnessed some of the most unprecedented elephant killings in Africa. Back in 2012 Stirton covered one of the largest mass elephant slaughters in decades, when, armed with grenades and AK-47s, poachers entered Bouba Ndjidah National Park in Cameroon, and gunned down more than 600 elephants over a three month period. They even killed the babies.

That same year Stirton also took first prize at the World Press Photo Awards for his assignment, Rhino Wars, which included documenting the work of the IAPF rangers based in Zimbabwe and South Africa. I tell Stirton that we're currently trying to source 'military leftovers' for the rangers, and I will return to my African homeland in October, joining the IAPF rangers on the frontline, and writing 'stories from the trenches'. The objective of that mission is to showcase the brave work of the rangers, and inspire people everywhere to take action in their own country.

"We need to support the rangers any way we can," says Stirton. "I've just returned from the Congo where my friend, Virunga Park Director Emmanuel de Merode, was ambushed and shot several times back in April. It's the middle of a war zone, and they're trying to save animals."

Suspects of the attempted assassination on Prince de Merode include the FDLR - a group of guerrillas who have been living in the park since 1996 - as well as charcoal traders and people associated with a British oil company attempting to illegally explore for oil in the national park.

In other parts of the world, and on a smaller scale, the demand for ivory religious objects by devout Catholics, in places that include the Philippines and The Vatican, is also fuelling this vile trade.

"The Vatican did eventually respond to the Blood Ivory story," says Stirton. "They changed their policy on ivory, and they issued public statements. A couple Filipino priests implicated in the smuggling of ivory were also excommunicated from the Church, so they did react."

But the issue was quickly swept away, and now with Pope Francis at the helm - a spiritual leader frequently linked with defending the environment - it is in his power to lead the charge and encourage The Church's 1.2 billion members to become defenders of elephants.

"It would be good if people continued to put pressure on The Church," adds Stirton, "People always prioritize what is happening to humans, but they fail to see how these things relate to each other."

Elephants are a keystone species, and so it's not only elephant families being destroyed, but vital ecosystems humans depend on. We're heading towards the sixth extinction, and if we cannot save the big things, if we cannot save our majestic elephants, then how are we ever going to save the small things?

The illegal ivory trade is funding transnational crime syndicates and environmental terrorism, yet mainstream news is asleep at the wheel - and so it is up to every one of us to be a driving force for change. We can and we must do more.

If elephants become extinct on our watch, it will not be because we could not find enough people to fight for them - it will be because not enough people knew they needed to fight, until it was too late.

The race for new Chinese Thinking

Perhaps during our darkest times we should borrow courage from the elephants and the rangers we have lost, because sometimes the only thing harder than fighting the good fight, is standing back and doing nothing. Their deaths should not be in vain.

Dr Jane Goodall's Roots & Shoots programmes connects hundreds of thousands of youth in more than 135 countries, and in China there are more than 900 active groups that are dedicated to educating and inspiring their own community to change cultural attitudes and lobby the government to better protect our natural world.

WildAid is continuing their mission to stamp out the ivory trade in China with the release of the 'End of the Wild' documentary featuring NBA star Yao Ming, and in partnership with African Wildlife Foundation and Save the Elephants.

A huge impact has already been made with WildAid's anti shark finning campaigns, with demand reduced by as much as 70%, and this proves that changing an ancient mindset is absolutely possible. We have a history of curbing the demand for endangered species; Europe is no longer a major consumer of ivory, and Taiwan, once the biggest consumer of rhino horn, isn't even on the map anymore as a result of education and strict domestic laws.