God makes several promises to Abraham in Genesis 12-17; these also involve Sarah, extending further to the world. The opening promise in Genesis 12:1-3 involves leaving the familiarity of home and traveling to an unknown land to be shown later. That must have taken courage!

Another promise follows in 15:1-6, where despite Abraham's childlessness, God promises to multiply his descendants as numerous as the stars of the sky. That must have taken faith! Yet another promise, in chapter 17, affirms that Abraham will be the father of many, and the children of both Sarah and Hagar--Isaac and Ishmael--also become the fathers of great nations. That must have involved perseverance!

Central to God's word, though, is the promise that the children of Abraham will be a blessing to all the families of the earth. The land and the people groups are means to that end, and nearly half the world's population is included in the larger families of Abraham: Judaism, Christianity, and Islam. But, can the families of Abraham really be a blessing to the world instead of a curse? The answer to that question will depend on how the followers of Abraham's God embody his love, hospitality, and grace. And, the fulfillment of that promise in the long run hinges upon our faithfulness in the here and now. 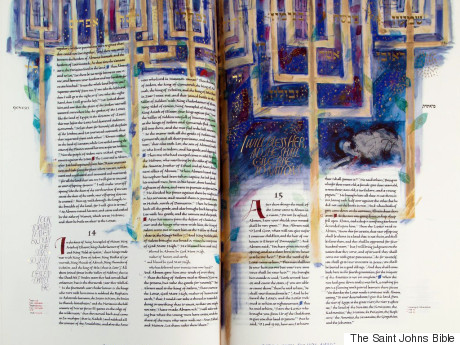 (Abraham and Sarah. Artist: Donald Jackson, 2003, The Saint John's Bible, Saint John's University, Collegeville, Minnesota. Scripture quotations are from the New Revised Standard Version of the Bible, Catholic Edition, © 1993, 1989 National Council of the Churches of Christ in the United States of America. Used by permission. All rights reserved. In support of "Illuminating the Mission" of Pope Francis to the Americas, see "A Reflection on Abraham and Sarah" by Michael Patella at: http://www.saintjohnsbible.org/promotions/lp/itm/PDFs/Abraham.pdf.)