Kaustav Mitra is an avid student of entrepreneurship and its role in the creation of new ecosystems and economies. He is the founder and Global Vice-President of SAP Startup Focus, SAP's worldwide initiative to engage with data-focused startups. In the two years since its launch in 2012, the Startup Focus portfolio has grown to 1,700 enterprise software startups from 55 countries. Prior to this he was a member of SAP's Chairman Projects team where he led a variety of board level strategic initiatives. Mitra joined SAP in 2011 after ten years of experience as an entrepreneur launching, growing and selling a managed IT services firm. 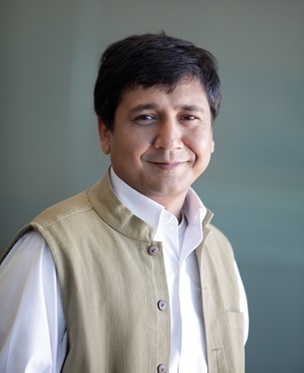 Kaustav Mitra (Courtesy of self)

Q: What does entrepreneurship mean to you and what underlying characteristics do you see in successful entrepreneurs?

KM: More than anything else, for me entrepreneurship is an adventure. If I could borrow an idea, the concept of 'The Hero's Journey', as introduced by Joseph Campbell, really would be an excellent metaphor. While Campbell wrote about this in the context of myth and storytelling, the exact same character arc can also be used for entrepreneurs. An individual, sometimes a social misfit, decides to answer a call to change the status quo and in so doing embarks on an adventure filled with moments of sheer terror and sublime joy. Entrepreneurs are a rare breed. The ones who choose to eschew security and embark on this uncertain path truly deserve the treasures they find at the successful end of their journey.

Consider one of the more famous entrepreneurs in India. Ghanshyam Das Birla literally walked the thousand miles from his dusty village in the Rajasthan desert to the bustling cosmopolis of Kolkata over several months with next to nothing to his name. He ended up becoming one of the most successful Indian industrialists of the 20th century (and incidentally, founding the university I studied at which is named after him)

Ironically, for most successful entrepreneurs I have met, money and wealth are not the prime motivating factors. While these are not dismissed, an irresistible urge to leave their mark is what seems to drive them. This comes across as an unwavering ability to focus and a determination to act on their vision, not just dream about it. I talked about this earlier this year as 'an intensity of purpose and a willingness of action' which is the title of my most recent blog.

KM: I had always planned on becoming a professor like my dad, Sujit Kumar Mitra, whom I hugely admired. Through a most unusual set of circumstances, my first job ended up being selling computers. As you can imagine I knew absolutely nothing about Sales. Since this was a small firm, there really was not much training beyond "Here's a telephone and there's the phone book." It took two very demoralizing months before I had even my first success and with it came the realization that Sales in the right context can be hugely satisfying and rewarding. Understanding that sales is NOT about extracting money from an unwilling customer but rather about earning your clients' trust and willing custom by providing valuable solutions to their problems was a huge breakthrough for me. I'd have to say this was one of the most transformative experiences in my professional career and, when asked, I've always encouraged young professionals to spend some time in Sales organizations regardless of their long term goals. The confidence you gain is irreplaceable.

Do-overs would be a harder question. In retrospect, I would probably not have spent quite as much time on my startup as I did. I spent ten years building a company and selling it. In hindsight, I could probably have made the exit several years earlier and had a similar outcome. The big lesson for me really was that I would need to set firm timelines and milestones for myself for all future endeavors, whether in the corporate world or as an entrepreneur.

KM: You just described every day of my life - I think I'm a born contrarian. If I had to take a specific example, I might point to how my current job came about. It was January 2012 and SAP had recently announced some very compelling new technology, an exciting new data management system called HANA. Things were slow given the time of year and frankly I was a bit bored. I got into a brainstorming session with my friend Amit Sinha, he runs Platform Marketing at SAP, on how we could accelerate the development of applications on this new platform. When the twin realizations struck us, of our location in the heart of Silicon Valley and the new trend of data and analytics focused solutions, startups seemed to be an obvious fit.

Keep in mind that SAP had not systematically engaged with startups in the past. When I initially pitched the idea there was a fair bit of skepticism and resistance from several very well-meaning, rational colleagues within the company. Understandably, it was hard to see how we could effectively work with such early stage firms and I did not have exact answers to all the questions. Fortunately, with some key initial support, using a model of rapid iteration, and showing some exciting preliminary results, there was a path to success. Somewhere along the way, almost accidentally, what started as a project became my full time job and the SAP Startup Focus program was born. And almost three years down the line, with the superhuman efforts of an AMAZING team, going against the flow ended up yielding some amazing success stories both for SAP as well as for the startups we support. That said, it is key to understand there are analogous hurdles at every organization, large or small.

Intrapreneurship is not that different from entrepreneurship (though I have to admit the steady paychecks help me sleep better at night). Many challenges are very similar but I'd definitely count going against the flow as being an often necessary ingredient for progress in either one.

Q: Why do you believe increasing women in technology should be a top priority for every manager?

KM: I'd actually say better gender balance in every field and at every level should be a priority for all companies. As some level I think the way people solve problems is determined heavily by their life experiences. The unique nature of who we are also determines how we approach the world. So it is certainly important to me that, given the vast variety of problems any firm encounters on a daily basis, I have access to the most diverse set of problem solving tools available to me. Ruling out 50% of them because of legacy social biases is just daft! And simply because it is hard to truly feel at ease when one is in the minority, it becomes important to have a critical mass/concentration of all genders in a team. The same argument could also be rationally extended to promoting diversity on other dimensions as well.

NPR recently ran a terrific story 'When Women Stopped Coding ' in their Planet Money show. The graph they showed, which received a lot of social distribution, is really startling. It shows a sharp reversal around 1984 of the percentage of women pursuing Computer Science degrees. Their hypothesis, which sounds very reasonable, is that the first PCs were sold in hobby shops with largely male clientele. This in turn led to cultural winds in the US around computing in the 80s being primarily about boys and men. We really need to reverse this. Vivek Wadhwa wrote a compelling blog on the same problem in a closely related area 'The glaring gender dilemma Silicon Valley venture capitalists are hiding from'. Would definitely urge anyone concerned about this topic to check these out. Closer to home, as I discussed in my own blog '#IHaveADaughter', I really want to make sure that as a parent I am keenly focused on make a fairer workplace for my own children.

KM: (Laughs) That would be a lengthy list. More than anything else, I'd probably say "Relax, it'll all be okay." Really, I think the biggest area of growth is learning to be less concerned about the opinions of others and more self-assured, more comfortable in your own skin. When you're in your early twenties, everything is filled with tantalizing potential and promise. I know that I at least was always concerned about messing up somehow or missing some fantastic opportunity because of a failure on my part. It breaks my heart when I hear about students taking drastic measures when they feel unable to cope with the pressures of impending adulthood especially since I distinctly remember the feeling of being overwhelmed at that age. Now, I still see everything as filled with possibilities but I'm able to take a more easy stance of "Stuff happens, don't worry, there will be other chances to make it right."

Check out the other interviews in Going Against the Flow series at http://www.huffingtonpost.com/charu-sharma/ or thestartupsutra.com.