Sharon Vosmek has been CEO of Astia since 2007, previously joining as COO in 2004. Astia's mission is to propel women's full participation as entrepreneurs and leaders in high-growth businesses, fueling innovation and driving economic growth. Under Vosmek's guidance, the Astia community of investors, entrepreneurs, and industry leaders has grown from 20 individuals in Silicon Valley; to more than 5,000 around the globe, representing every continent. A highly sought-after speaker, Vosmek most recently spoke at the United Nations and the Milken Institute California Summit. She has given lectures at numerous universities, most notably on the topic of building inclusive ecosystems at Stanford and MIT. Vosmek was invited to participate in The White House Women's Entrepreneurship Conference and the Presidential Summit on Entrepreneurship led by Secretary of State Hillary Clinton. In 2011 she was a US delegate to the Asia-Pacific Economic Cooperation (APEC) Women and the Economy Summit. 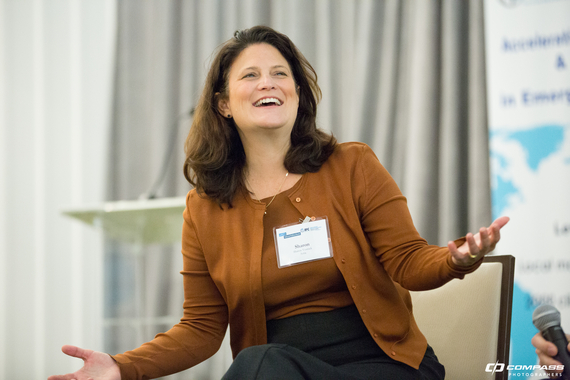 Q: What does entrepreneurship mean to you? What underlying characteristics do you see in successful entrepreneurs?

Sharon: I'm a socio-economist, and to me, entrepreneurship means job creation and economic growth for society. Interestingly, the fastest way for any individual, especially for women, to get on the board of a company or to the executive suite is to start a business of their own.

I don't consider myself to be an entrepreneur, though I am entrepreneurial. I'm very receptive to change and breaking norms. I'm a heretic, I tend to question the status quo, I go against the flow!

Studies have been conducted on the patterns among successful entrepreneurs. Men and women executed differently but they're far more alike than they're different. i) The average age of the founders of high growth startups were 38 years for men and 40 years for women, and both men and women had an average of two kids. So, having substantial workforce and life experiences was a huge commonality among successful entrepreneurs. ii) In terms of educational background, most successful founders of high growth startups had college degrees at the very least.

Q: How do male and female entrepreneurs function differently?

Sharon: Women are starting their own businesses, but not securing as much capital and this prevents them from being competitive in the marketplace. Studies show that women start with 1/26th startup capital as compared to their male counterparts. Women tend to undervalue their companies, and even when they start generating revenue, they'll think that they're an early stage venture. An MIT-Harvard study shows that white males are 63 percent more likely than females to raise capital, while using the same exact business plan and pitch. If we look at the unicorns, female CEO's will have raised less money to build a $1B company.

Besides how much capital they raise, men and women are also different in how they raise this capital. Men broadly pursue a huge and disconnected network. They talk to everyone to raise money. Women, on the other hand, leverage a much tighter, immediate network. Two very different approaches!

Thirdly, women-led teams yielded higher returns. These companies outperformed male founding teams by 63 percent. (src: Women at the Wheel, Dow Jones 2012, 15-year review of venture-backed company data) Women do more with the capital they raise. Though, the fact that women value themselves conservatively and raise less money also contributes to this whopping statistic of 63 percent. An MIT study by Professor T. Malone at Center for Collective Intelligence, shows that, in general, men and women working together outperform any model of homogeneity.

Q: How did you get involved with Astia?

Sharon: At a charity dinner, I was seated between Anita Roddick (founder of The Body Shop) and Cate Muther (founder of Astia, then known as the Women's Technology Cluster), and it came up that while women entrepreneurs constituted 80 percent of the benefactors in the microfinance ecosystem, this statistic was a mere two percent for the VC ecosystem. As an economist, I wanted to dive into this contrast and understand the barriers to entry to raising venture capital for women. Shortly after, I was at Astia and focused on inclusive innovation and investing in women-led companies.

When our former CEO left Astia, it didn't occur to me to apply for this position. I thought that we'd hire someone else. When Mitchell Kertzman, who was at the time a partner at Hummer Winblad Venture Partners called me to consider being the CEO, I listed why I was underqualified, then he listed why I was qualified and I took on the CEO role at Astia. I was appalled to see that someone as confident and in tune with the gender disparity displayed imposter syndrome here, and this incident reaffirmed to me the barriers to entry for women and my passion for creating a sustainable economy with 50 percent male and 50 percent female decision makers. We have collaborate with the White House to expand to three new markets, viz., Boston, Los Angeles and a yet to be finalized startup ecosystem in the Midwest.

Q: How do you measure your success?

Sharon: I'm a "change the world" person. I'm here to remove barriers to women's full participation in the economy. I'll succeed if I leave Astia with a higher number of women raising capital and a higher number of investors funding inclusive teams. What I'm really measuring is how we are transforming the market. It is estimated that if women had the same access to capital as men, the impact to the US economy would be as much 6-9 percent, which is tremendous!

Q: LinkedIn style - What advice would you give to your 22-year-old self?

Sharon: It's okay to know the norm and to yet ignore it! At 22, I was working for a U.S. senator. I had majored in political science in college. Only very few of my fellow political science majors actually got to go into politics. Most were working as waiters or waitresses right after school and looking for what their calling might be. I'm glad that I stuck to my guns and pursued my political passions.

Follow Sharon Vosmek at @Vosmek, and check out the other interviews in Going Against the Flow series at http://www.huffingtonpost.com/charu-sharma/ or goagainsttheflow.com.