When Vivienne Harr, Chief Inspiration Officer at Stand, was eight years old, she saw a photo of two boys, her age, from Nepal living in modern-day slavery. She said: "Compassion is not compassion without action." Vivienne decided to "stand up for these kids with the only business experience I had." She set up her lemonade stand every day rain or shine, to end child slavery. On day #52, The New York Times broke her story and a moment became a movement. On day #173 in Times Square, Vivienne reached her goal of $100,000. She went on to become the first child in American history to bottle her lemonade-stand lemonade. Of their roughly 230 million users, including A-list celebrities, humanitarian organizations and heads of state, Twitter gave Vivienne the honor of ringing the bell at their IPO on the New York Stock Exchange. Emmy award-winning Stillmotion Studios created a full-length documentary about Vivienne's story that played in theaters across North America. She published a children's book about her story that is available in stores across the country. Vivienne is the youngest person to be included in Town & Country's "50 Most Influential Philanthropists in America" She is also the youngest person to give a featured TEDx talk. Vivienne is an honorary member of The World Affairs Council where she introduced Twitter CEO, Dick Costolo. She has spoken at Twitter, Google, Square, Linkedin, Paypal, SOCAP--and The United Nations where she was "a voice for the 18 million children without one." On October 31, Vivienne will appear on stage with His Holiness the Dalai Lama at MIT to facilitate a global conversation about compassion and empathy, with children posing questions from around the world. With the help of Silicon Valley superstars like Twitter co-founders Biz Stone and Jack Dorsey, she is launching the world's first "mobile-first" crowdfunding platform: Stand. She says: "We may feel small or insignificant. But, it doesn't matter how small you are. What matters is how big you want to change the world." Vivienne Harr is 10 years old. 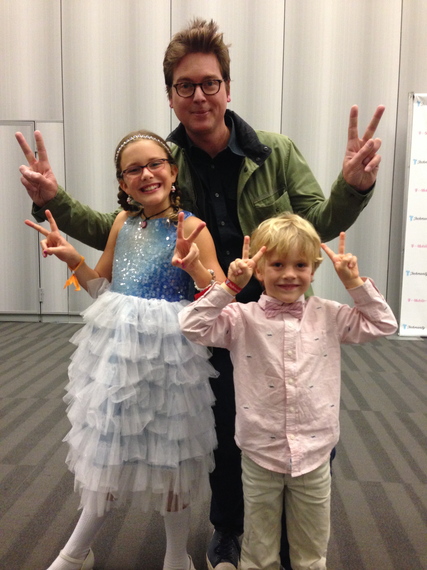 VH: It means not being afraid to live your dreams, no I mean REALLY live them. Not just talk about it, or do it on the side. My dad read me a great quote the other day and I like it: "everything you want is on the other side of fear." I believe that. No offense meant, but growups tend to have fear about trying new things. I say: don't be afraid. Think like a kid and just do it!

VH: I am most proud of the gift I have been given to help others. It's a gift and we are grateful for it every day. I don't just want to help others, I want to help others...help others! By that I mean our new mobile technology, Stand, empowers people to stand up for what they believe in and launching a crowdfunding campaign, right from their phone. Instantly and anywhere! It's not how small you are. It's how big you want to change the world!

VH: I guess you could say the "flow" for lemonade stands is to do it for a day and keep the money. I decided to do it every day for a year and give all the money away. And going against the flow was the best decision I ever made. You gotta go against the flow if you want to do great things!

Q: Tell us why you moved from lemonade to mobile technology.

VH: The lemonade business is going great and it will always help end child slavery by giving 5% of sales to the best groups that fight child slavery. But there is only so much you can do with a bottled product. Everyone has a mobile phone. Everyone is compassionate. All we're doing it helping to turn people's compassion into action and to make it FUN! I may be small, but I have a big vision! We want hundreds of millions of people to create billions of dollars of good in the world. Every year! It's simple, mobile and fun! I say: "instead of taking #selfies, turn the camera around and take #helpies!

My friend Biz Stone believes in the triumph of humanity with a little help from technology." I love that. That's what we're doing here.

Q: LinkedIn style - If you were to give advice to your future 22 old self, what would it be?

VH: "Don't lose the magic, Viv. You started two great businesses before you were 10. Just keep listening to your heart, stay compassionate and always look outside of yourself. Oh, and keep smiling. Life should be fun."

Follow Vivienne Harr and her team at @makeastandapp, and check out the other interviews in Going Against the Flow series at http://www.huffingtonpost.com/charu-sharma/ or thestartupsutra.com.