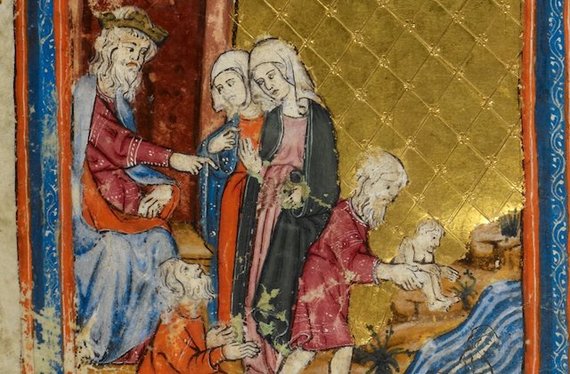 (Pharaoh and the Israelite Midwives - from the Golden Haggadah c.1320)

When unsure of what a new ruler and a new government may or may not do, what does our tradition teach us we must do?

"Then there went a man of the house of Levi, and he took to wife a daughter of Levi." (Exodus 2:1)

Classical rabbinic biblical commentary - known as Midrash - notes a perplexity regarding that verse, which comes from the biblical book of Exodus that we have begun reading in our synagogues this week.

What sense or meaning does it make, our Sages wonder, for scripture to tell us that Amram (the father of Moses, and the 'man of the house of Levi' in the verse) "went" and married Yocheved (Moses' mother, and the verse's 'daughter of Levi')? In English, colloquially, folks 'go and do' things all the time, but the turn of phrase is somewhat more unusual in Hebrew - and rabbinic interpretation considers every nuance, every peculiarity of biblical wording to be significant. So, asks the Midrash, "Where did he go?" (Exodus Rabbah 1:19)

The Midrash answers that Amram 'went' according to the counsel of his daughter, Miriam the prophetess - that is, he followed her advice.

As narrated by the Midrash, when the new Pharaoh "who knew not Joseph" imposed harsh decrees upon the Israelites in Egypt, culminating in the order that every male baby born to them be thrown into the Nile, Amram separated from his wife Yocheved, so as not to run a risk of falling subject to that horrible command - whereupon, says the Midrash, all the Israelites began to follow Amram's example, he being a man of high standing among them.

"Father," said Miriam to Amram, according to tradition, "Your decree is harsher even than that of the Pharaoh - for Pharaoh has decreed only against the males, and you abolish both male and female offspring; Pharaoh's decree is of this world, but yours impacts this world and the world to come; Pharaoh's decree may come to pass and may not, but among our people the example of such a righteous man as you is bound to be followed." (Babylonian Talmud, Sotah 12a)

Thereupon, Amram immediately remarried Yocheved, with Miriam and her brother Aaron dancing in joy before the bridal litter. (Exodus Rabbah 1:19) And we well know that the outcome was a child, Moses, who, despite the Pharaoh's decree, went on to be instrumental in Israel's redemption - fulfilling the vision and vindicating the saving action of his prophetic sister.

Our Torah narrates similar defiance and visionary action on the part of the two Hebrew midwives - Shifrah and Pu'ah - who, in disobedience of Pharaoh's ordering them to smother every male child, spared the baby boys born to the Israelites. (Exodus 1:15-21)

According to another close reading of the biblical text by our Midrash, Egypt's Pharaoh invited the midwives into intimacy with him; but not only did the two women choose not to become party to the monarch's wickedness, as told by the Midrash they also went from house to house ensuring that babies born into poverty had sufficient nourishment to thrive. They "saved" the babes "alive," as the scriptural words have it (Exodus 1:17) - not just refusing to enact a cruel and fatal decree, but creating the conditions of survival, according to the interpretation. (Exodus Rabbah 1:15)

A colleague asked me this past week what guidance our Jewish tradition has for endurance in hard governmental times, what wisdom our tradition has to offer in moments when the apprehension is that new rulers may impose decrees out of step with the concerns of our Torah, removing protections aimed toward the health and wellbeing of the most imperiled in our society, diminishing a disadvantaged person's chances not only of getting ahead but of surviving in the first place.

In response, I can only observe that our Torah and the tradition of our rabbinic Sages both teach that, whatever a government may do, it is our responsibility to create, to sustain, and to protect a just society. That is the example and the inspiration of the midwives and of Miriam, according to our scriptures and according to our Midrash.

If a harsh decree ever threatens to remove a protection or to create a vulnerability, it is our duty to step in, personally, so as to ensure that care and goodness flow where, by divine decree, they must. That is not to say that we are to give up the work of influencing government. Witness Moses in Pharaoh's throne-room in the upcoming stories of our Torah. However, in the meantime, we are not to play in to the hand of leaders whose orders run contrary to our values - as Moses' father and as the midwives might have done had it not been for a countervailing and prophetic sense of what was right.

In 1951, even before the recognized inception of what would become known as the Civil Rights Movement, Rabbi Abraham Joshua Heschel wrote in an essay entitled, "To Be a Jew, What is It?" -- "It is our destiny to live for what is more than ourselves."

"To be loyal to Judaism means to affirm it even at the price of suffering," Heschel wrote; and, as Jews, he said, "we have to face our existence in terms of sharp alternatives: we either surrender to the might and threat of evil or persist in the earnestness of our existence."

We see this week in our Torah how the Israelite midwives practiced this principled way of being - and our Midrash teaches us how Miriam influenced her father to do so. "Then there went a man of the house of Levi, and he took to wife a daughter of Levi."

That is what our tradition teaches us to do in the times of a "melekh chadash asher lo yada" - in the times of "a new ruler who did not know." We know, we must remember, and we must keep on keeping on.

Whatever any ruler and any government at any time may or may not do, we must do what we must do - we must do what our tradition teaches us, as Jews, we have to do - to sustain our vision, to create a just society, to care for our families, our children, and everyone's.