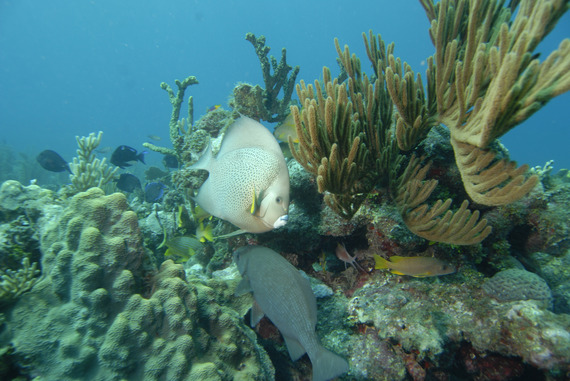 3am... Rise and shine! Time for a quick shower then down to the hotel lobby for our six-hour bus trip to Júcaro. Located in Cuba's Ciégo de Avila province, Júcaro is a small fishing town on Cuba's remote southern coast. From Júcaro it's another five hours by boat to my ultimate destination: Jardines de la Reina National Park. Known in English as Gardens of the Queen, it is the largest marine protected area in the Caribbean. Jardines and the Gulf of Ana María, the large body of water to its north are the focus of a research effort between my project Cuba Marine Research and Conservation Program, Centro de Investigaciones Marinas (Center for Marine Research)[CIM] of the University of Havana and Woods Hole Oceanographic Institute (WHOI). CIM is one of the preeminent science institutions in Cuba as evidenced by the fact that every marine scientist in Cuba is trained and educated at CIM. Its director is a young coral scientist named Patricia Gonzalez whose passion for coral reefs is unrivaled.

Since 1998 I have worked alongside Cuban marine scientists to study marine resources shared by our countries. Through a new research effort called Proyecto Tres Golfos (P3G) we are trying to understand how marine organisms between Cuba's three largest bodies of water, the gulfs of Batabanó, Ana María and Guanahacabibes, are related. We also hope to determine why coral is faring better in Cuban waters than the rest of the Caribbean. Data from our three research cruises is also helping us study the relationships between coral reefs in the U.S. and Florida, which share many of the same species as a result of the Gulf Stream, a powerful oceanic current that transports organisms between our countries.

We finally arrive in Júcaro and meet our research vessel, a liveaboard dive boat called La Reina. Cuba's southern coast has always been sparsely populated. Some say it's because most hurricanes that strike Cuba tend to come from the south. Others claim the southern coast is too swampy for human habitation and a lack of deep harbors made it difficult for earlier settlements to take hold. Júcaro is all of the above. Covered in mangroves and low lying, it lives off fishing and the presence of Avalon Dive Center. Avalon has an agreement with the Cuban government that limits the number of divers and anglers who can use the park to ensure that the reef community remains healthy.

Aboard La Reina, we steam toward the Gardens of the Queen. CMRC scientist Dr. Daria Siciliano and I are interested in determining how coral reefs are changing due to human factors such as land based runoff and warmer, more acidic oceans. It is painstaking work. With our CIM colleagues we move underwater along transects and measure reef cover along 10 meter transects. We look at how much of the coral is bleaching or diseased or how much is covered in algae, which can choke out corals. The more healthy coral covering the reef, the healthier the ecosystem is. In places like the Florida Keys, algae have taken over due to excess nutrients from fertilizers used for agriculture or urban landscaping. Corals thrive in nutrient low systems so when too much nitrogen or phosphorous flow from land, it allows algae to thrive at the expense of coral. Since coral provides the food and habitat needed for organisms to survive it is important to measure coral health and determine if management efforts are effective.
We make it to the Jardines key chains and enjoy some well-deserved sleep.

Our first two days are comfortable and we complete dozens of coral health surveys. Day three brings heavy northerly winds and surge. After completing one habitat survey we try for a second but working here feels like being in a washing machine. Up and down, left and right, we slam into fire coral or the sea floor. Just before we were about to give up Daria spots an enormous patch of elkhorn coral just beyond the wave breaks. Elkhorn is type of coral that was once abundant in the Florida Keys but is now increasingly rare. The coral is majestic with its bright orange branches reaching up toward the surface as if trying to tough the sunlight with extended fingers. These corals are considered reef-building corals because they have hard skeletons and live in some of the hardest conditions, providing a substrate for other corals and reef organisms. In Florida, diseases such as white pox, which is spread through human waste, affect Elkhorn coral. But in places like Jardines, Elkhorn coral abounds, most likely due to lack of exposure from runoff.

Our work is looking both at the present and the past to help predict the future of Cuban corals. We have another mission which is to extract cores of corals to look for important historical clues as to what conditions were like in Jardines de la Reina before agriculture and tourism could impact the reef.

We steam further into the Gulf of Ana Maria to Cayo Algodón Grande. Here we find some huge coral heads, perfect for drilling cores. Some coral heads are four or five feet tall and others reach within inches from the surface. Victor Ferrer, CIM's young coral scientist, estimates the coral cover here at around 50%, which is quite high considering the average cover in the Caribbean is around 15%.

On the last day of our cruise at Algodón Grande, we identify a Siderastrea coral that is perfect for coring. It is large, deep and spherical. My colleagues Konrad Hughen and Justin Ossolinski, both based at WHOI, are experts at removing coral cores. In fact, the longest coral Konrad ever took was four meters long from a reef in the Red Sea. We strap on our BCs and get into the water with all the heavy equipment required to take our core. Our work is a bit like a surgery. Konrad would make hand signals to Justin to add more bits to lengthen the drill or tell me to tell the boat captain to change the air tank once the drill was losing strength. We made great progress, removing a foot or two within ten minutes. 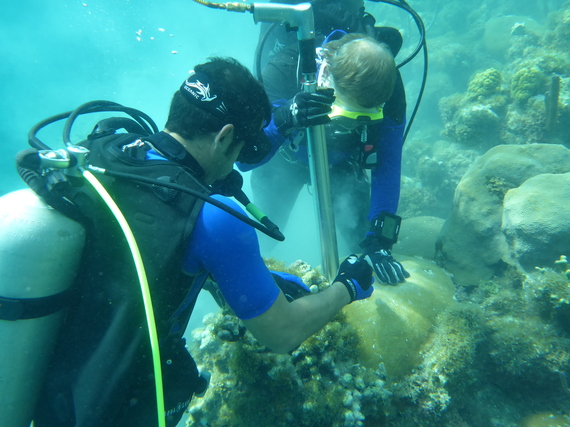 We continue to drill feverishly, stopping every few minutes to remove the drill bit or add another extension. We spend 20 minutes working the last section of core before we raise the drill bit one more time. Sitting inside the bit is one foot-long section of core followed by another. My first ever-underwater high five! We had the entire length of the coral and could now plug the hole and return to the surface. Konrad placed a concrete plug on the hole and hammered it gently. I asked him how these large corals cope when being drilled into. He assures me that after a year, the coral grows back over the plug leaving no evidence. Once on board we put our core together end on end. It measures 1.2 meters (almost four feet) and looking at the growth rings we estimated a growth rate of 0.7mm per year, meaning our coral is at least two centuries old.

This core's chemical signature will be measured and we can determine what factors influence its health. We can also study climate patterns over time, which can help us, determine how Cuba's corals might cope with higher temperatures and acidity, which is threatening reefs all over the world.

Our week-long cruise to Jardines was a huge success. Ahead of us are months of analysis to continue to get an idea of why they are healthier than ours in the U.S.. Back home, Daria drills the coral core in two in order to take an x-ray. Looking closely at the growth rings, she determines that the growth rate of this coral is more like 0.4 cm per year, meaning this coral emerged as a young polyp on the sea floor almost 300 years ago, around the same time George Washington was born.

In spite of the embargo against Cuba, our work is proving that our countries have a lot to learn from each other. Through science diplomacy, seemingly impenetrable barriers can be overcome though face-to-face engagement and the yearning to solve problems that face both countries. After all, Cuba is only 90 miles away.