I was six years old when I went to see Star Wars with my father and my older siblings. My mother didn't join us. I think she was taking care of my younger sister who had been born that year and even at my young age, I kind of sensed that my father had been tasked with "getting us out of the house."

Going to see Star Wars was a good idea and we quickly became a Star Wars family. My parents bought the John Williams soundtrack - on a double LP in a sleeve that had stills from the film - and I would listen to it all the time, looking at the pictures and dreaming of getting off Tatooine with Luke and Leia. We had all the action figures as well. Action figures that would one day be worth way more than we ever could have imagined. We had the playsets - the Death Star, the X-Wing fighter whose wings would spring open with the touch of a button. And costumes. My brothers dressed up as Han and Luke. They made light sabers from paper towel tubes. And then we got the real ones. Plastic, light up sabers that bent within hours of getting them.

It seems like it really was a long time ago in a galaxy far, far away. At least far from where I am now. I was six years old. I think of that now when I hear worried mothers fretting over taking their 9 year olds to the new film. Sometimes I wonder what my parents were even thinking. But my memories of Star Wars and the subsequent films are very different than those of my kids. For starters, we thought those graphics were awesome! Back when I was educating them in the ways of the force, I warned them about the scary parts. Sat near them in case they freaked out. Like that scene in Empire Strikes Back when Luke wanders into a cave on Dagobah and faces Darth Vader. That scared the crap out of me when I was a kid. My son, watching the same scene, looked over at me and laughed. "Yeah mom. REALLY scary." 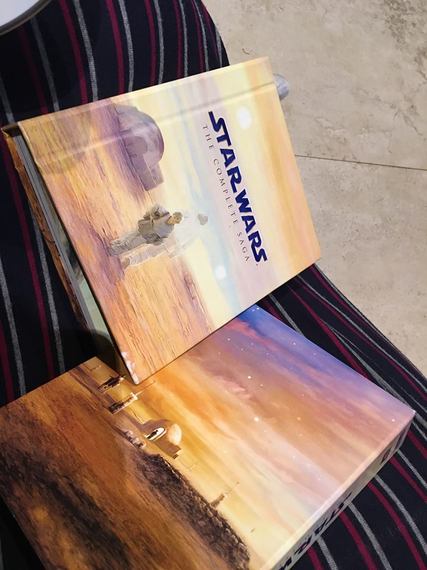 With this new episode coming out, the stakes are high. I'm not just talking about the franchise here. When the first three episodes came out, there wasn't as much at stake. It was backstory. My childhood characters were safe back in the 70s and I could line up with the rest of the world and criticize the prequels as not being real. Not part of the "real" movies.

But now, the original cast is back and I'm a little concerned. I remember what it was like when Indiana Jones and the Kingdom of the Crystal Skull came out and I had to reconcile an older, grayer, and significantly slower Indy. Chewbacca and the droids might not have aged, but the Princess and Han are definitely not where I left them 36 years ago. And even though I haven't seen Luke in the trailers, I know he's there. Older. Wiser. Darker, maybe. I'm thinking Darth Vader darker.

As worried as I am, I still have my tickets ready. I'm where my parents were 36 years ago and I'm taking my kids to watch their first Star Wars movie in a theater. While I'm going back 30 some-odd years, they're just getting launched. I have high hopes, though. Because even though I've aged with the characters, in some ways, I think it will be more like what Han says in the trailer. It will be like coming home.