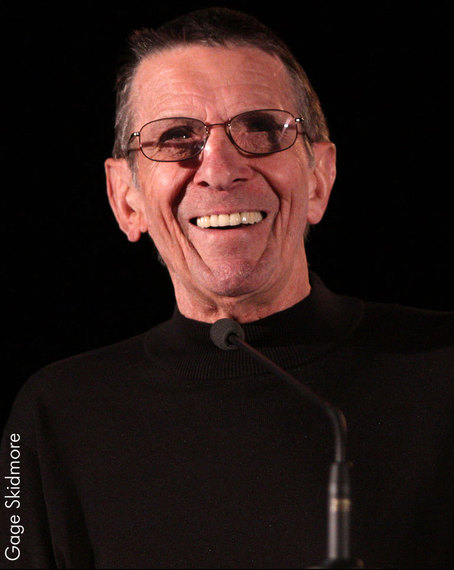 I have recently made the acquaintance of David Birnbaum, the intellectual entrepreneur and freelance philosopher. Birnbaum is the architect and author of the Summa Metaphysica series, a groundbreaking project devoted to the pursuit of an overarching metaphysics. Summa Metaphysica proposes a comprehensive and integrated metaphysical structure; a wholly original and powerful new paradigm. Upon hearing the news that Leonard Nimoy died, Birnbaum emailed me that he felt a spiritual kinship with him.

Intrigued, we started a conversation on this compelling topic, which I've edited into a Q & A, below.

Q: Since childhood, I have been a fan of Star Trek (the original series, which began in 1966) and a devotee of Leonard Nimoy's iconic character, Mr. Spock, the uber-logical Vulcan. I always felt that Star Trek's cosmology transcended much of pop culture's offerings and I intuited a strong spiritual element in Mr. Spock...despite his avowed love of logic. I know that you are a big fan as well. I have also had the great privilege of meeting and speaking with Nimoy on two occasions through my work with the now-defunct National Foundation for Jewish Culture and was impressed by his menschlichkeit.

Where does Nimoy's concept of the universe intersect with your proposed infinite Quest for Potential concept?

A: If I can take the liberty of combining the core mantras of Star Trek and Star Wars, we end up with the following hybrid mantra: May the force be with you/Boldly go where no man has gone before.

This hybrid mantra would directly parallel the underlying motif of my Potentialism Theory: Advance and advance inexorably. This imperative applies on all levels -- cosmos-wise, universe-wise and individual-wise.

Q: Okay, so let me just point out that you very creatively merged two distinct cultural products - Star Trek and Star Wars -- and Nimoy is connected only to the former. Then again, it is your prerogative to fashion a hybrid cosmic mantra. So can we talk a bit more about your Potentialism Theory in the context of Star Trek?

A: My Potentialism Theory hypothesizes that there is one eternal metaphysical dynamic underlying and overarching the entire Cosmic Order -- Quest for Potential -- or Q4P for short.

And what is the cosmic imperative underlying this eternal and all-embracing Force? To inexorably advance towards greater and greater sophistication and wondrousness; this very directly parallels the Star Trek mantra of pressing to the limits of the frontier.

Q: Can you show your theory in action?

A: Start with the Big Bang 13.8 billion years ago and end up with our ever-expanding wondrous universe in 2015. Our knowledge of two inter-related fields -- the history of the cosmic order and the progression of life -- has undergone a quantum jump in the last 150 years; one can now connect the dots in either of these fields and discern the same one clear conceptual trajectory. This is a trajectory -- over the span of billions of years -- of the ever-iterating Quest for Potential -- starting with that which is very obscure and heading inexorably towards the increasingly complex, sophisticated and wondrous.

Q: And where do you believe this trajectory is headed?

A: It is headed inexorably towards what I label as the super-Extraordinary, or E+ for short.

In symbolic form, my concise SuperLaw to crack-the-cosmic code would therefore be Q4P > E+. Quest for Potential drives the universe onward and on-track towards the super-Extraordinary.

At the April 2012 four-day international academic conference at Bard College on Summa Metaphysica, several hundred T-shirts were distributed with the Q4P∞ > E+ SuperLaw.

Q: Can you bring this discussion down to earth, laying out some of the evidence of your theory?

A: Yes, for sure, my Q4P > E+ trajectory is increasingly obvious once you have been alerted to it.

First, in the life sciences, we now can see the trajectory from the atom to molecules to single celled organisms to multi-celled organisms to photosynthesis and plants; then as we continue to advance forward, we move into the (more complex) Animal Kingdom then onto (even more complex) humans -- with ever great and wider complexity/sophistication/wondrousness, freedom of action, brainpower, emotional array and indeed, consciousness.

Of course these humans will one day -- perhaps in the 23rd century -- possibly build the Starship Enterprise -- with Mr. Spock on the Command Deck -- and, indeed, go boldly where no man has gone. Thus, one straight trajectory spanning billions of years. Advance, inexorable and hopefully infinite. Ever onward, ever forward.

Laying out the Q4P > E+ trajectory on a more macro level vis à vis the History of the Cosmos, we now know that the trajectory post-Big Bang is very roughly as-follows: from Big Bang point > Stars > Galaxies and Solar Systems > Earth > Life on Earth > ever-increasing consciousness and "smarts" -- a trajectory which then dovetails into the life sciences trajectory just delineated above.

My SuperLaw relates to Einstein's iconic formula E = mc2 in the following way: It wraps-around Einstein's physics equation -- and clearly dovetails with his iconic aphorism -- "God does not play dice with the universe." The universe is not random; it is directional.

Q: I'm glad we are back to God, something I am more comfortable speaking about. In 1988, in Summa Metaphysica I (Ktav Publishing) you introduced your concept of the Cosmic Womb of Potential; both Leonard Nimoy and you apparently have a neo-feminine God Force as part of your worldview. Can you address where you think you connect with his Shekhina concept?

A: On a personal level both Leonard Nimoy and I anchor our lives in Jewish mesorah -- or tradition. One can readily say that this adds a rich and fulfilling spiritual/religious dimension -- aside from anchoring each of us in unique Jewish history -- and, perhaps, destiny.

As well, Nimoy was passionate about the masoretic concept of the neo-feminine Shekhina (God-Presence) permeating out lives. Remember, classic secular Aristotelianism and classic Maimonidean Judaism both place God "there" and us "here"; however there are strains in Judaism -- like that of Baal Shem Tov Hasidism which place God all around us. Thus, the Shekhina -- God-Presence in our midst theme. On a personal spiritual/religious level, I am in basic accord with the concept.

As a writer of metaphysics however, I like my formulations lean and mean and not hostage to any deity or religious tradition. In other words, within all three volumes of Summa Metaphysica, I like my theory anchored in hard, pure, bulletproof logic. Period.

And just where have we heard this insistent "It is logical" mantra before? Yes, from Nimoy's alter-ego -- Mr. Spock himself. Mr. Logical. Logic is eternal, of course, and not vulnerable to the vicissitudes of time, historical memory, academic fashion, and political correctness.

Q: Logic aside, is there a neo-feminine dimension to all this?

A: In both Eastern tradition -- and strains of Kabbalistic tradition -- the Creator, which is the fount of fertility and birth -- has, almost by definition, a strong feminine dimension. This neo-feminine dimension includes, but is not limited to, quest for ultimate fulfillment, creativity -- and, indeed, creation. In my schema, my hypothesized neo-feminine foundational Cosmic Womb of Potential both "births" the Cosmic Order and guides inter-related Quest for Potential (Q4P) to optimize the Cosmic Order.

Q: But Nimoy took the concept much further and into the salacious.

A: Respectfully, the great Nimoy erred here in extrapolating a metaphysical, neo-feminine Divine into a sexual/sensual Divine. The Divine is metaphysical. The whole sexuality/sensuality cluster is a construct for physical realms and inapplicable to the abstract metaphysical world (of the Divine). One should not extrapolate neo-feminine Creator into a sexual/sensual female Creator. But Nimoy is not alone in his detour. A highly sexual deity is intrinsic to other tradition strains, particularly in the Far East.

Q: From your perspective, if we conflate Leonard Nimoy the man and Mr. Spock the iconic space explorer, what is his legacy?

A: Nimoy leaves an extraordinary legacy of a man grounded in tradition, spirituality and service in his personal life; he connected not only to the world, and not only to America, which he loved, but walked the walk in service to the Jewish people. Onstage and screen, Nimoy leaves an extraordinary legacy of a bold and brilliant cutting-edge explorer of unimpeachable integrity. His inner conviction is manifest. En toto, a man for all seasons, for sure. May his memory be blessed.

Q: So, now that the narrative of his life on earth has ended, do you think that Nimoy/Spock has fulfilled his Vulcan blessing -- Live long and prosper?