Ever wonder how museum exhibitions come to be? All those well-chosen works, from museums and private collections all over the world?

The Museum of Fine Arts, Boston (MFA), is host to a phenomenal exhibition of 17th-century Dutch paintings depicting the wealthy, the working class, and the places where the classes connect.

The exhibition, "Class Distinctions: Dutch Painting in the Age of Rembrandt and Vermeer," runs through January 18, 2016.

Ronni Baer, the MFA's William and Ann Elfers Senior Curator of European Paintings, knighted by the King of Spain for her 2008 "El Greco to Velázquez" exhibition, took a few moments last week to explain how the whole thing coalesced. 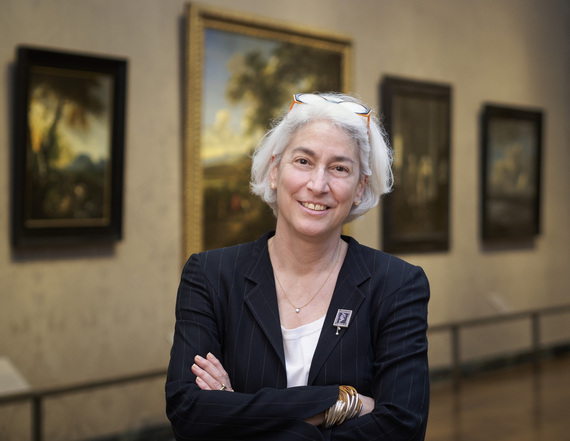 Michael Levin: What's the process of getting a major exhibition approved by an institution like the Museum of Fine Arts?

Ronni Baer: First you come up with a thesis and some images, and then you present it to the director and a committee for approval.

Michael: What was your vision for the show?

Michael: How long does the process take?

Ronni: I spent two and a half years assembling the loans. I've been an historian of Dutch art for a long time, so I know the collections where Dutch art is strong, and I know the major works by the major artists -- although some of it is serendipity. For the catalogue, I worked with a team of Dutch scholars, including specialists in history, social history, costume, the marketplace, and linen.

I was conscious that the exhibition needed to be historically accurate, that I couldn't impose a 21st-century view of class onto 17th-century Dutch society. But in the end, it's really not so different than how we think of class today. It was immediately apparent that I needed a section about where the classes meet, and that would be the culmination of the exhibition.
Then I could start deciding what paintings would best represent each particular part of each particular class. So you're shuffling and you're negotiating. After you've assembled a core group of paintings, you're filling in what you think would work best.

Michael: How hard is it to get a museum to lend great works?

Ronni: I've been doing this for a long time, and I have colleagues all over the world. I know them well. They know my work well. I used to work at the National Gallery of Art. The curator of Dutch and Flemish painting there is one of my mentors. I asked him very early on for the loan of the paintings I needed from them, and he was very generous. As was the Surveyor of the Queen's Pictures at Buckingham Palace. Also, the MFA has a great collection, and we are very generous lenders. That helps a lot in loan negotiations.

Michael: How do you determine what to ask for?

Ronni: I do it by putting a notebook together, and the notebook has the armature of the organization of the exhibition. Each painting in my notebook is placed as I envision its role in the exhibition. Of course now it's an iPad, but it was color Xeroxes in a notebook. I go to the curators at all of these institutions and I show them what I'm doing and why I need their particular painting.

Michael: It must be quite a jump from envisioning the exhibition to unpacking the paintings and putting them on the walls.

Ronni: It is dreamlike when we start opening the crates. When the paintings actually arrive and we unpack them, they have size, they have scale, and they have paint of varying thickness on the canvas or panel. It's an amazing feeling.

We have loans coming from more than 40 different collectors and the arrivals were spread out over a two-week period. We've been working with a layout on paper, but that's to make sure everything will fit in the gallery. It doesn't indicate the final place where everything will be, because that's the key curatorial elixir. That's the moment of creativity where you're juxtaposing things and you're featuring things in a certain way. And that you can't do on paper. At least, I can't do it on paper.

Michael: What kind of team do you work with?

Ronni: I've had two amazing research fellows. The first one was with me during the inception and negotiation period, and she came up with an amazing database and started filling files. It's an exhibition and it's a book, and they're related, but they're not the same. I wanted to contribute to scholarship. It would have been great to say, "I'm going to do a masterpieces of Dutch painting show." But you can't get loans that way. You can't pretend to do a whole survey of Dutch painting. So if you don't have a real reason for asking for these masterpieces, it's less likely you're going to get them.

My research fellow would fill a file full of research material about every painting that was coming, and I had other files for correspondence with all of the lenders.

Michael: How do you find paintings from private collectors?

Ronni: I've worked with a lot of them. When you're in the field, you know who collects in your area of expertise (or know who to contact to find out who owns a certain painting).

Michael: Do you travel to look for the right paintings?

Ronni: I went all over Europe and North America, talking to curators, explaining my thesis, asking for their commitment for loan even though working five years in advance throws some people off.

Michael: I think you have the best job in the world.

Ronni: I think I do, actually. I was a French literature major at Emory University. I spent my junior year in Paris, and I took my first course called "Learn the Louvre," and I followed a woman around the Louvre every week. She told stories in front of paintings, and I was like, you can make a living doing this? This is what I want to do.

Michael: What are people in the museum world saying about the show?

Ronni: It's gratifying to see colleagues from all over come in and say they've never seen a show like this. It's important to me that the he public loves it, but it means a lot that my colleagues do, too. You work on something like this for so long -- essentially in solitude or in your head --
and then when you see the three-dimensional realization of it, the whole thing is pretty remarkable. We have the most amazing graphic designer and a wonderful installation designer, and lots of people working behind the scenes to make this a success. In the end, the fact that you can walk into a room that you had in your head and see it realized is pretty extraordinary.

Michael: Will the exhibition travel?

Ronni: Yes, it's going to Kansas City. That's it. People don't want their paintings gone for too long.

Michael: Or their children.

Ronni: That depends on whom you ask.