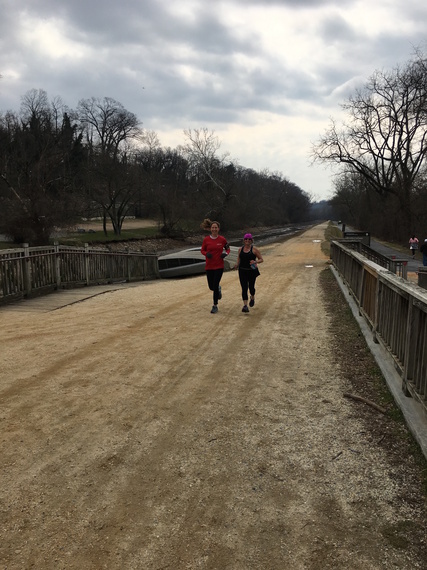 If you looked at my exercise calendar you would think I was training to take home a medal or using method acting to play the role of an elite athlete.

Last year, when I ran the Rock 'n Roll Brooklyn Half Marathon, I stopped at mile 12 to pose for a picture with Harriett Thompson, who holds the record for the oldest person to finish a marathon.

"I hope I didn't affect your time too much," Thompson said as I jogged back to the race course.

Even this easygoing 93-year-old concert pianist gets the value in being competitive.

So what's with the training calendar?

In the middle of last week my upcoming work trip overseas got canceled. Since I was supposed to be traveling on Saturday and resting on Sunday, I hadn't penciled in a run until mid week.

Hmm, I thought, I can go for a run this weekend.

My go-to, No. 1 choice would be the joyful run, the transformational run, the one that clears my head. In other words, a sanity run.

But like Micki Hultquist, my running partner, it's taken me many training runs to get to a place where I am using "sanity" and "run" in the same sentence.

"Now I enjoy the social aspects of running," said Micki, a foodie who's lifelong goal is to maintain a healthy lifestyle.

Micki does her long runs on Saturdays and her shorter but always social runs with me on Sundays.

Sanity runs aside it's insane how many different runs there are to consider as you progress no matter what your fitness goals are.

That's because your body will adapt to any workout, according to Jeff Gaudette, running coach and founder of RunnersConnect, an online community of more than 600 runners, coaches, and fitness and health experts.

I caught Jeff on the phone while he was at the airport waiting to catch his flight home after the RunnersConnect weekend retreat outside Charlotte, North Carolina, where recreational runners spent three days together running and talking about running.

"If you do the same type of workout all the time your body is going to adapt to that workout."

New runners might think that sounds like a plan. When I first took up running and was struggling to finish a single mile, my cousin, an endurance runner, told me if I could just get to three miles, I would be okay.

Because although doing the same workout might train you to get better at that workout, i.e., running a mile, Jeff said, it won't necessarily make you a better overall runner or overall athlete or make you fitter.

Which is, after all, the point.

A side payoff is having a run in your back pocket to pull out when you need a lift in your spirits, an excuse to listen to music, discover a new city, or spend time with a person you want to date or your partner or spouse who might happen to be a runner.

Still, how do you get there?

If you're not naturally athletic, pushing yourself to where discomfort becomes your stimulus can be both physically and mentally challenging. Changing up your runs can help you do that, Jeff said.

It worked for me.

My sanity run? My cousin was right. Now, it's five miles.

There is great information out there on this topic. To make things simple, I asked Jeff about the different types of runs and when you might want to put them into your training schedule in order to progress both your running and your level of fitness.

You may feel like you're just putting miles on your feet, but easy runs, in short little waves, allow you to get fitter aerobically. This is important because of the body's three energy systems, it's the aerobic energy system that we use for marathon, half marathon, 10k, and even 5k races. Even if you're not particularly competitive but have a personality like mine and seek out a race environment, you'll want to improve your aerobic capacity so racing can become more enjoyable.

Easy runs also increase your endurance in general and help you recover from races or strenuous workouts. And then, as an added perk, there are the long-term health benefits of cardiovascular exercise.

For these runs you want your pace to be easy for the entire run, meaning you are not breathing hard and you should be able to be conversational. The distance for your easy run is going to depend on how long you've been running or your overall weekly mileage and can vary from three to 10 miles.

Also known as a threshold run, a tempo run teaches your body how to reconvert lactic acid back to usable energy, or in other words, switch from anaerobic energy to aerobic energy. I haven't progressed to tempo runs yet, but according to Jeff, for most people who do them, tempo runs are between two to five miles at roughly your half-marathon race pace the entire time. He said a one-mile warm up and a one-mile cool down is in addition to your tempo run mileage.

Some runners break up their tempo runs into one-mile repeats. That means you're doing one mile at a time at your tempo pace but resting for 60 seconds in between. I've just started to incorporate repeats into my training, but I do them according to effort rather than pace.

The purpose of speed runs is to increase your efficiency when you run and to improve your running mechanics so race day feels easier.

Another good way to incorporate speed workouts into your calendar is to add strides, maybe near the end of your easy runs or even during your intervals. A typical stride is 100 meters - or the straightaway on a track before the curve - and you do them with the effort of about a nine. Strides simulate what many runners do at the end of any race - sprint across the finish with a burst of energy when they're already exhausted.

For runners who aren't able to control the variables, for example, if you don't live near a track or if you're running on a hilly road, and need to use time instead of distance for speed workouts, fartleks and timed runs are a good option.

When speed workouts, including strides and repeats in addition to intervals, show up on my calendar, I dread them. These are hard workouts and often painful. But they also give me an enormous sense of accomplishment. So there's that.

And, if calorie burn is important to you, as it is to me, there is scientific evidence that High Intensity Interval Training (HIIT) workouts can have weight-loss benefits.

The purpose of doing long runs is to build your endurance, both in terms of your aerobic capacity and in your ability to stay on your feet for a longer period of time.

There are a few different types of long runs. The most popular, done at an easy pace, is known as a Long Slow Distance (LSD) run, or you could do a long run with a fast finish. If you're training for a marathon, it's popular to incorporate surges, or mini speed workouts in the middle of a long run, which help you learn to run fast when you're fatigued.

More:
healthy livingFitness and Exerciseexerciserunningrunning tips
Newsletter Sign Up
The Morning Email
Wake up to the day's most important news.
Successfully Subscribed!
Realness delivered to your inbox