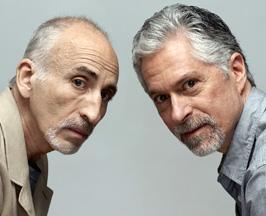 Therapists Barry Michels and Phil Stutz are creators of "the Tools," a set of practices to help you move past self-limiting behaviors and transform challenges into opportunities. Here's how the Tools can help with that part of you--often referred to as the saboteur, the shadow, or your inner enemy--that Michels and Stutz call Part X.

Omega: You describe how people can use the Tools to do battle with Part X, also known as their inner enemy. Does there come a time in using the Tools where it feels less like a battle and more peaceful?

Phil: I have a saying that peace is an active state of mind. We're trying to combine the sense of peace with the necessity for constant work. Peace was often defined as something languid and laid back, a state where you can fold your tent up, stop making an effort, and stop being vigilant. That's not what peace is.

The only infinite thing about a human being is their ability to keep on struggling with no end point. If you're willing to do that, you've tapped into an infinite part of yourself that can then connect to the infinite forces in the universe, and that is peace. As far as I'm concerned that's the only peace. That's why I say peace is an active state of mind.

Omega: How can you be sure Part X hasn't taken over the Tools and is using them for its own end, like posing as your Inner Authority?

Barry: Part X doesn't want you to use tools at all. Its first strategy is to get you to forget them entirely. In my case, I was always amazed at how I could work all day with patients, exhorting them to use the tools, and then somehow "forget" to use them when I went home at night.

Once you come up with ways to remind yourself to use the tools, Part X still discourages you from using them. When you use them and you get a good outcome, it suggests you no longer need them. When you experience a failure or setback, it tells you they didn't "work," so there's no point in using them.

If all else fails, it likes to pose as a powerful inner authority who knows you better than you know yourself. If you study it carefully, you'll notice it uses a harsh, finger-pointing, punitive, judgmental tone. When we work with people, we try to shift that tone to one that is supportive of every effort you make -- whether you succeed or fail.

Phil: If the voice inside you is telling you to quit, it's almost definitely Part X. It's either going to tell you that you don't need to do it anymore, that you've got this solved, or you don't have to make anymore effort because you or the situation is hopeless and helpless, so why bother.

Omega: Is it easy to learn how to use the Tools if you're not used to being self-reflective or self-aware?

Phil: I try to focus on what someone wants to change and just bang on that over and over again. I try to give as little theory as I can and instead give them tasks that include what I like to call student study -- I ask them to study themselves. I also get people to draw pictures. When I ask people to draw a picture of Part X, no one has ever said, "What the hell is that?"

Omega: What's the biggest thing to watch out for with Part X?

Phil: There seem to be three basic rules in the universe: part of life is pain; part of life is uncertainty; and part of life is endless work. And none of these ever go away. What we see in almost everyone is the idea of a realm of illusion where you will be exonerated, or exempt from these three rules of the universe. I call this the "snapshot realm," because we have a picture of this perfect place in our mind, but this place doesn't exist. Part X wants you to believe that this illusory realm is real, and once it does it can pretty much have its way with you because it's making you a false promise.

Barry: An example of the realm of illusion might be romantic relationships. Most young people go into romantic relationships expecting to walk hand-in-hand into the sunset with the music swelling. People expect this moment to last forever. But that's Part X's demonic way of inflating someone's expectations to a point where they will inevitably be crushed. It's like commercials for exercise equipment that tell you you're going to lose weight just by buying a treadmill but don't mention that you're going to have to get yourself to use the treadmill. The Tools will get you to use the treadmill.

Explore more in the category of Body Mind Spirit.

More:
healthy living toolssoulinspirationpsychology
Newsletter Sign Up
The essential guide to taking care of your mind and body
Subscribe to HuffPost’s wellness email
Successfully Subscribed!
Wellness delivered to your inbox