Resolutions, schmezolutions. Call me a not-so-happy-New Year-camper. Okay, so I buy into the basic ABC's of Anderson Cooper, the Ball drop, and Confetti. And yes, it is a time for new beginnings, but I say spontaneity is as grand as planning.

After all, as a proponent of humor, I say (with all seriousness), let's add some turquoise to the beige of life. Let's all let down our hair, let up on rigid expectations, and let go of the norm. Let's hear it for the Zigzag, which is so much more exhilarating than the straight and narrow. The solid line just might be overrated. How about the dotted line, the diagonal and the curve?

Pondering the paths we're all considering over the next 12 months, I'm suggesting we think a tad out of the cardboard box. Instead, think leather, corduroy or satin. No matter your major, your job, your journey, or your horoscope sign, I'm just saying, "Take a chance." Regardless of your location in life -- whether a dorm room or a boardroom -- I'm opting for some wiggle room.

Now I'm not saying don't start that new all-kale-all-the-time diet. Or that trendy Paleo workout or a brand new Pilates regime. What I am saying is: Listen to your inner i-tune. Take a risk. Go out on a lively, lovely limb.

That might mean getting up in the morning and doing exactly what you want as of that minute. Head east at dawn and watch a sunrise. Go find a mountain and hike it. Fight off the Holly Golightly "mean reds," transform those midnight blues into the stunning cobalt blues of dusk. Go all out and initiate a chat with that redhead in the gym. Get crazy and switch from Apple to Samsung. Don't just store your photos in the iCloud; go photograph the actual clouds. Find a patch of sky and discover the wispy wonders of cumulus and nimbus.

Be inventive. Pursue your unbridled passion.

As for mine? An aspiring comedienne, I've decided to connect the dots toward my dream, reach out to my mentors. So, in honor of my "do something outrageous" kick, I recently brought a birthday gift to Woody Allen. He was pleasantly surprised and took a selfie with me. Then I called up Larry David to invite him onto my radio show. 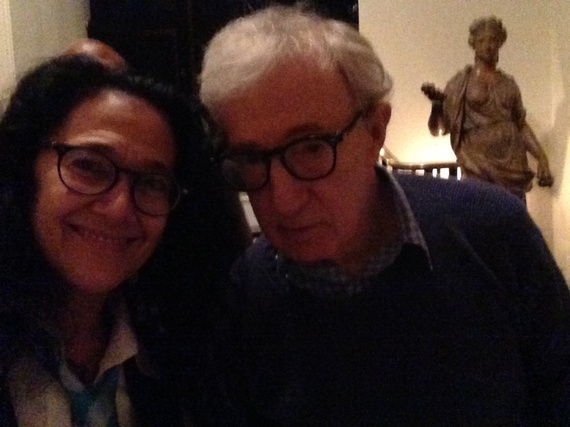 After all, what's the worst that could happen? He declined, but said he admired my chutzpah! Could I be cast as the next Annie Hall or perhaps in a sequel to Curb Your Enthusiasm? Who knows. But I do know that risk-taking radiates positive ions. Don't forget to sprinkle in a touch of humor.

Meanwhile, as we're all following our non-strategized bliss, I've assembled my Top 10 wild and crazy resolutions for a swerve, curvy, nervy 2015: 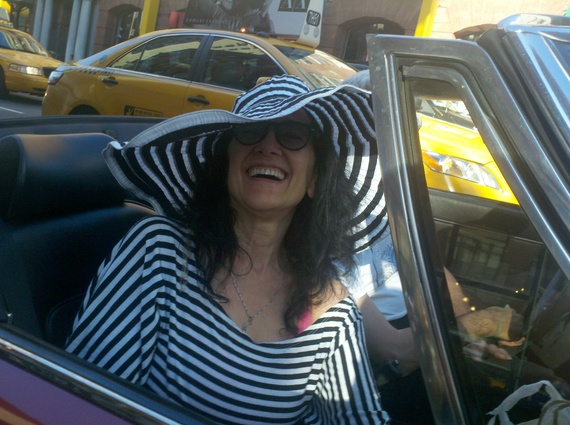 2) Find someone, anyone, to say that George Clooney is Rosemary Clooney's nephew.

3) Create a spin-off of Seinfeld's Comedians in Cars Getting Coffee: Become the
new host of www.Comedians in Bars Sipping Cocktails.com

4) Partner with Bailey's to create an Irish cream that would make people behave
more like George Bailey, care more about humanity and less
about alcohol.

5) Write a duet for Taylor Swift and Tony Bennett with a Martha Stewart backdrop.
Call it BAKE IT OFF.

6) Start a campaign to have CNN's Anthony Bourdain take a hiatus from food, and
become a judge on Dancing with the Stars.

8) Get Anderson Cooper and Kathy Griffin to hand over one New Year's Eve baton to Larry David and Dana Perino.

9) Partner with Netflix to develop a reality show based on The Voice called The Bully. Then vote off the worst ones -- and see how THEY feel.

10) Ask Woody Allen to give me back the Sharpie I loaned one of his fans for an
autograph. And then make sure he knows my name is Mia.

But truly -- my ultimate resolution for 2015? To have no more resolutions.