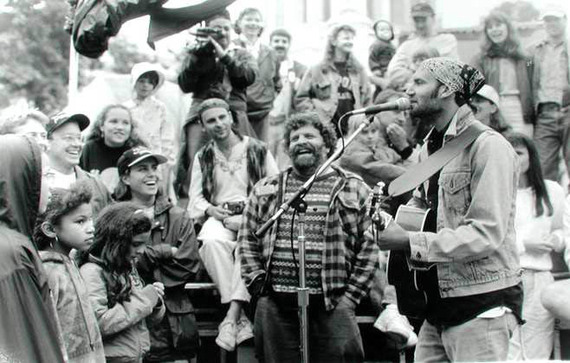 That's the name everybody calls me, everyone with the exception of my mom, who will, in moments of extreme tenderness, use my "other" name. There are also certain rabbis who feel more comfortable using my other name, my more essential name. That other name is the one by which I am called up to the Torah. It is also the name that will one day be carved on my tombstone: Pesach Mordechai Ben Bloomah V' Daveed.

Pesach is a strange name by any account. It's Hebrew to be sure, but as an Israeli name it would sound as strange to the average Tel Aviv dweller's ears as the improbable English names, Easter or Lent. As most Hebrew words do, Pesach means several things. It's best known as the Hebraized name for the holiday of Passover. It also has a poetical meaning, one which I aspire to, He who leaps from the mundane to the sublime. The meaning that I'm most connected to however is this: The mouth that speaks.

I am by nature a garrulous, loquacious, endless talker. Speaking is the way I connect with the universe, it is the way I convince myself that I am other than what I feel; which is, tragically, existentially alone on a planet that spins in the darkness of space. My words are the thing about me that is most real, second only to air and water and sex. They are to me, my most precious means of staying alive.

I talk about what I see and perhaps, more often, about what can't be seen. Therefore, I'm in a constant, and fruitless struggle to assemble a string of words that define the unknowable, the unbridgeable. I like to use too-big words and I like to let them emerge with great deliberation. I love to swear (out of earshot of my wife and children of course) and there is no one who can speak with more horrid crassness than I. I like small words too, the ones I've used since I was a child; but since they frighten me I only dare think them, never say them. "I need you, I love you, I'm angry with you... Please come back."

Some words are merely a means of keeping my thoughts and feelings private. I call them cloaking terms. They are more walls than words and they comprise sports talk, weather talk, gossip, and any kind shallow talk that can serve as a buffer rather than a connector. I need them to get through a day of course, but I wonder if by using cloaking terms too often, I sometimes forget that there are other, better ways of talking.

I speak words of prayer every day. I do this three, and sometimes four times a day as part of my observance of Jewish ritual. Then, there are my own personal prayers, ones I say many days, on the hour, every hour. They are words I keep for God and I trust they are heard, but nonetheless, I will continue speaking them because they keep me always in touch with a great mystery. There are of course, mundane words: "Please pass the salt," "Can you get here by five?" "Is there room for another person in the car?" They are technical and essential.

One morning, about half a year ago, I decided to make a short video of myself speaking into my iPhone and posting it online. I was uncomfortable doing this and so I used cloaking terms. I talked about the Mayweather/Pacaquio fight. When I posted the video and started getting some responses, I wondered if I had the nerve to share other kinds of words. I found I not only had the nerve, but that I had a passion for it. The increasing number of responses led to the videos becoming a full-blown ritual. For almost six months, starting in the spring of 2015, I woke up early and recorded myself speaking. I did this without fail, every morning for nearly half a year. (In fact it was six days a week since, like the Big Lebowski, I don't use technology on the Jewish Sabbath).

It was a profusion of words to be sure. I spoke about animal rights, I spoke about child-raising, I spoke about marriage, about aging, about God, about death, about purpose, and mostly, I spoke about the strange paradox of simply... being. These short films did not however, preclude all the other speaking that I do on a daily basis, the endless business phone calls, the discussions with my wife, my children, my mother, my friends -- and all the words that I sing in my periodic live performances.

When I was very young I used to ask my mother if there was a danger in my one day becoming a painter. It seemed to me that there was a limit on how many paintings the world could sustain, a limit to what you could paint without repeating yourself. She told me not to worry, that there was no limit. But I didn't believe her entirely. I still don't. It might be true that there are endless things to paint, but what of the eye and the hand? Isn't there a limit to their strength, a sort of total number of strokes the hand can make? Isn't there a finite amount of light the eye can receive?

So it seems with words. The throat and the tongue, the teeth and gums, they too have a set capacity for bringing forth words. And after the profusion of my own words, after I'd said close to a billion and beyond, my own voice started to grow weak. I didn't stop though, because by that time, the short films had attracted an ardent audience. People seemed to care about what I had to say. I started to get letters of encouragement and letters with questions and letters with suggestions.

Isn't this exactly what I'd wanted from my words in the first place? Weren't words the very thing that could dispel my nagging sense of isolation? I felt my voice growing weak though, after almost six months of overuse. "I've got a hoarse voice" is what I'd tell my wife. When I called my ENT he thought it might just be a continuation of a reflux issue that was irritating my vocal cords. After swallowing a small mountain of anti-acid medication my voice just got worse. I went to see my ENT again. In went the tube with the camera on the tip. Then up into my left nostril, and slowly, eerily, it snaked into my throat. There on screen, at the edge of my right vocal cord, I could see an angry red bump. Hemorrhagic vocal nodules they're called. Adele had one, so did John Meyer and Keith Urban. All of them, like me, seem to be people with a desperate need to connect.

The treatment is simple, a blast or two of a laser and it's gone. The nodule is, thank God, totally benign, but here's the rub: Starting now and for four weeks after the surgery, I will need to stay completely silent, for a grand total of six weeks minimum. I'm only two days in and though the Monk-like silence (my silence at least) has been frightening (and costly due to cancelled engagements) it also feels -- if only for its novelty -- like something vast and even beckoning.
Not having the last word, not being clever, not being argumentative, not having to pretend to have all the answers...

These are new things to me. I will still have many things to say during my enforced vocal rest, but since writing or pantomime or dancing what I want cannot be immediate, it will by dint of its slowness, be deliberate. And I can see the value in that deliberation -- I can see this even at the very beginning of my going silent.

More:
singerssinger songwriterGPS For The SoulJohn MayerJudaism
Newsletter Sign Up
An essential daily guide to achieving the good life
Subscribe to our lifestyle email.
Successfully Subscribed!
Realness delivered to your inbox