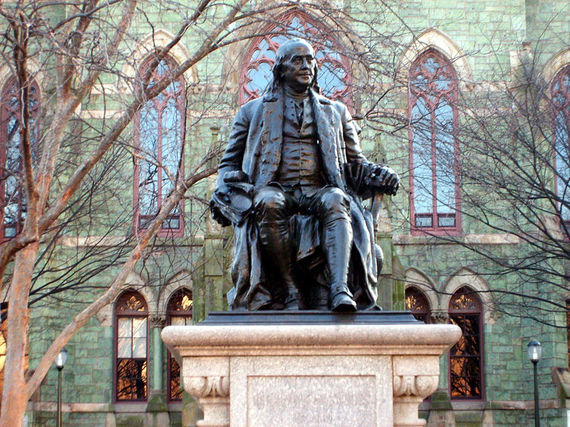 I just read a viral article from VICE entitled: "Going to an Ivy League School Sucks." As a student at Penn, Philadelphia's Ivy League school, I was curious.

Mr. Schwartz makes some good points. There is certainly a lot of pressure to do well at college, and being at an Ivy probably magnifies that pressure. However, Mr. Schwartz paints the Ivy League with a broad brush, and I want to add some balance to the conversation.

My initial reaction to the article is that Mr. Schwartz may have simply chosen a school that's not a good fit for him. He decries the tendency for students to throw aside their passion to major in financial economics. He claims that financial firms cherry pick prestige-hungry Ivy Leaguers. Schwartz attends Columbia, which is smack dab in the middle of the world's largest financial center. I am not a Columbia student, and so I can't speak to the school's culture - but I can guess that Columbia students may be drawn to finance simply because of their proximity to the world's financial powerhouses. When you live just a few miles away from some of the world's wealthiest and most powerful people, it is only natural to want to follow in their footsteps. The pressure Mr. Schwartz is feeling may be more indicative of his location than of the Ivy League as a whole. There are eight Ivies, and each one is different.

Still, there is no denying that a lot of Ivy Leaguers major in finance or financial economics. I am a finance concentrator at Wharton - Penn's business school and a well-known feeder to Wall Street - but I hardly feel that I was pushed or pressured into finance. More so than anything else, I've found that students at Penn have big dreams. They want to be doctors, lawyers, artists, community leaders, business titans, or politicians. The reason many of these students pursue finance and financial economics is because they know the core skills of finance - quantitative analysis and judging value - are essential to success in virtually any field. At a school like Penn, I did not drop my passions to pick up a briefcase. Through a mixture of phenomenal teachers, extracurricular engagement, and close mentors, I have learned that finance is a valuable (and interesting) skill that can help me pursue my interests. This manifests itself in the prevalence of double-majoring - I know students in my major who are complementing their studies in finance with courses in entrepreneurship, social impact, music, anthropology, the fine arts, and the hard sciences. They know a finance background is a necessary part of succeeding in their field, whatever field that may be.

Mr. Schwartz also discusses the competitive pressures and stress that Ivy League students often face. Is Penn a competitive place? Absolutely. Penn students are passionate, and wherever there is passion, there will be late nights and competition. But Penn is also wonderfully collaborative and supportive. Ivies are flush with resources and people to help you. In recent years, Penn has become a leader at fostering supportive environments for students, creating and maintaining thriving cultural and peer support groups. Many in-class assignments are done in teams, and your success is contingent upon the success of your peers.

What I find most objectionable about Mr. Schwartz's article is not what he wrote - it's what he neglected to mention.

I can't speak for all the Ivies, but Penn has afforded me some of the most valuable and exciting experiences I could imagine. Even in my first semester, Wharton challenged me to work on a team and essentially become a management consultant for a local non-profit. I have taken courses from industry experts - the scholars who wrote the seminal texts are often lecturing in my class. Some of the world's most recognized and authoritative professors have given me hours of advice and mentorship. This past semester, one of my professors went straight from talking to me about graduate schools to delivering commentary on CNN. I even got the chance to perform research with a world-renowned substance abuse researcher and policy maker - we co-authored a paper, which we are currently submitting to academic journals. At Penn, I have access to the world's thought leaders.

In two years at Penn, I have had the opportunity to interview a renowned Carnatic (South Indian) musician in an ethnomusicology course, engage in participant observation in an anthropology course, and make a tangible contribution to the community in an environmental health course. Each class was taught by either a leading or up-and-coming scholar in his or her respective field. Where else could a "finance major" get that kind of exposure to the liberal arts?

Beyond the classroom, the extracurricular opportunities are unparalleled. There are literally hundreds of clubs on Penn's campus, and each have the resources to contribute to Penn's vibrant culture. Whether you are interested in a particular vocation, community service, an art, a social cause, a sport - or heck, ping pong - there's a club and a community for you at Penn. Ivies have the resources to guarantee these groups can not only exist, but thrive.

Finally and most importantly, the opportunities for personal growth at a place like Penn are simply outstanding. Want to go hiking in Patagonia? Want thousands of dollars to start a company? Want to learn about new cultures or fields of study? Want to pursue undergraduate research, and get paid for it to boot? You can do it all at a place like Penn. Not to mention, Ivies foster powerful alumni networks, which give undergraduates access to some of the best mentors in the world.

Mr. Schwartz's article made going to an Ivy seem like an empty dream - maybe even a hoax. Honestly, after two years, I wouldn't trade my time at Penn for the world. If you have the opportunity to go, I strongly recommend it. Going to an Ivy (or any college) involves a lot of sleepless nights writing papers and preparing for exams. There's no denying that. But the Ivy League is also a fabulous place to grow, learn, and develop meaningful relationships.

If you're still worried, come to Penn - I guarantee it doesn't "suck" here.