The Congressional Budget Office (CBO) just released the 2015 version of its Budget and Economic Outlook. This year's edition contained no real budget surprises: The federal budget remains on an unsustainable course driven by rising spending in mandatory (entitlement) programs despite rising revenues (including as a percentage of GDP) and unrealistic caps on defense and non-defense discretionary (annual) spending. Bad, but not news.

A different way to wrap one's head around the bad news is presented in the chart below. 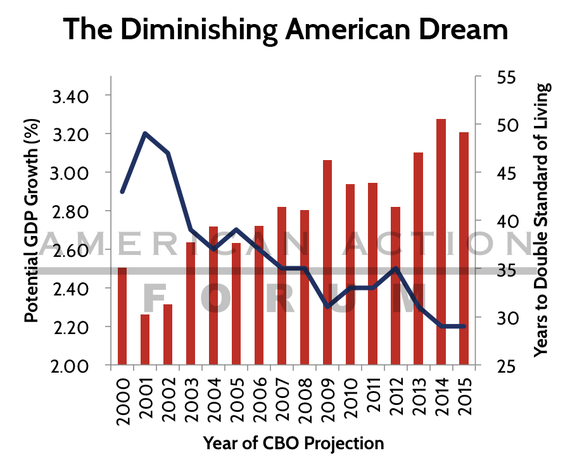 The solid blue line shows CBO's successive estimates of the average growth rate in the final years of its economic projection, beginning with the 2000 report and shown each year to the present. Clearly, the CBO has dropped its projected growth enormously.

The American dream may not be dead, but it is now in too distant a future for many to see and believe. The top policy priority should be to enhance growth prospects.