Many view gold as a currency alternative as central banks print money and debase their currencies. Whether or not gold is a good investment is a matter of opinion versus other alternatives.

The following chart reflects my own view of conditions that are historically good and bad for gold. Central banks' money printing on an unprecedented scale also makes the case for gold as a currency alternative. 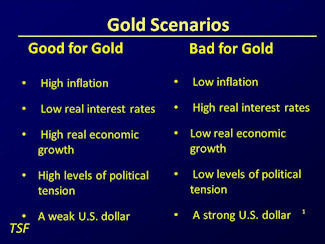 Disclosure: Precious metals make up more than 10% of my personal portfolio on average. That position is subject to change.

In October 2010, Bart Chilton, a commissioner for the Commodities Futures Trading Commission (CFTC), announced an investigation into silver manipulation. In the video below, I said the Wall Street Journal wrote a nasty article about Chilton shortly thereafter. My memory was incorrect. It was much worse than that.

The article was about retiring CFTC Judge Painter after he issued an Order requesting that all of his seven open cases not be transferred to Judge Levine, another CFTC judge. Painter alleged that when Levine first took the job twenty years ago, he told Painter he had promised CFTC Chairwoman Wendy Gramm that he would never rule in favor of a complainant.

Judge Painter's order said that complainants, say, complainants about silver price manipulation or other commodities price manipulation, "run a hostile procedural gauntlet until they lose hope, and either withdraw... or settle for a pittance, regardless of the merits of the case." Painter stated that Levine "has fulfilled his vow."

It's ironic that Painter's Order referenced an earlier December 13, 2000, Wall Street Journal article about Judge Levin's appalling record: "If You've Got a Beef With a Futures Broker, This Judge Isn't for you - In Eight years at the CFTC, Levine Has Never Ruled in Favor of an Investor."