He that can have patience can have what he will.
Benjamin Franklin
We are still not convinced that Gold is fully out of the woods. Peter Schiff is busy telling everyone that it was a bad idea to have sold Gold in 2011 and that it would $2,000 by 2009 and $5000 by 2013. We beg to differ for the trend indicates otherwise, and so does the price of Gold; Gold never traded to $2000, let alone $5000 in the stated time frames. He is coming out with scary scenarios though they are not as grandiose as James Sinclair's scenario that calls for Gold to move to $50,000 an ounce. Even, when we dream we find it hard to envision such a price, so it is interesting that he can come up with such targets and do so with a straight face when Gold has not even traded to $2000.00. This is nothing but fear mongering, and the markets are ruthless to those who are driven by fear or euphoria. If Gold were to trade to $50,000 an ounce, you would be living in a cave with bats and guns, as the world as you know it would have fallen apart. Individuals like this hoodwink the daft fashion hard money crowd into thinking Gold is the solution to all their problems. We use the word fashion because they know just enough about hard money for it to be dangerous to their health and wealth.

As long as man does not evolve, man will find a way to rob from Peter and Paul. So Gold standard or rubbish standard matters not for you need to change the mindset of the beings that control either medium. A little knowledge is extremely dangerous and worse than ignorance and most of the hard money crowd understands next to nothing when it comes to Fiat money. That is why the Fed gave the hard money crowd a thrashing that they will never forget. It inflated the money supply to mind-boggling levels, strengthened the dollar and Hammered Gold. How did they achieve this feat? They controlled the velocity of money, and they were able to have their cake and their pie. Now they are buying up Gold at a lower price with the extra worthless paper they created while the hard money experts keep chanting nonsense that the Fed is backed into a corner. If it's a corner, it must be a pretty cushy corner with all the comforts of a five-star hotel. Brilliant albeit nefarious individuals run the Fed. Gold has not fared all that well in the face of a weak dollar (take a look at the charts below), and most of our indicators are now in the extremely overbought ranges. The trend is still neutral, but as it moved from negative to neutral, we will not be satisfied till it turns bullish. It goes without saying Gold will experience another sharp correction, the only question that remains is whether the correction will end with a higher low or a lower low on a monthly basis. A lower low will indicate that a bottom is not in, and more consolidation is necessary; a higher low will suggest that a bottom is in place and that the trend is likely to change direction.

The charts provide some interesting data 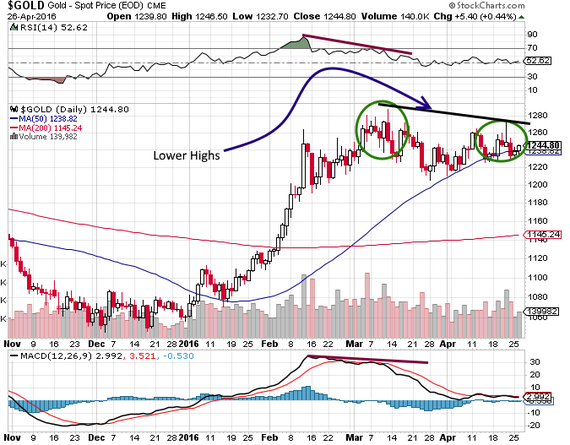 Note that Gold has been putting in lower highs since March and it has also triggered several negative divergence signals on the chart. 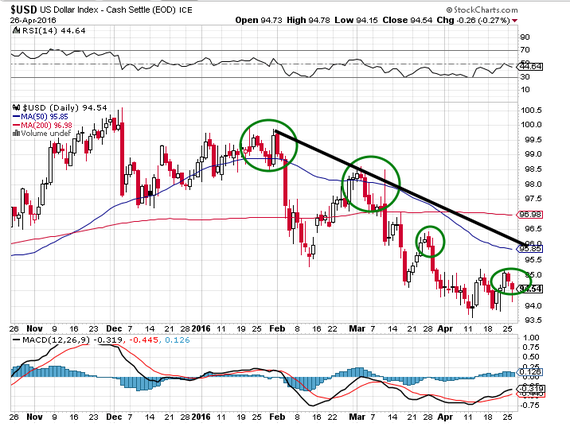 From Feb to March of 2016, Gold responded in the correct manner, as the dollar traded lower, it traded higher. After that, the situation changed, and Gold has been putting lower highs while the dollar has traded to new lows. This indicates that one market is out of sync, and this market is Gold. Thus, the dollar is likely to bottom and rally again, while the rally in Gold is likely to fizzle out. This initial strength in Gold is the perfect setup to knock the early bulls out; we would not be surprised if Gold experiences one final move down to the $1000 ranges, before putting in a multi-year bottom.

We are not ready to jump on the Gold bandwagon yet and have maintained this position since we bailed out in 2011. The trend would need to turn positive before we turn bullish on gold and so far the trend based on our trend indicator is neutral. Hence, it would not come as a surprise to us if Gold were to test the $1000 ranges again.

However, we have also stated before if you do not have a position in Gold bullion, then it would make sense to put some money into Gold or silver bullion. Wait for strong pullbacks before committing new funds. Allocating some money does not mean backing the truck up; you allocate a portion of your funds to the metal. We would refrain from jumping into precious metal stocks right now. Astute investors would be wise to pay attention to how Gold stocks hold up when Gold corrects again. The ones that hold up the best will be the one's that lead the way up on the next run.
An ounce of patience is worth a pound of brains.
Dutch Proverb