Before the sun has risen, a line of vehicles crosses rural Nevada's Virgin River heading to a gravel parking area at the head of narrow and winding New Gold Butte Road. Coinciding with Earth Day, the indigenous Moapa Band of Paiute along with local environmental protection groups have organized an 11-mile Culture Walk to raise awareness of the damage being done to the culturally important and environmentally sensitive area of Gold Butte.

There is still an early morning chill in the air as flag standards are lined up representing the Moapa Band of Paiute, Las Vegas Paiute Tribe, Shivwits Band and Paiute Indian Tribes of Utah. The Maori Tino Rangatiratanga flag from Aotearoa (New Zealand) is also present in support, along with a kiwi contingent.

After a dawn prayer, former Moapa Band Chairman William Anderson speaks of the importance of the Gold Butte area, previously inhabited by the Paiute's nomadic ancestors, the Tudinu, known as the Desert People. The indigenous name for the area is Mah'ha ga doo, (Many Bushes) due to the abundant vegetation found there. Amongst the towering sandstone formations are numerous examples of ancient petroglyphs, telling stories of a deep spiritual connection with the land.

The area is currently in the hands of the Bureau of Land Management, but in part due to disputes over land use and an intimidation campaign of BLM staff, the environment is under threat on numerous fronts. Petroglyphs have been graffitied and used as target practice, with some sections cut out and removed altogether. Burial sites have been violated and delicate vegetation on the desert floor crushed by off-road vehicles. Armed with images showing both the natural beauty of the area, and the damage being done to its cultural sites, Senator Harry Reid is using the Antiquities Act to petition President Obama to designate National Monument status.

With the assistance of support crews supplying water, snacks, copious sunscreen and Band-Aids for blisters, all the walkers reach the final tent at First Rock by noon. A Paiute youth group cooks up frybread tacos, and a trio of musicians perform traditional bird songs that have echoed through the Gold Butte valleys for centuries. The descendants of the Desert People are showing the way forward to a harmonious co-existence with the natural environment and the cultural treasures it contains. 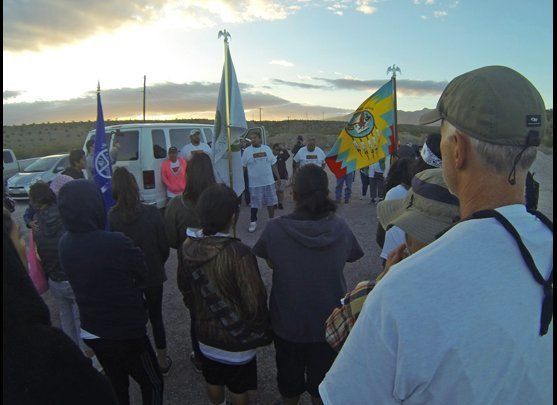